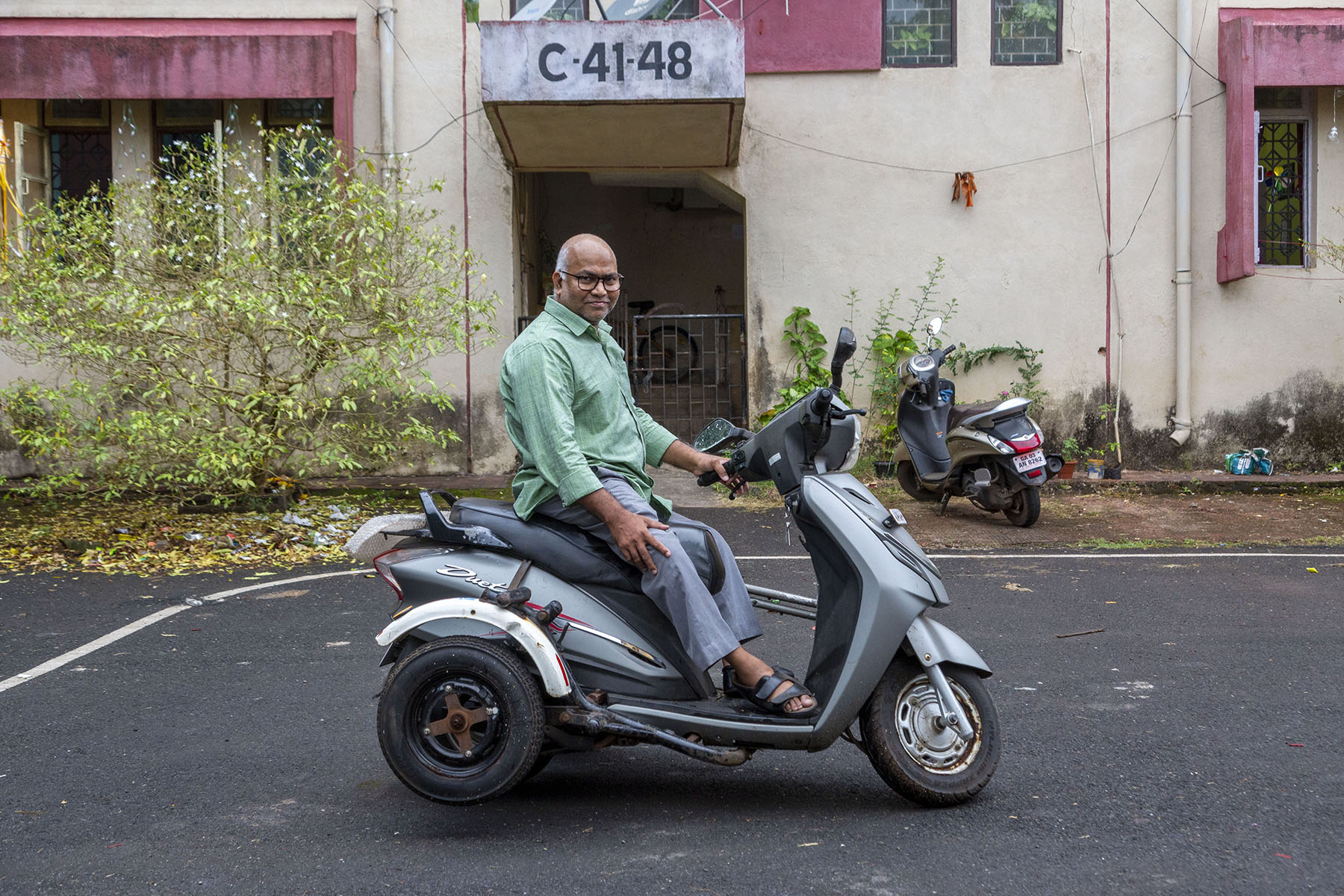 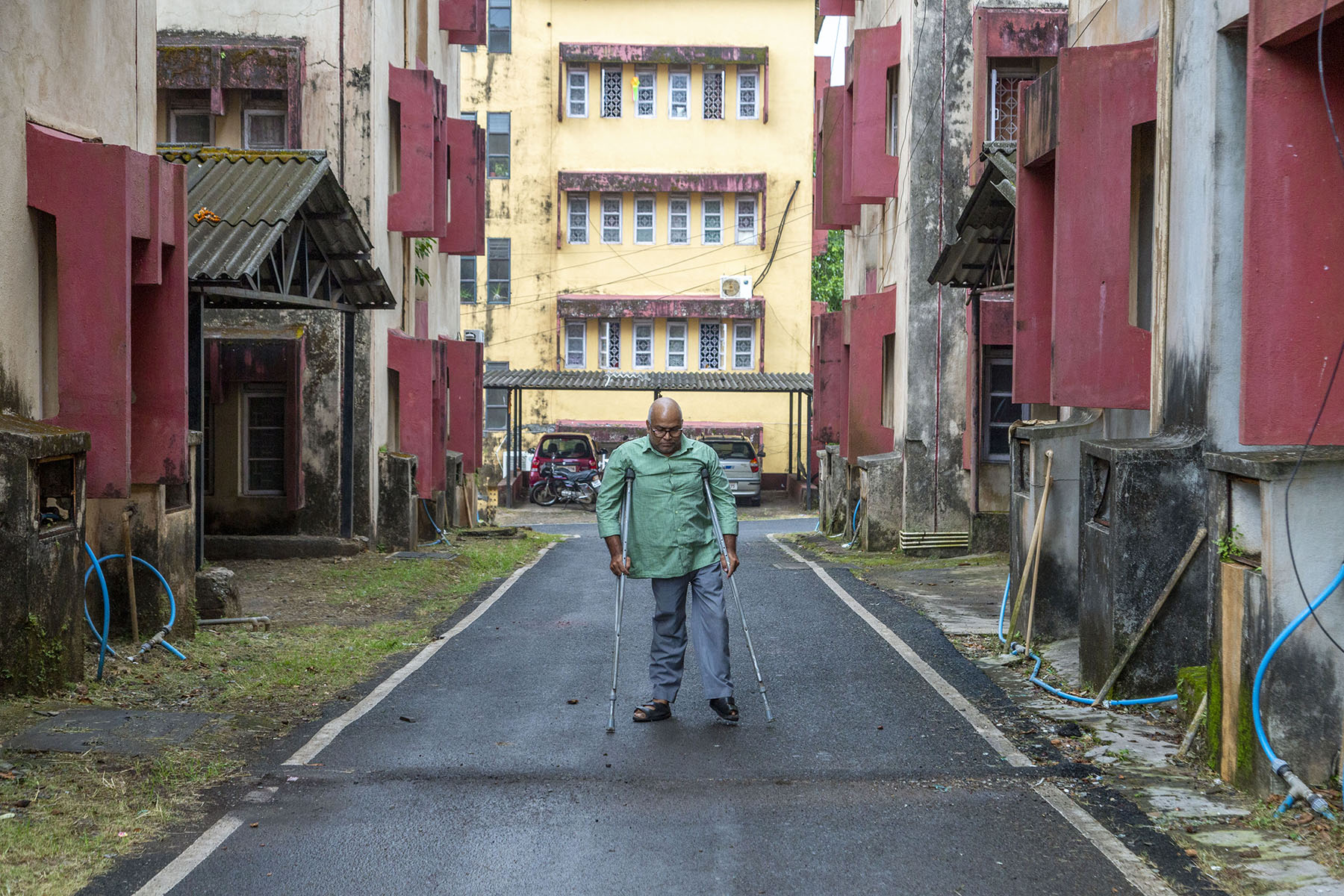 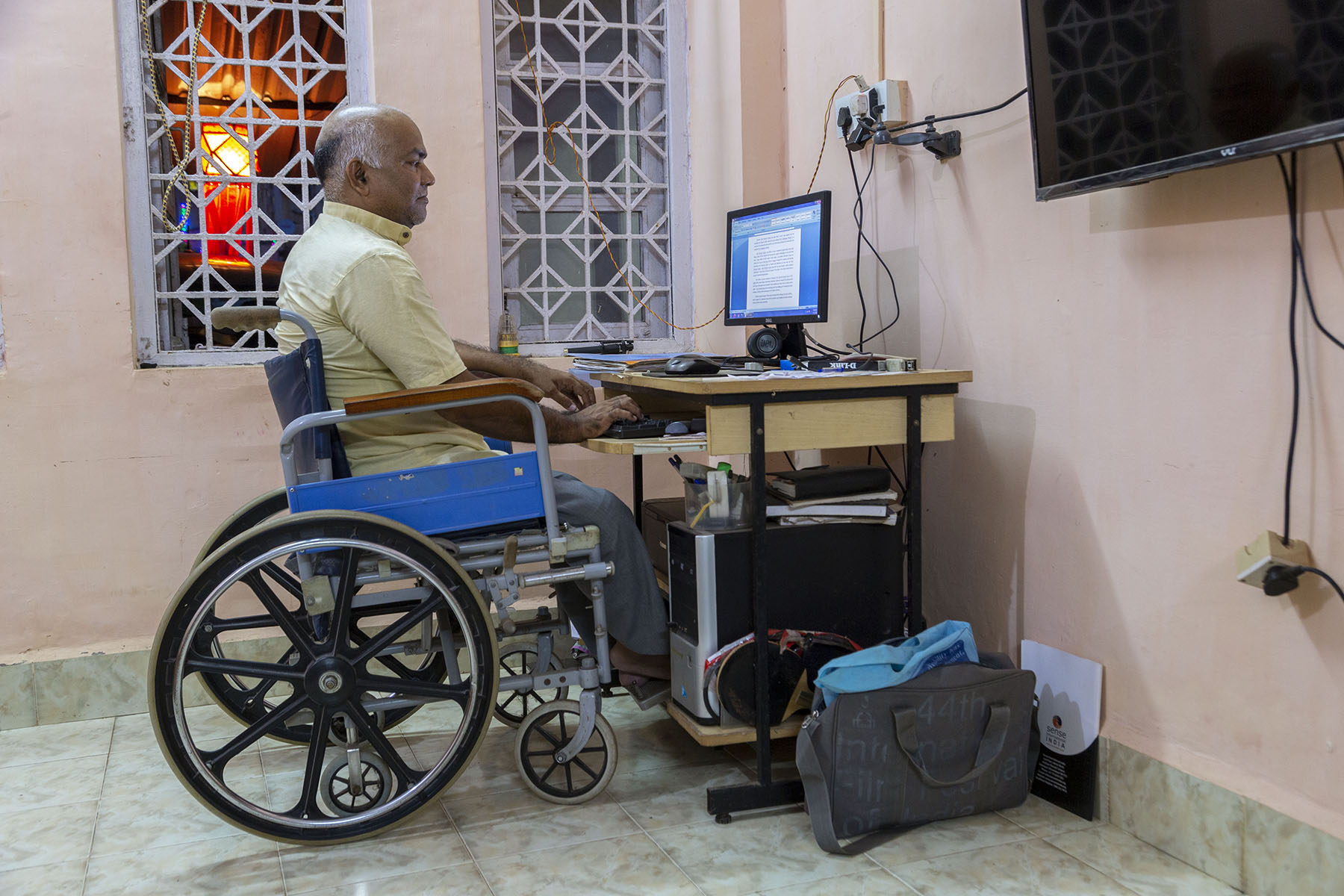 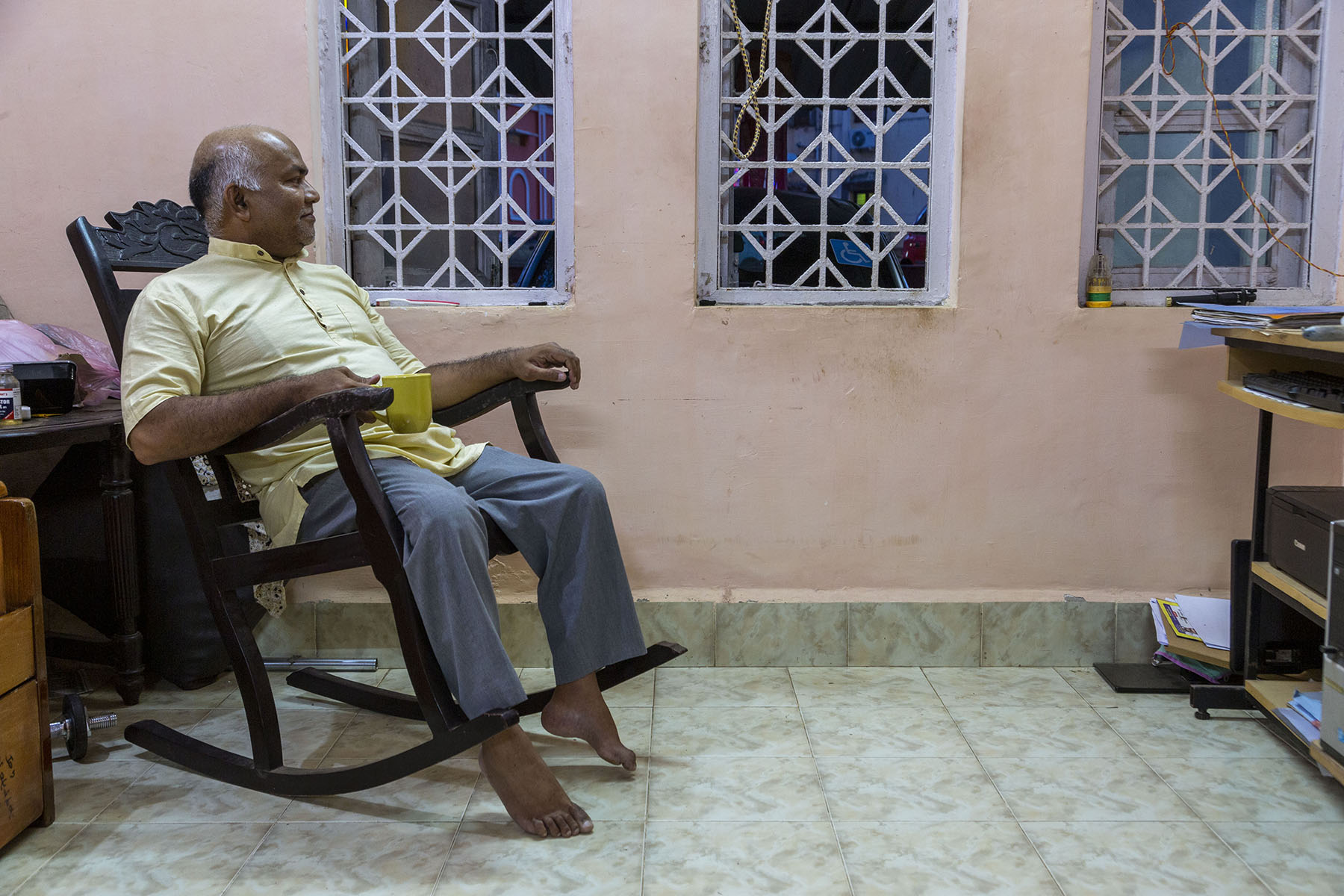 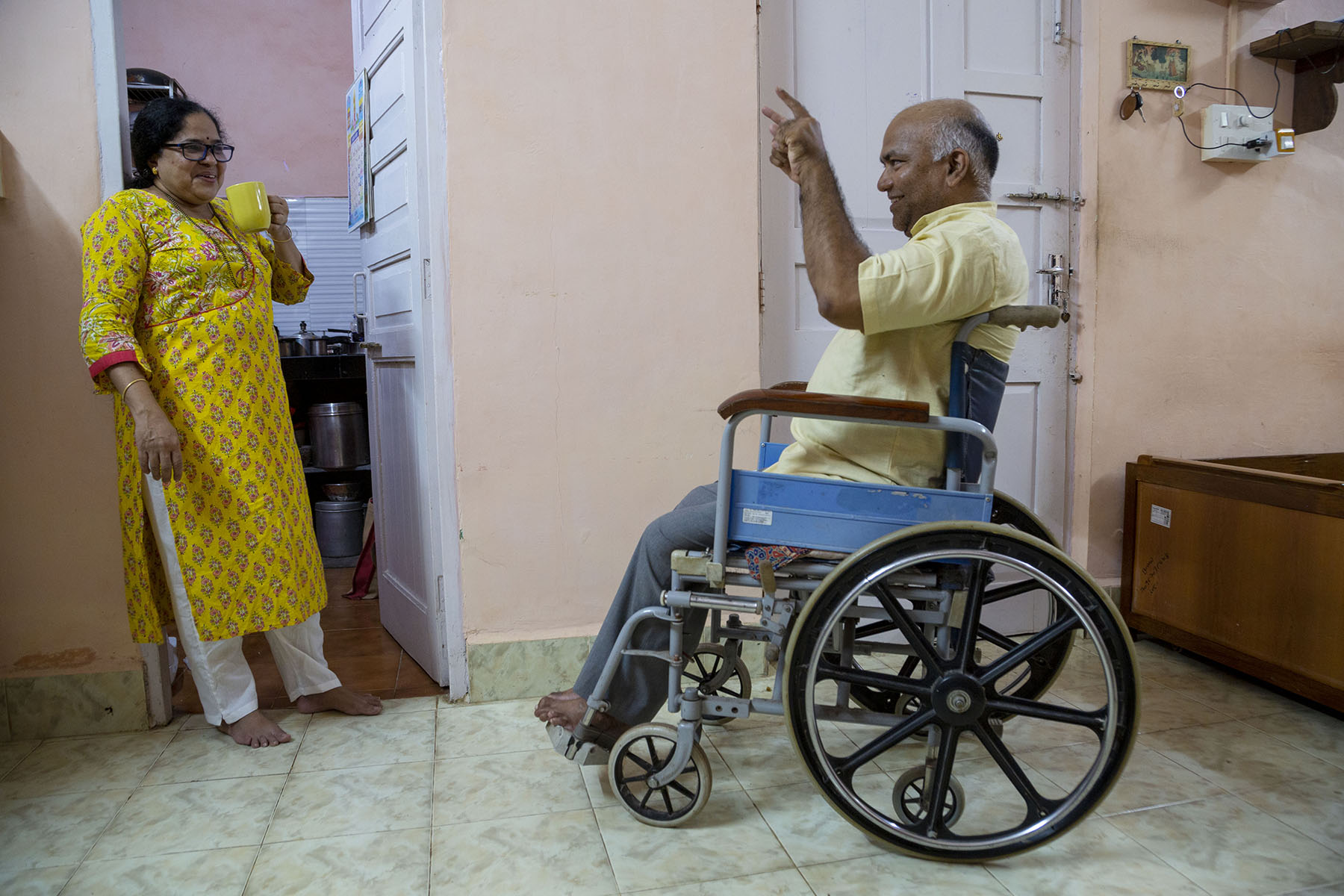 “A common refrain I’ve heard is: yeh bechaara kya karega (what can this poor fellow do)”

Imagine that you see a couple in a car. You are told that only one of them has a driving license. And that one of them has a locomotor disability of almost 90 per cent. You might straightaway assume that the disabled person is in the passenger seat. And you’d be quite mistaken if the couple is Vishant Nagvekar (50) and Sunita Nagvekar (53) from Panaji / Panjim, Goa. Vishant, a polio survivor who uses crutches and a wheelchair, drives a modified car with hand controls. Sunita hasn’t learnt how to drive, so he takes her shopping.

Born in Mayem village in Goa, Vishant contracted polio at 18 months. After primary school he stayed with his grandmother in Tivim until he completed his degree in Commerce. He also studied computer science and ran a computer institute for six years. After working for a private pharmaceutical company in Tivim for four years he secured a state government job in 2001. He is a Group B gazetted officer currently working in the Forest Department.

Vishant has borne the brunt of social discrimination throughout his life. “When my mother used to drop me to school people would ask her, why bother to get him educated?” he recalls. “In college there was a professor who said, even if you study, who will ever give you a job? At job interviews I would be asked, how will you commute to work?” He found that even when jobs were reserved for persons with disabilities, preference was given to those with the bare minimum disability of 40 per cent.

His cumulative negative experiences have brought out his combative side. For the past 15 years, Vishant has been striving for accessibility for the disabled. He counts himself lucky if he gets a response to one out of every 10 letters he writes to the government. There is an immense lack of awareness all round, and even well-intentioned measures often end up being half-baked. For instance, he says that if he insists that a building have reserved parking for the disabled, they thoughtlessly allot space behind the building, forcing him to take a long and roundabout route to the front entrance. When a ramp is built, many things can go wrong: it might be too steep, or there might be a few steps leading to it, or a large dustbin in front of it!

Vishant relates how a brand new central government building had all kinds of accessible features inside. However, the builders forgot to make the entrance accessible! They eventually created a special accessible entrance on the side of building, but he found this door perpetually locked. He points out that the state’s hospitals are not accessible. He got Goa Medical College to create three reserved parking spaces for the disabled and also separate queues for them at the counters and the Out Patient Department. The state’s public transport, however, remains regrettably inaccessible.

Para sports have attracted many Indians with locomotor disabilities and Vishant is no exception. In 2009-2010 he participated in a National Wheelchair Lawn Tennis tournament in Bengaluru and in 2014, represented Goa in a National Wheelchair Basketball tournament. These sports require sports wheelchairs, which are specially designed and very expensive. Therefore right now he is concentrating on Para Table Tennis and his team has played in two district-level tournaments.

Sunita was in her forties when she married Vishant in 2011. Although theirs was an arranged match her parents were initially a bit reluctant until they saw how independently he managed his life. His parents live in their ancestral home in Mayem, where his sister-in-law and children also live after his brother died of a heart attack in 2012. Vishant support his parents financially and takes them to hospital when they fall ill (his father suffers from memory loss).

We wonder what those “yeh bechaara” folk would say if they met him today!