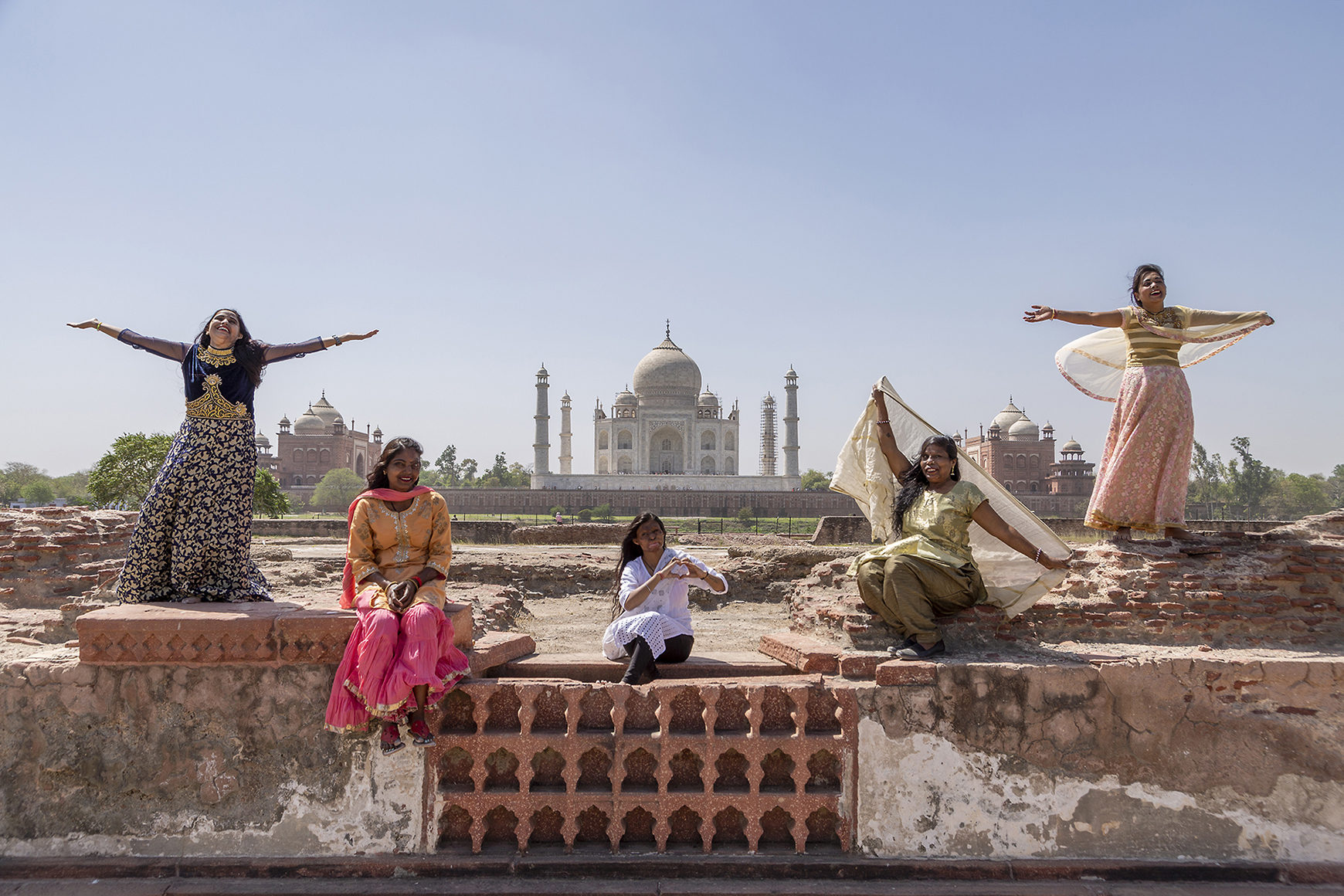 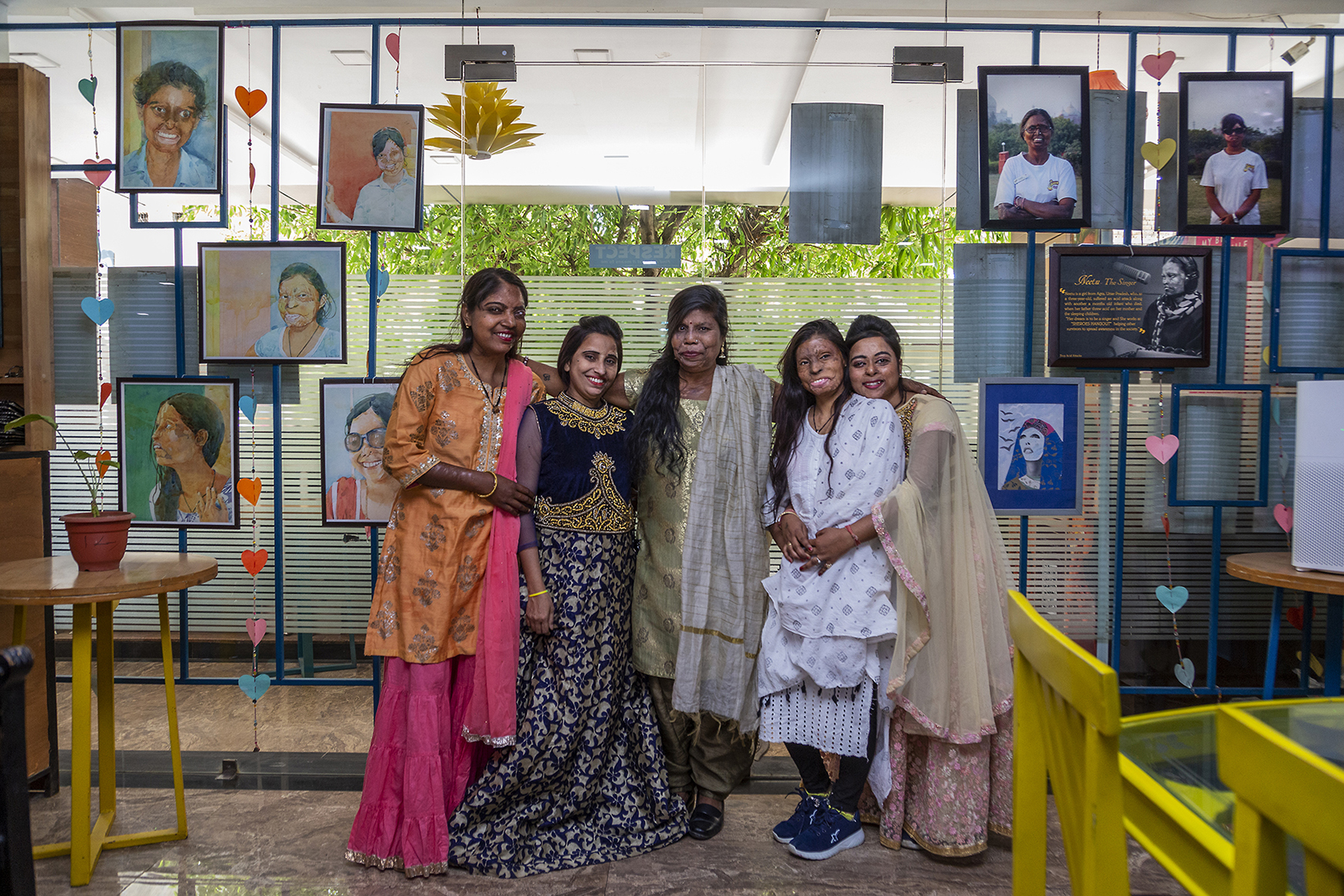 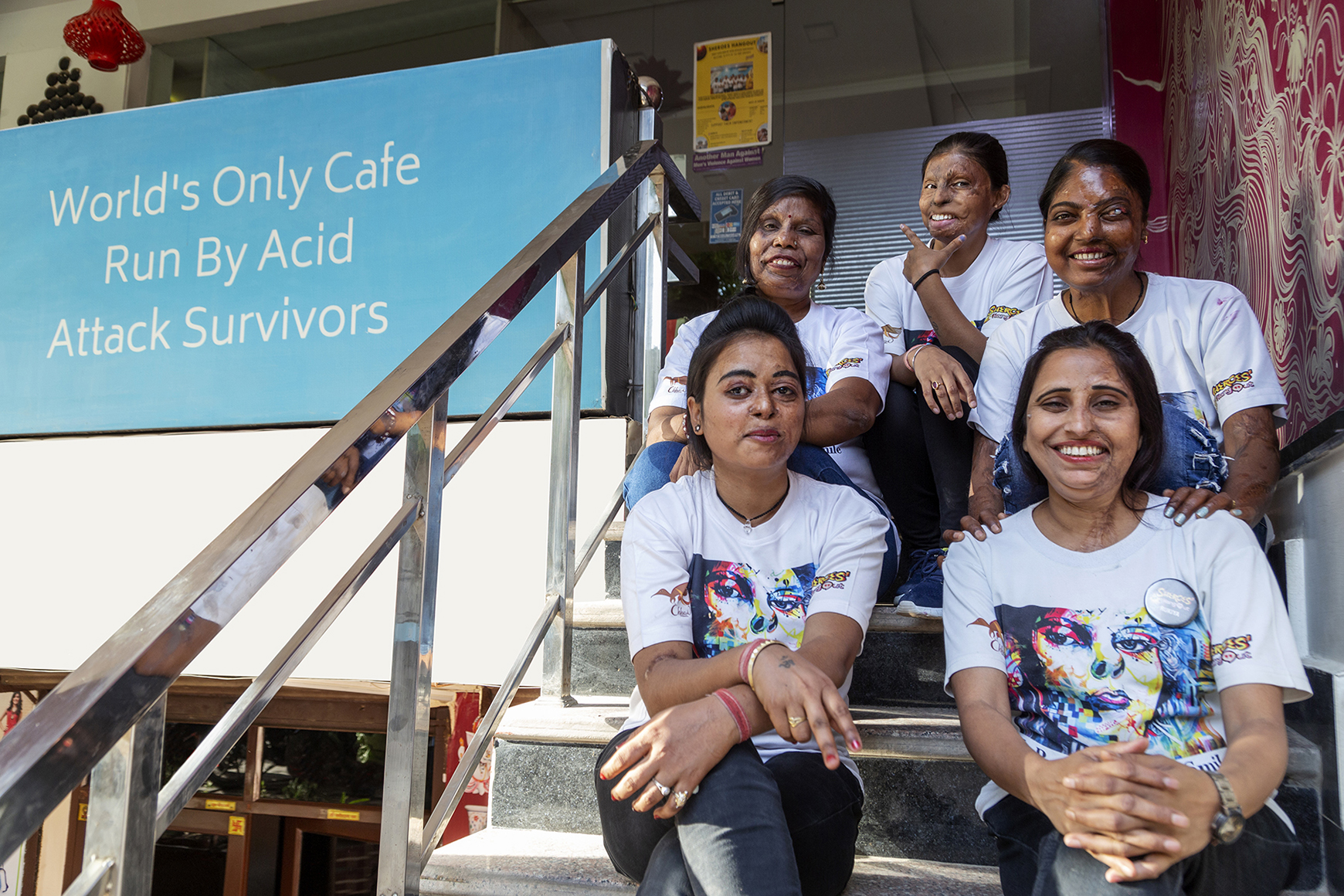 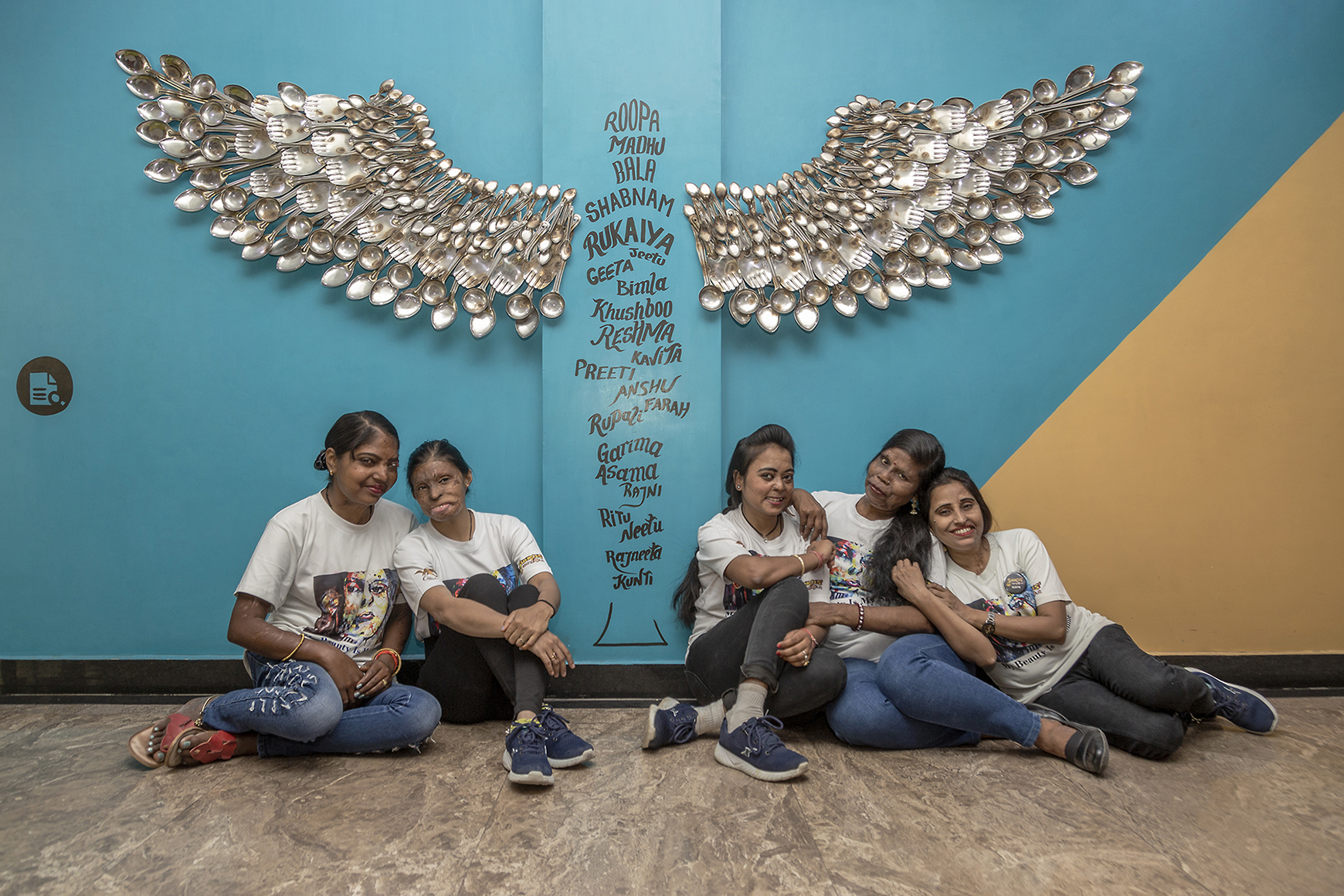 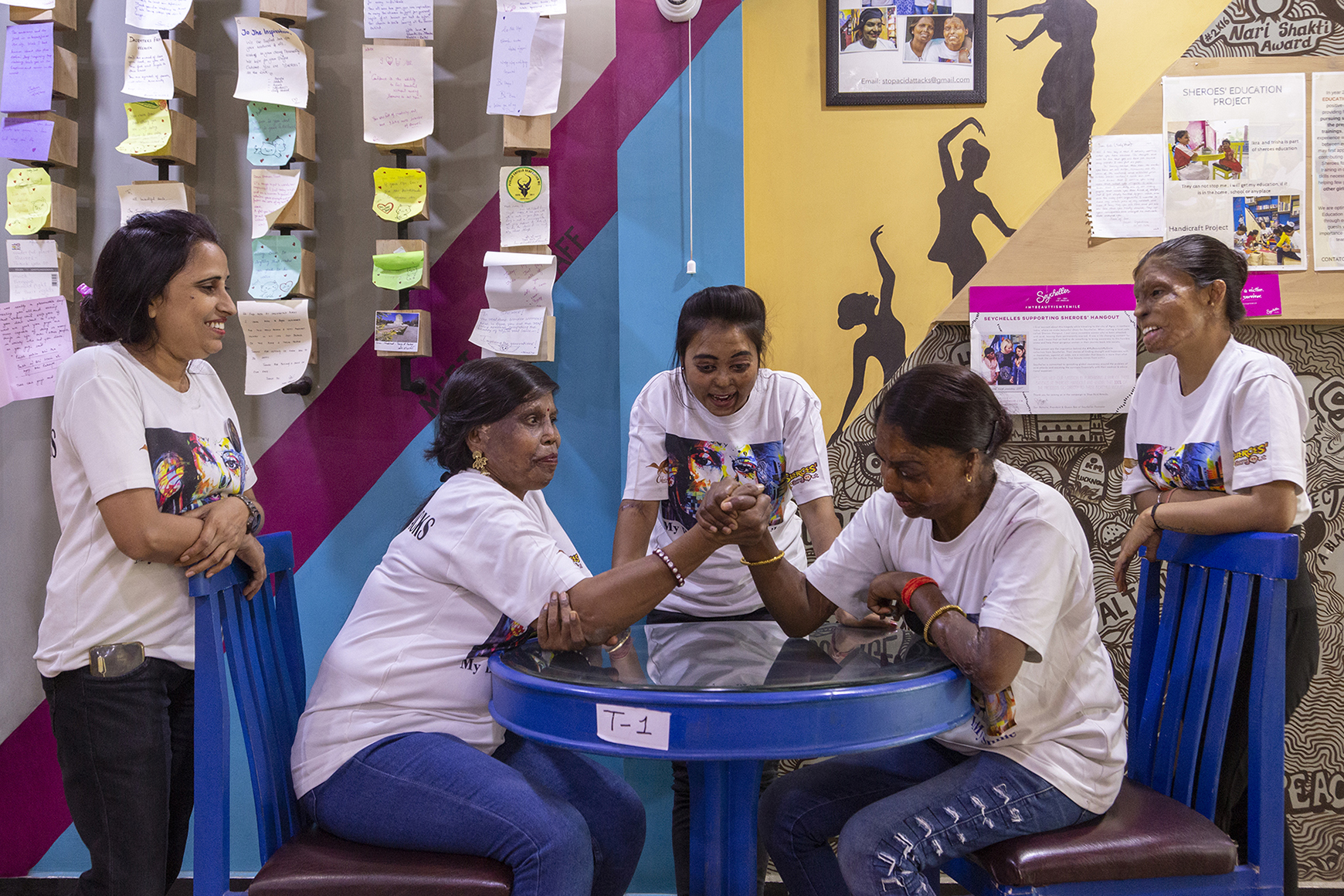 “Never look back. If you look back you will get stuck and you won’t be able to move forward”

The men vowed: ‘I will attack her such that she lives but no longer exists.’ But they were beaten hollow. Because the women cried out to these monsters: ‘You can never erase my identity. Its roots are buried deep within the rock of my conviction.’

The women who run Sheroes’ Hangout Café are as vibrant as its décor. “My beauty is my smile” says the slogan on their white T-shirts below the varicoloured image of a woman’s face. The back reads: “Stop acid attacks.”

The restaurant, started by Alok Dixit who set up the Chhanv Foundation, appears to sport every shade on the colour spectrum. The walls have sections painted in different bright hues, bold murals, framed photographs, and a gleaming pair of wings made of stainless steel spoons and ladles. Bookshelves are filled with books that you can read, swap or donate, and the handicrafts and clothes are for sale. The food is served on a “pay as you wish” principle.

Although the place is on the verge of closure after the pandemic choked the tourist flow, the waitresses welcomed us as warmly as ever. Of the 10 women who work in shifts, the five we spoke to were all teenagers from poor families when they were attacked. Rukaiya Khathun (37) was living in Aligarh as the fourth among seven children. At 14, she dreamt of becoming a fashion designer. Her mother sent her to take care of her older sister whose husband had physically abused her, causing a miscarriage. The husband’s brother, who lived in the same house, had his eyes on the young girl. He claimed he wanted to marry her. When her mother rejected his offer outright, he came home drunk one night, grabbed Rukaiya and poured acid on her. The screaming girl was not given medical attention. It was her elder brother who took care of her and pawned his bicycle to pay the hospital bill.

Dolly (20) had wanted to be a doctor; she was 13 when she was attacked. Roopa (27) was 14 when her stepmother poured acid on her face. Madhu (40) was 17 when a man whose marriage proposal she rejected attacked her. Her mother didn’t file a police complaint because the criminal threatened to kill her younger brother. Bala Prajapati (26) from Bijnor was 17 when a man who lusted after her mother was angered by the rebuff and took his revenge by killing all the animals they owned and pouring acid on Bala’s face.

One can barely imagine the years of isolation and depression they went through. Most of them got no justice or compensation, and multiple plastic surgeries were beyond their reach. None received the counselling that their privileged urban counterparts might have. Theirs was a lonely fight.

The women unanimously declare that Chhanv Foundation has given them a new lease of life and a new family. “I used to always wear a burqa that covered my face,” says Rukaiya, who has a nine-year-old son, “but now I am comfortable in jeans and T-shirt.” She is keen on cooking — she used to supply food for her brother’s mobile food cart — and would like to work in the café kitchen someday.

Roopa, who looks after the accounts and the boutique, says the café has given her the courage and skill to make her own way in the world. She designed the outfit that the women wear and wants to design clothes that she could sell online.

Dolly is one of the rare ones who managed to put her perpetrator behind bars and get compensation as well. The bubbly young woman likes to chat with customers when she takes their orders. She enjoys dancing and would like to open a dance academy.

Madhu’s mother worked hard to raise funds for her surgery. She completed her BA, got married, and needs to work to bring up her three children. The pandemic has robbed her husband of work as well. The Foundation trained the women in various skills during the lockdown, of which one was video editing, which Madhu is particularly fascinated with. She is proficient on the computer and can do data entry.

“In my village, girls of my community were allowed to study only till fifth standard,” Bala says. The Foundation gave her the opportunity to continue her education while working. She speaks for all the Sheroes when she says, “Life does not stop just because our faces are scarred.”