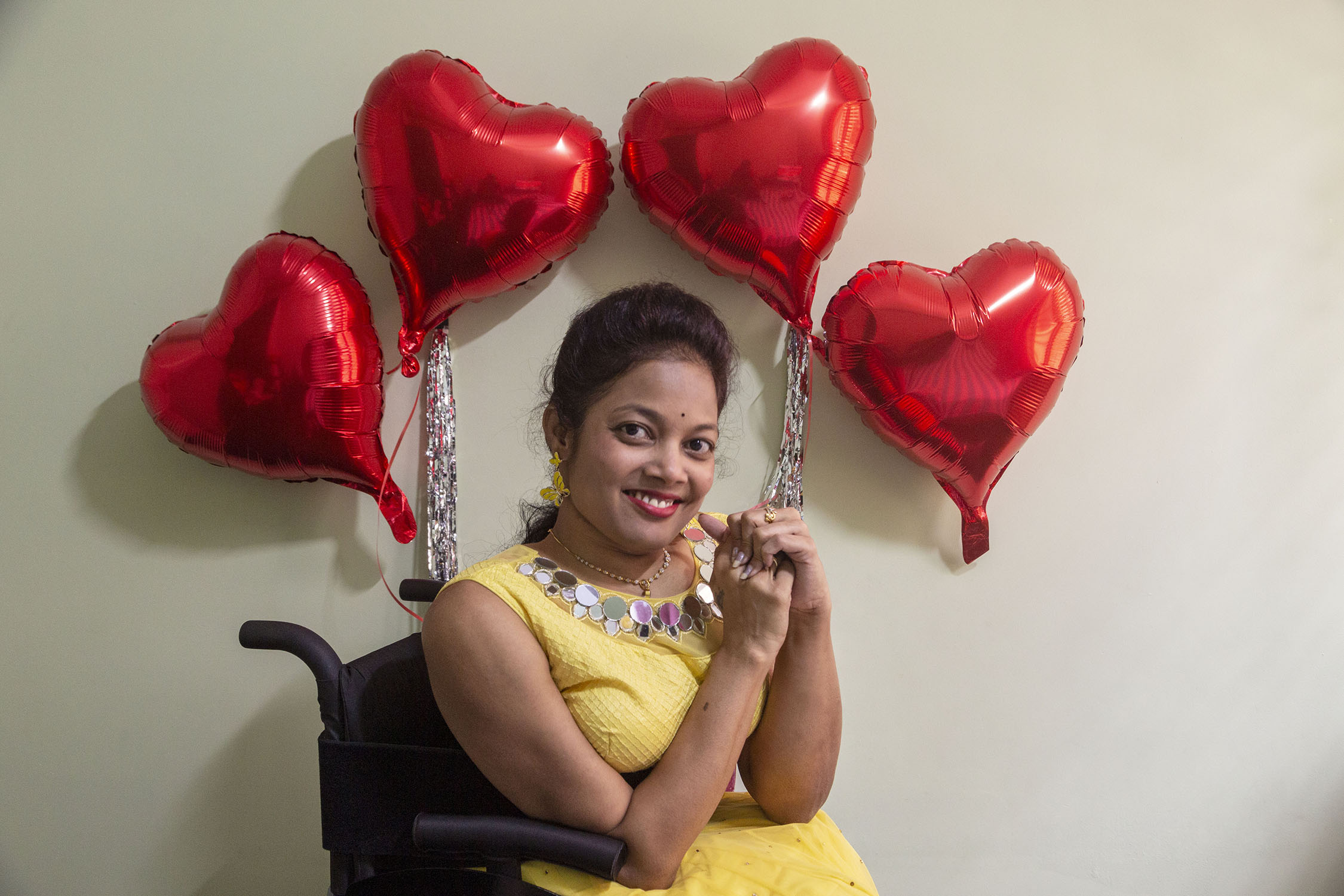 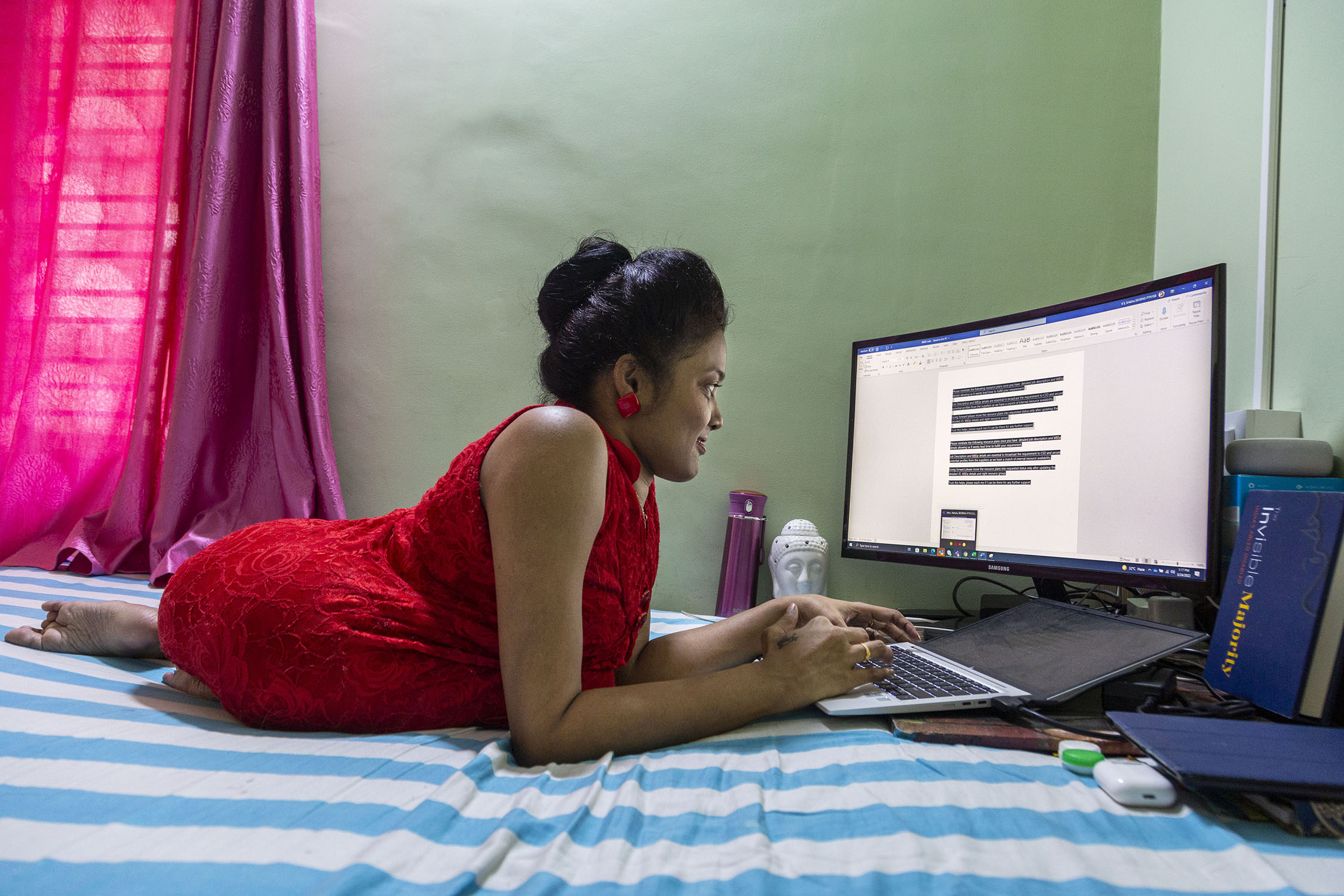 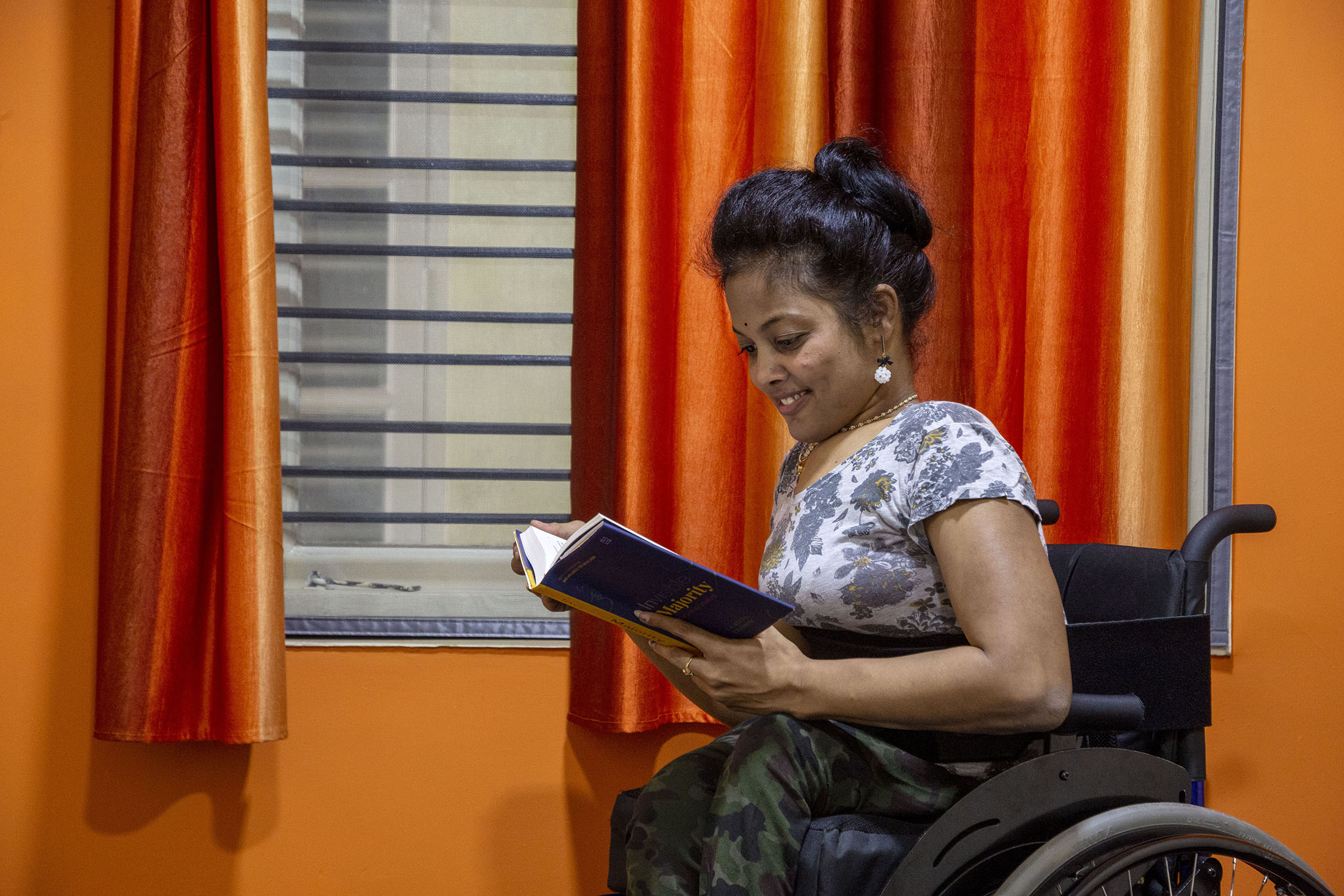 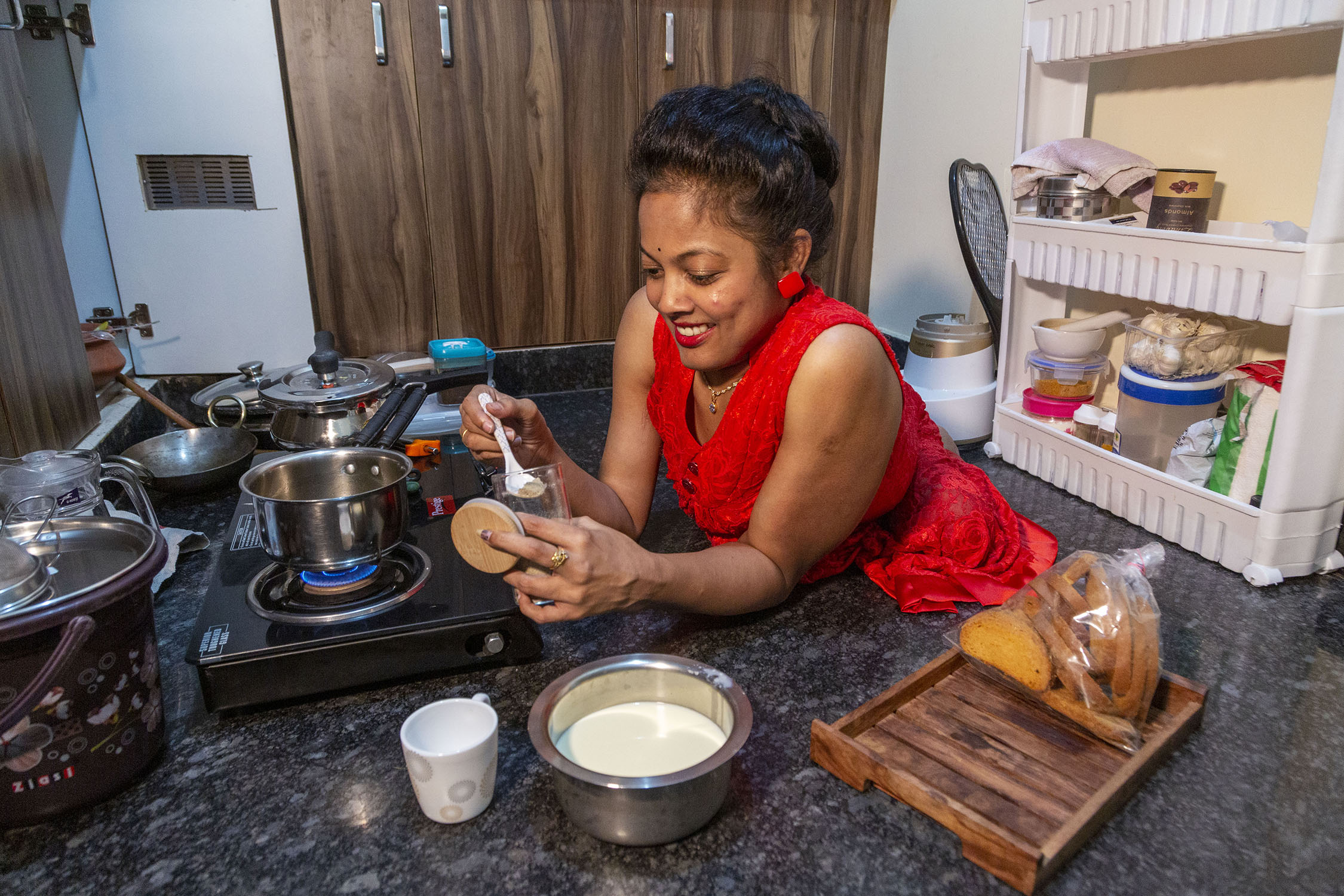 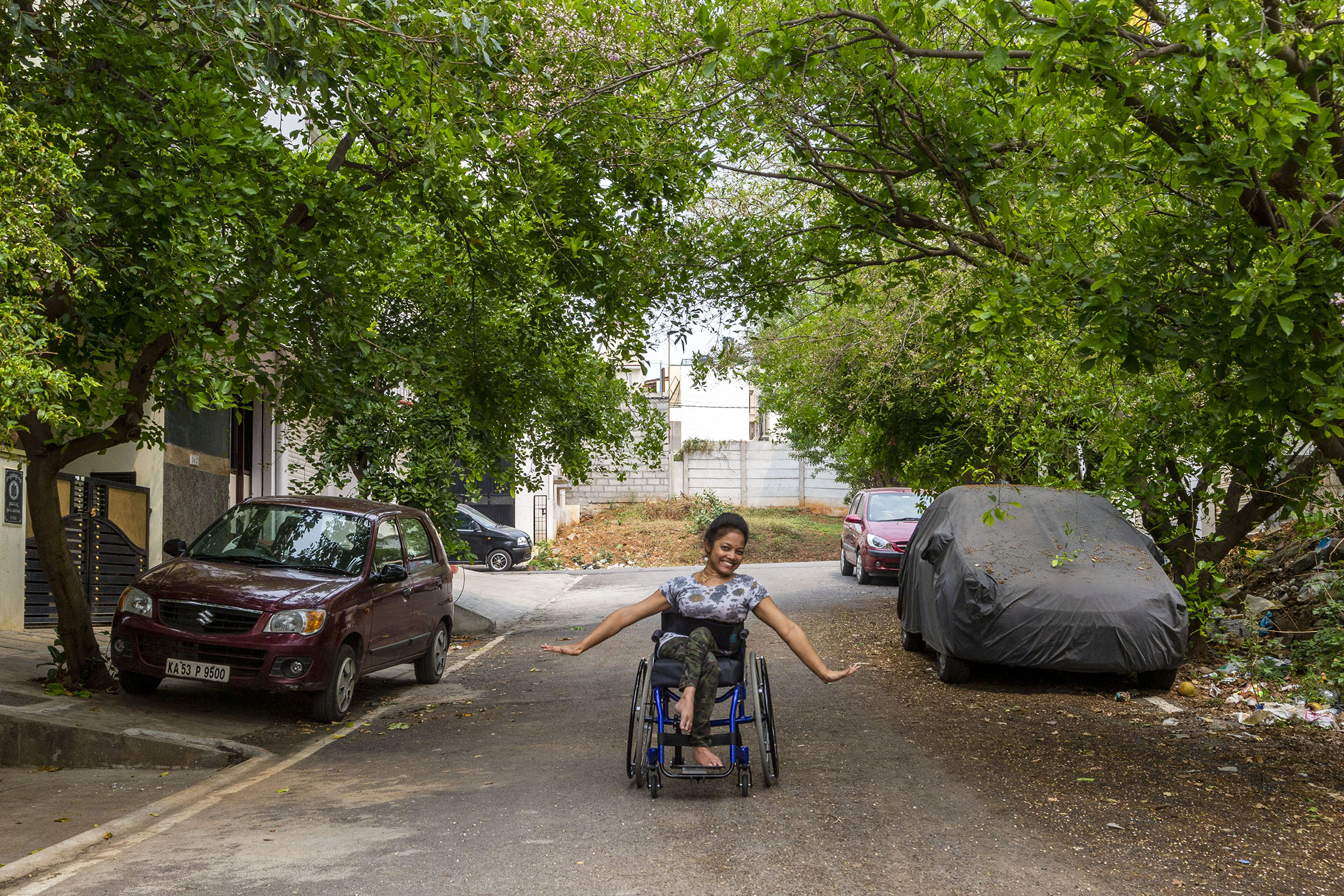 “I had to push myself hard to get where I am. Now I no longer have to prove myself to anyone”

Srilatha KS (38) from Bengaluru has many reasons to smile. The multinational corporation (MNC) where she is project management officer provides her smooth transport to an accessible office environment. She is part of the inclusive wheelchair-dance group The Invincibles. And she was named Miss Beautiful Smile at the Miss India Wheelchair 2015 pageant.

But the smile that Srilatha readily bestows on passersby was absent for much of her life. She was born in Siruguppa in Ballari district, Karnataka. Her father K. Sathyanarayana is a farmer and mother Susheela a housewife. “I spent my childhood amid paddy fields and rice mills,” says Srilatha. A pretty, healthy baby who started walking at 10 months and was the apple of everyone’s eye, she contracted polio at age three. It seriously impacted her lower body and confined her indoors, robbed of playmates and schoolmates.

There was no special school in Siruguppa and no mainstream school would take her. Susheela, however, was bent upon getting her educated and arranged for home tutoring despite relatives advising her not to “waste money” on tuition. “Education will make you independent” was a mantra she never tired of chanting to her daughter. No mollycoddling and no excuses for shirking studies. If an indulgent Sathyanarayana said “let her be”, Susheela would retort: “How will she survive after we go? She cannot live with her older brother.”

When she was in fourth standard an unrecognised middle school agreed to admit her. That is when the harsh reality of the inaccessible outside world hit her. Most spaces had no wheelchair access and so she moved on all fours. When she had to shift schools after seventh standard her parents heard the same line wherever they went: “Classes for seniors are on the first floor; she will find it awkward to crawl up the stairs.” She finally got admission in a high school. Although she yearned to attend college, accessibility hurdles stood in her way.

Open University was the only option for Srilatha. She completed PUC in Commerce. In 2004 she moved to Bengaluru for a one-year diploma in fashion design from the Indian Institute of Fashion Technology. She, her mother and brother stayed in a rented house. She had hoped for a job at the end of the course but was disappointed. In 2006 a neighbour referred her to a sales company where she worked for a salary of ₹4,500 and clung on for three years despite the arduous commute by public transport. She remembers her nightmarish monsoon travel: she would crawl to the bus-stop in the rain and request the driver to make a special stop just outside her office but when returning home no bus would stop for her there.

Srilatha reverted to distance education and completed her Bachelor’s in Business Administration in 2010. A fruitless job hunt followed, with a string of unsuccessful interviews. In 2013 a friend with Cerebral Palsy took her to the India Inclusion Summit, the annual disability gala in Bengaluru. For the first time she entered a thoroughly accessible venue and was thrilled with the wheelchair they provided. She connected with Shanti Raghavan, founder of Enable India, and opportunities began to open up.

Repeated rebuffs at job interviews had killed Srilatha’s spirit. She used to sit with a drooping head because she anticipated rejection. It was Shanti who urged her to start using a wheelchair and confidently confront interview panels. Srilatha began to hold her head high and wear a smile. She participated in Enable India’s CSR programmes. She got a lightweight wheelchair and in 2014 she and her friends formed The Invincibles. That same year she landed her dream job with a MNC and in 2018 moved to another MNC where she is currently employed.

Today Srilatha leads an independent life. She cooks simple, healthy food, vacuum-cleans her ground floor house and hires a domestic worker only to wash vessels. “I want to travel as much as possible,” she says. “And I want to be silent, allowing my actions to speak for me.”