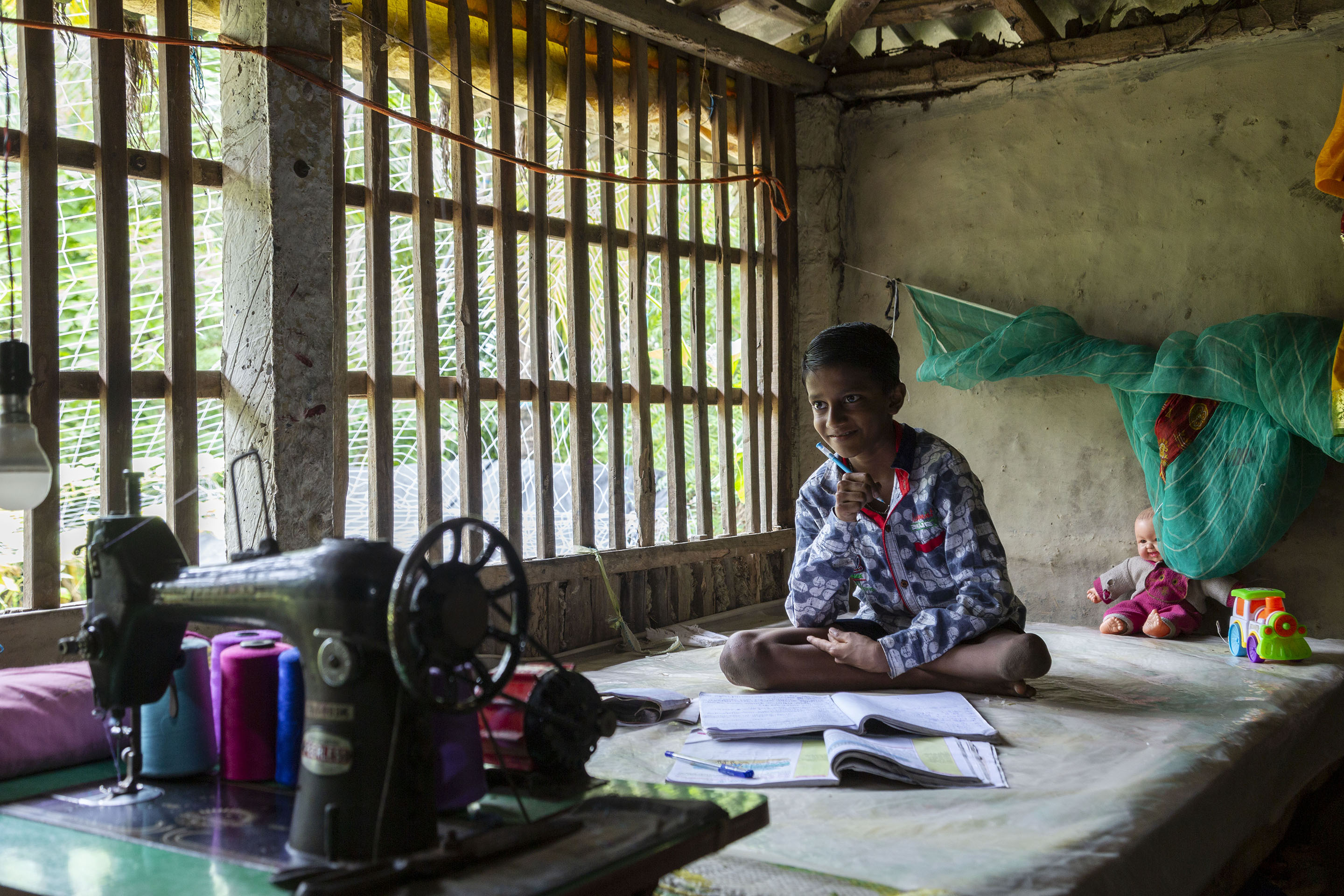 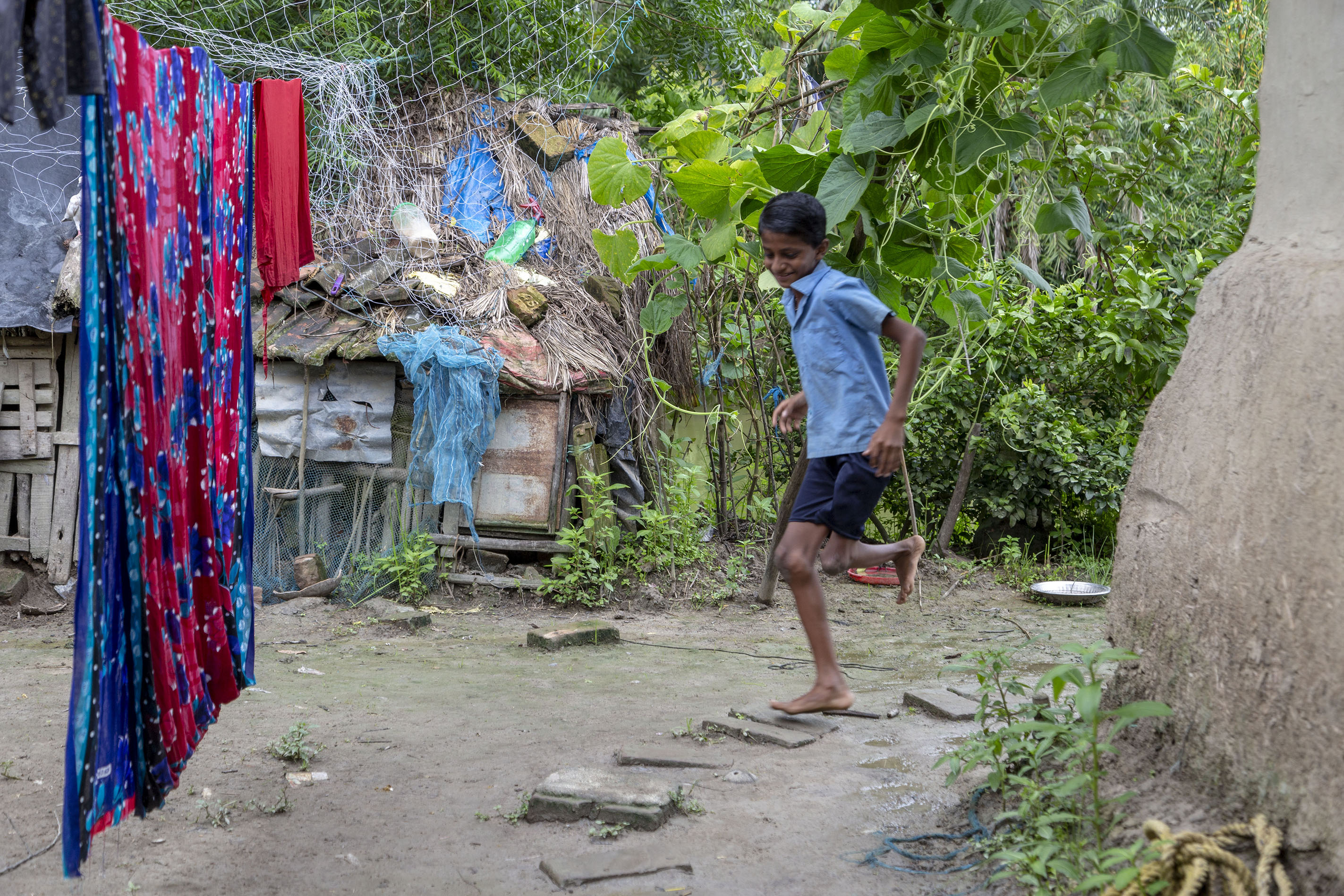 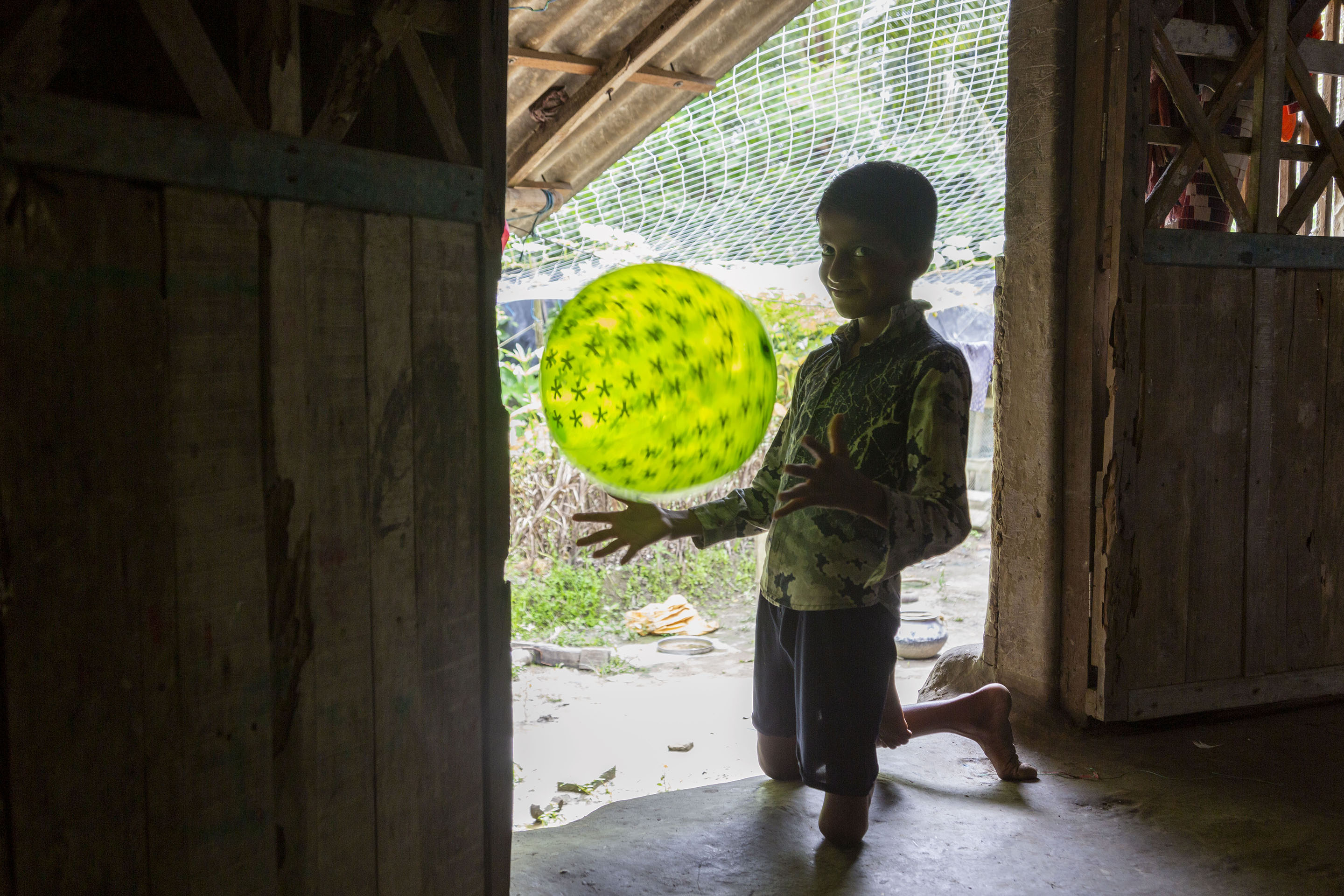 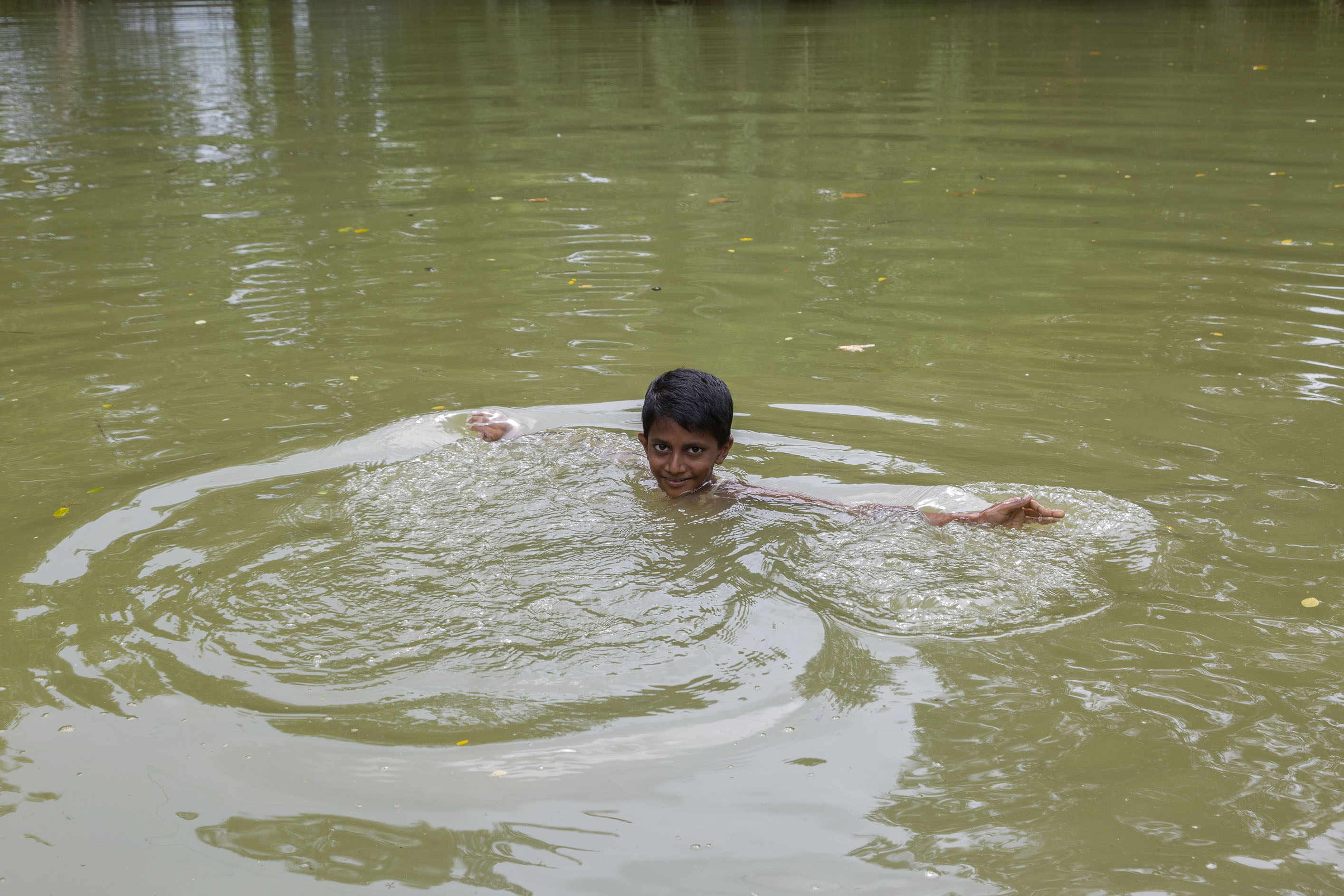 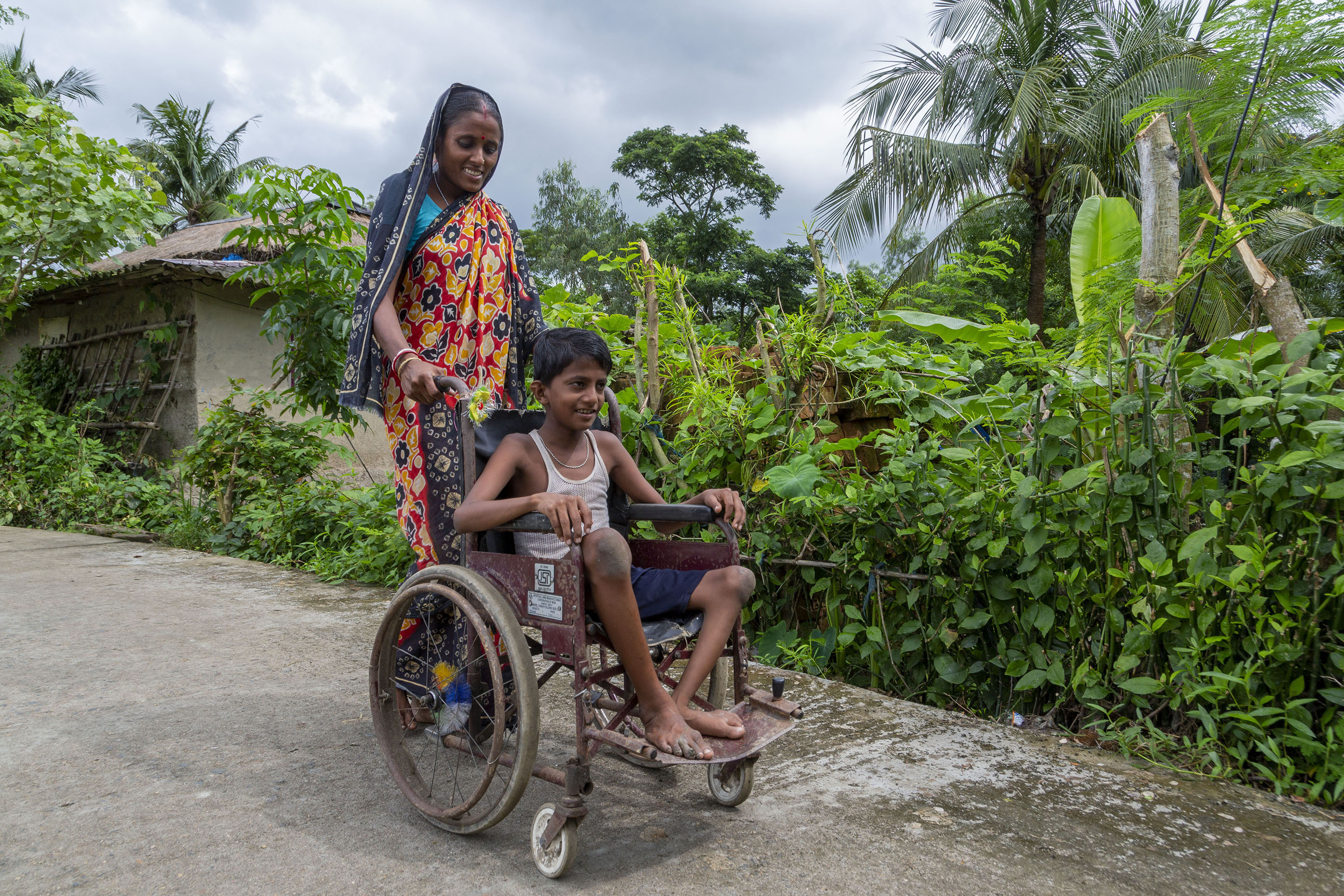 “I have many friends in school. I like reading Bengali storybooks”

Somnath Mondal has come home for the Durga Puja holidays. The 11-year-old whose parents live in Jharkhali village in South 24 Parganas, West Bengal is having a merry time swimming (their house has a pond), eating sweets, playing with his friends and going with them to group-watch TV in a neighbour’s house. But it is a brief visit. He lives with his uncle more than 100 km away in Bally village, where he studies in Class Six of Bali Purbapara Junior High School. He has to prepare for the exams coming up after the break.

Somnath, the only child of his parents Gourahari and Bandita Mondal, was born with a deformity in his left leg that prevented him from being able to walk like the average person. When he was around 18 months old his parents took him to a few hospitals in Kolkata but the doctors were not confident that corrective surgery would help. Gourahari wasn’t disheartened. On the contrary he was very clear about his next step. Being a farmer and part-time fisherman whose parents were too poor to educate him beyond Class Four, he set his mind on giving Somnath a good education so that he would be self-reliant in future.

When Somnath turned three, Gourahari sent him to his brother (now married with an infant son), who is a tailor living in Bally with their parents. There is not only a good school near their house but Bally also has better roads than Jharkhali, which eases Somnath’s mobility. His grandmother conveys him to and from school in his wheelchair. “Somnath always says that when he grows up he wants to do a job,” says Gourahari. “He doesn’t know what kind of job, though. No one in our family and none of our acquaintances are educated enough to guide him.” Perhaps Sunderban Foundation, which took photographer Vicky Roy to the Mondal home, might have some answers; the NGO works in the areas of community development, education and health care.

Meanwhile Somnath, a bit shy when he first starts talking to us, quickly reveals his usual cheerful nature. In school he has a lot of friends who include him in all their games. He likes to read storybooks in Bengali. When he comes home during school holidays he enjoys the non-veg food his mother cooks. And he is not too old for playthings, apparently, since he says he likes toy cars!

Gourahari says that the government’s monthly disability allowance of Rs 1,000 only partially meets Somnath’s schooling expenses, but he is bent upon continuing his son’s education despite his financial struggle. “Education is all the more important for him because of his disability,” says Gourahari. “He should be self-sufficient and not rely on anyone.”