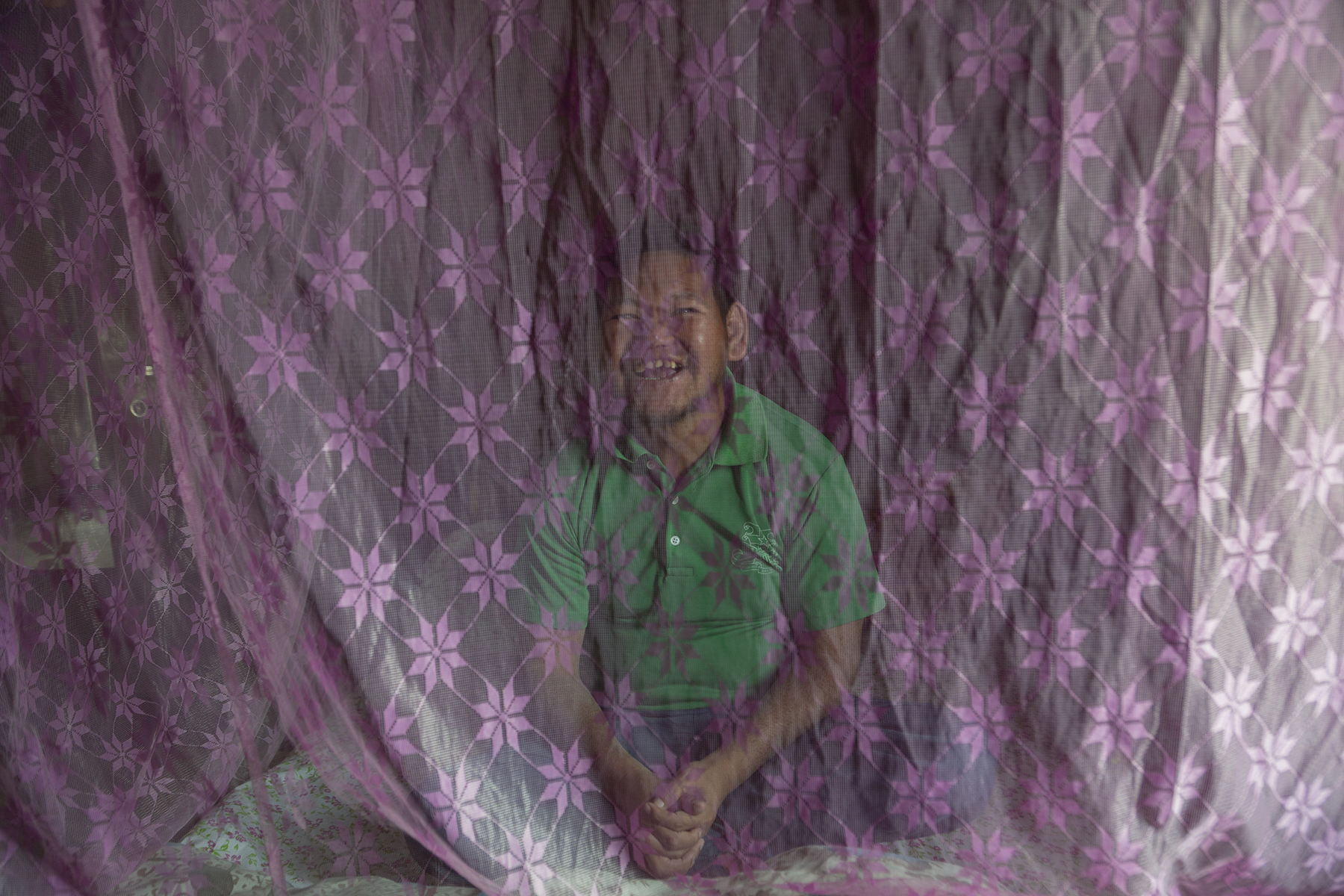 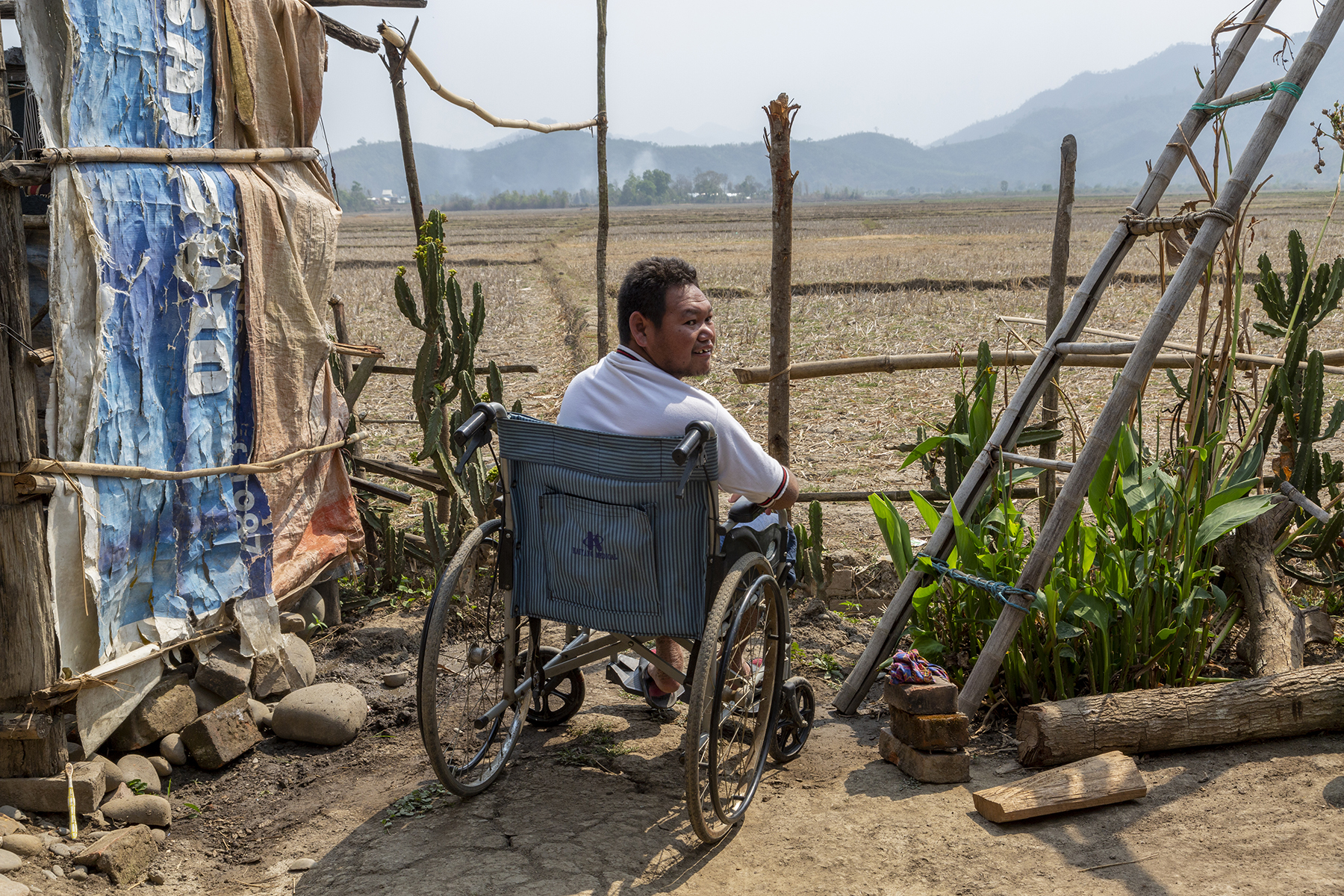 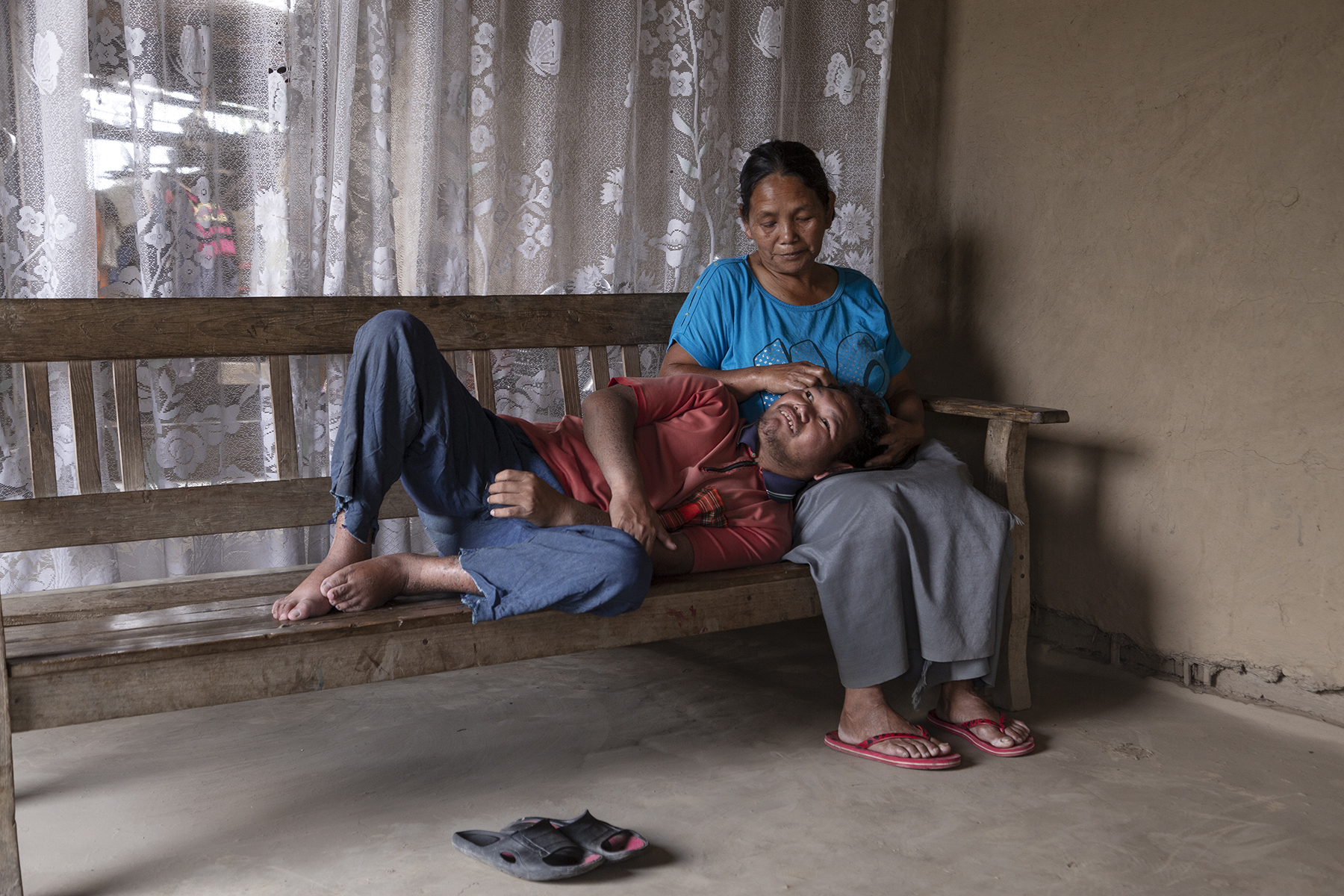 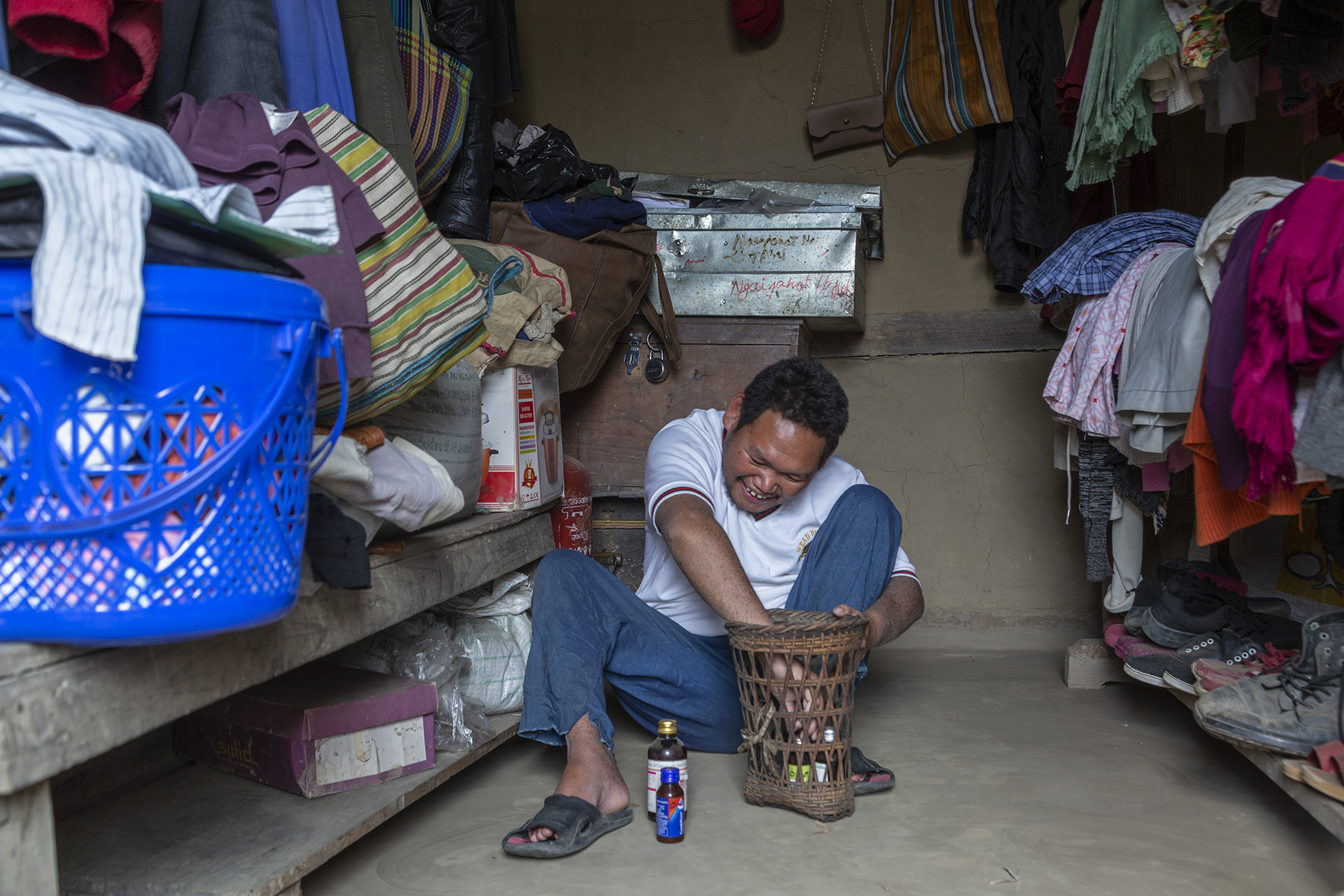 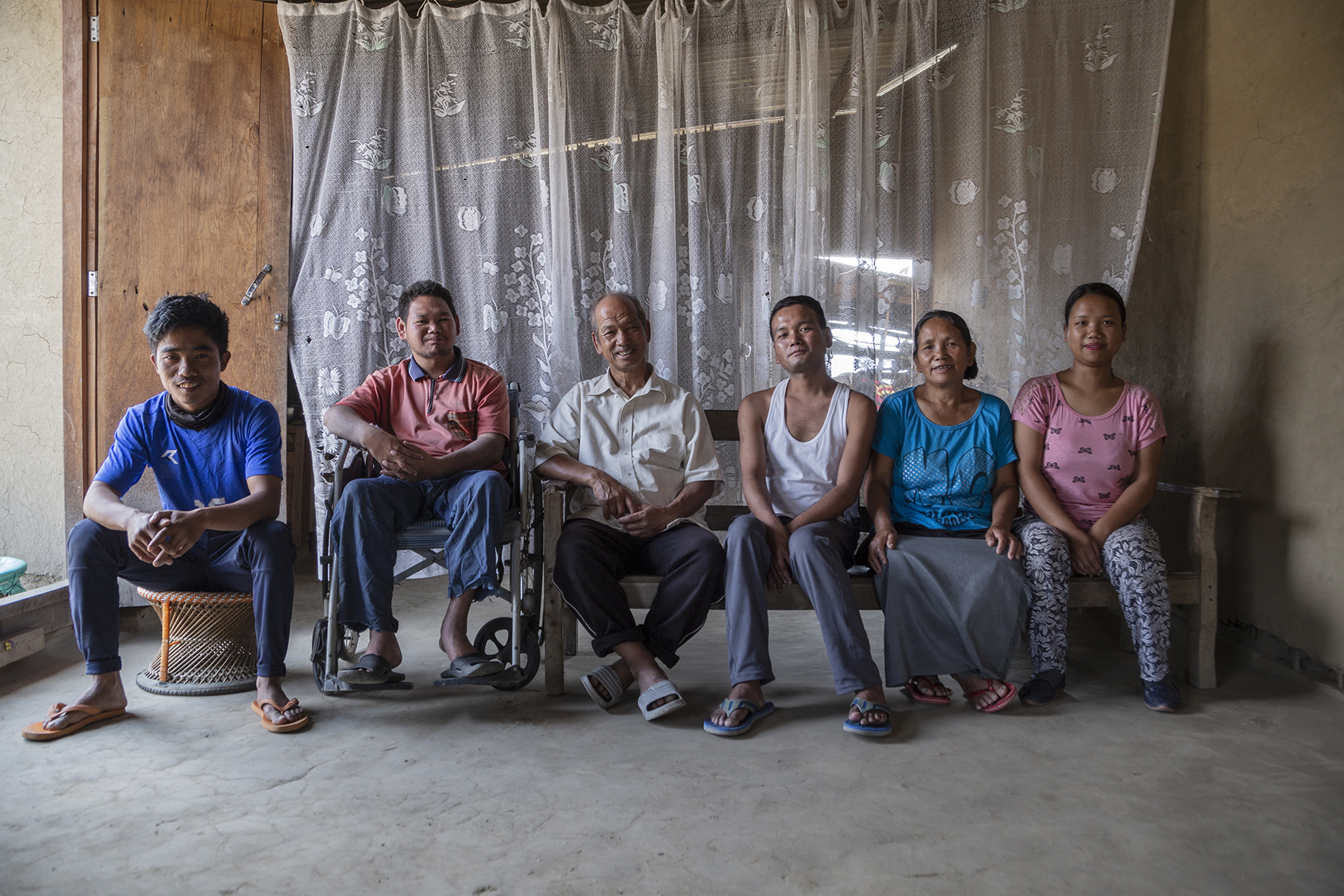 “I enjoy meeting people and getting toys for Christmas”

Sohkhotinlen Haokip (31) enjoys being around people. When he crawls down the streets of Y. Thingkangphai in Chandel district, Manipur the villagers tease him, “Hey Sohkho, who’s your girlfriend?” He doesn’t understand that they are mocking him, for he has Down Syndrome (DS) and “severe mental retardation” with “90% disability” according to his official certificate. He laughs along with them, visibly shy and excited.

Sohkho’s speech is restricted to a scattering of words such as water, cow, cat, church. He has never been able to take care of himself; his mother and older brother still feed and bathe him and manage his toilet needs. We gathered his personal details through Lunhaolal Kuki, a research associate at Shishu Sarothi whose parents are neighbours of the Haokips. Lun interpreted for the Haokip couple, who only speak Thadou Kuki; he has also closely observed Sohkho.

The Haokips, who belong to the Kuki tribe, moved to Y. Thingkangphai  in 2018. The local tribal chieftain allotted them a plot of land which they are allowed to live on and till. Helkhothang and Dimkhoneng Haokip, both 64, grow paddy and also benefit from the government’s MNREGA social security scheme; in the off season Mr Haokip earns Rs 500 as a part-time pastor. Centre for Community Initiative (CCI) drove our team 70 km to this remote village.

It is tempting to imagine Sohkho in a different environment. A Sohkho who got the right diagnosis and the right resources at the right time. DS can be detected in infancy but only in a well-equipped hospital, which Sohkho’s birthplace could only dream of. After the age of five he could no longer walk. Was this a result of DS or some other medical condition? Years later someone donated a self-propelled wheelchair, impossible to use on uneven, kachcha village roads, so he moves on all fours.

There was no NGO in his district, no special school, nowhere he could receive occupational therapy and skill training for a suitable job. He was sent to a boarding school — Mangwa School for Handicapped in Kangpokpi district — where he stayed for only two years because “he fell ill, and we had financial problems”, said his father.

Sohkho, cocooned in his family’s love, watches cartoons on TV in others’ homes and goes to church twice a year: for Christmas and New Year. He likes getting toys that some church-goers gift him on Christmas. But what goes on in Sohkho’s mind? What makes him happy, sorrowful, angry or fearful? We may never know.