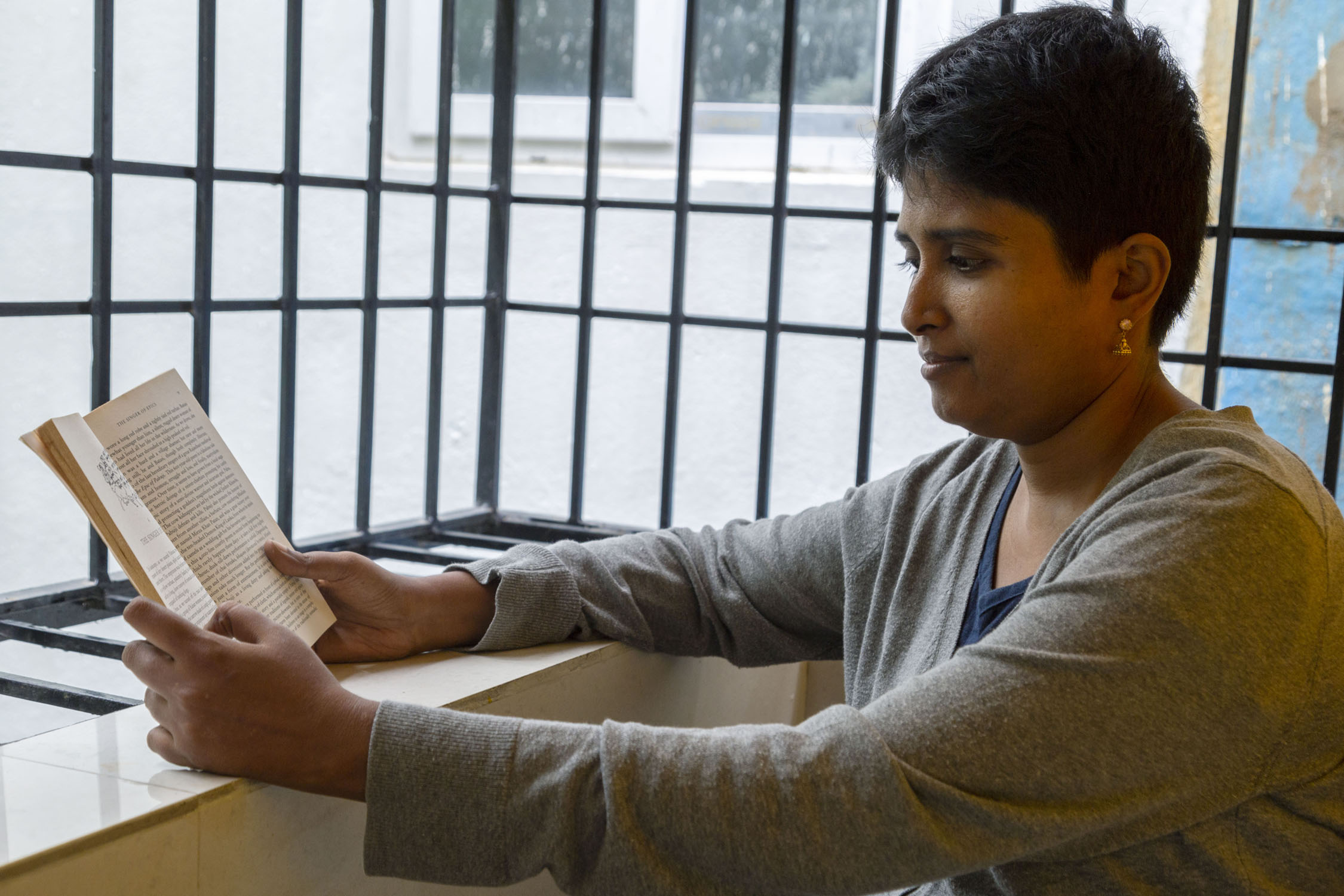 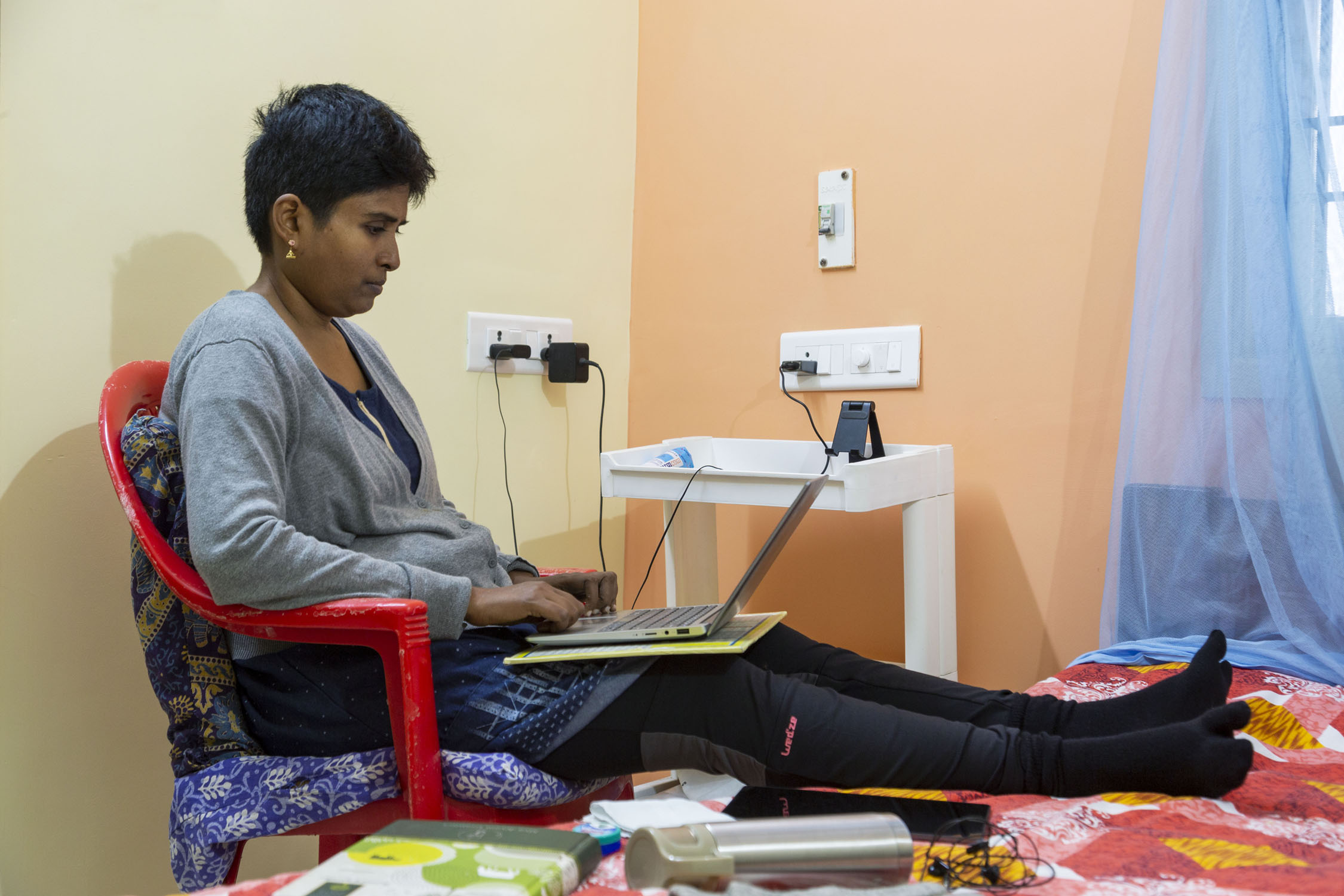 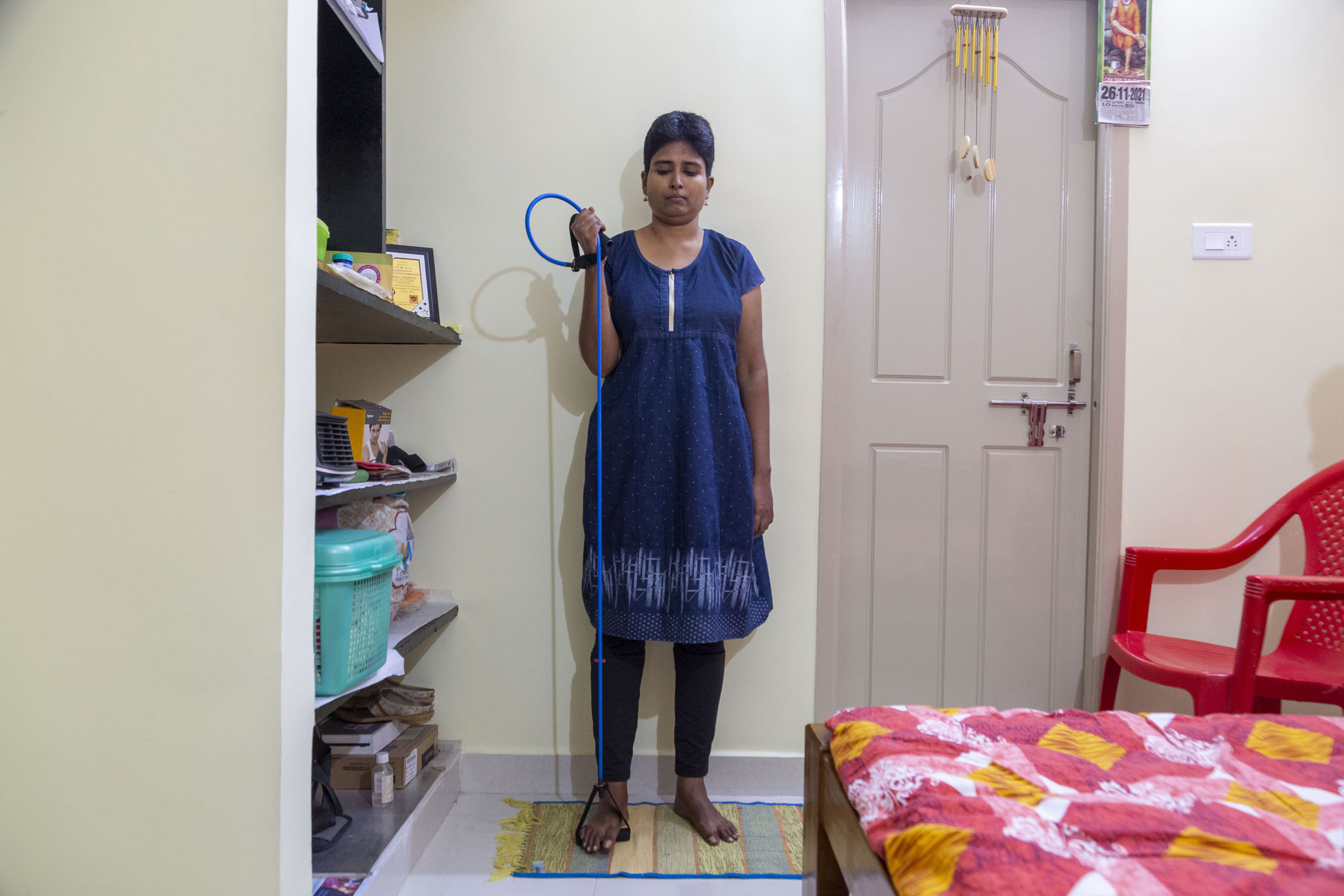 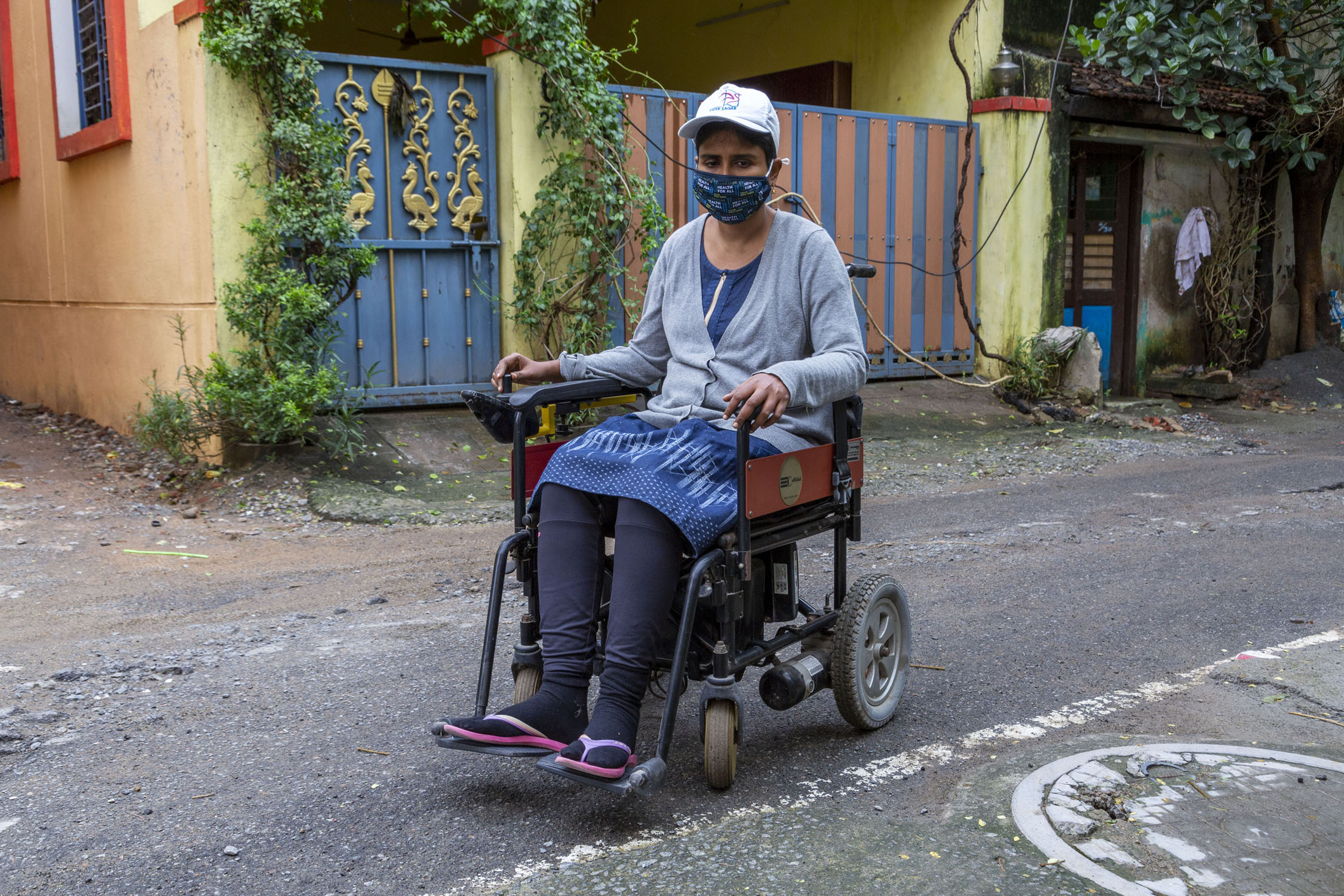 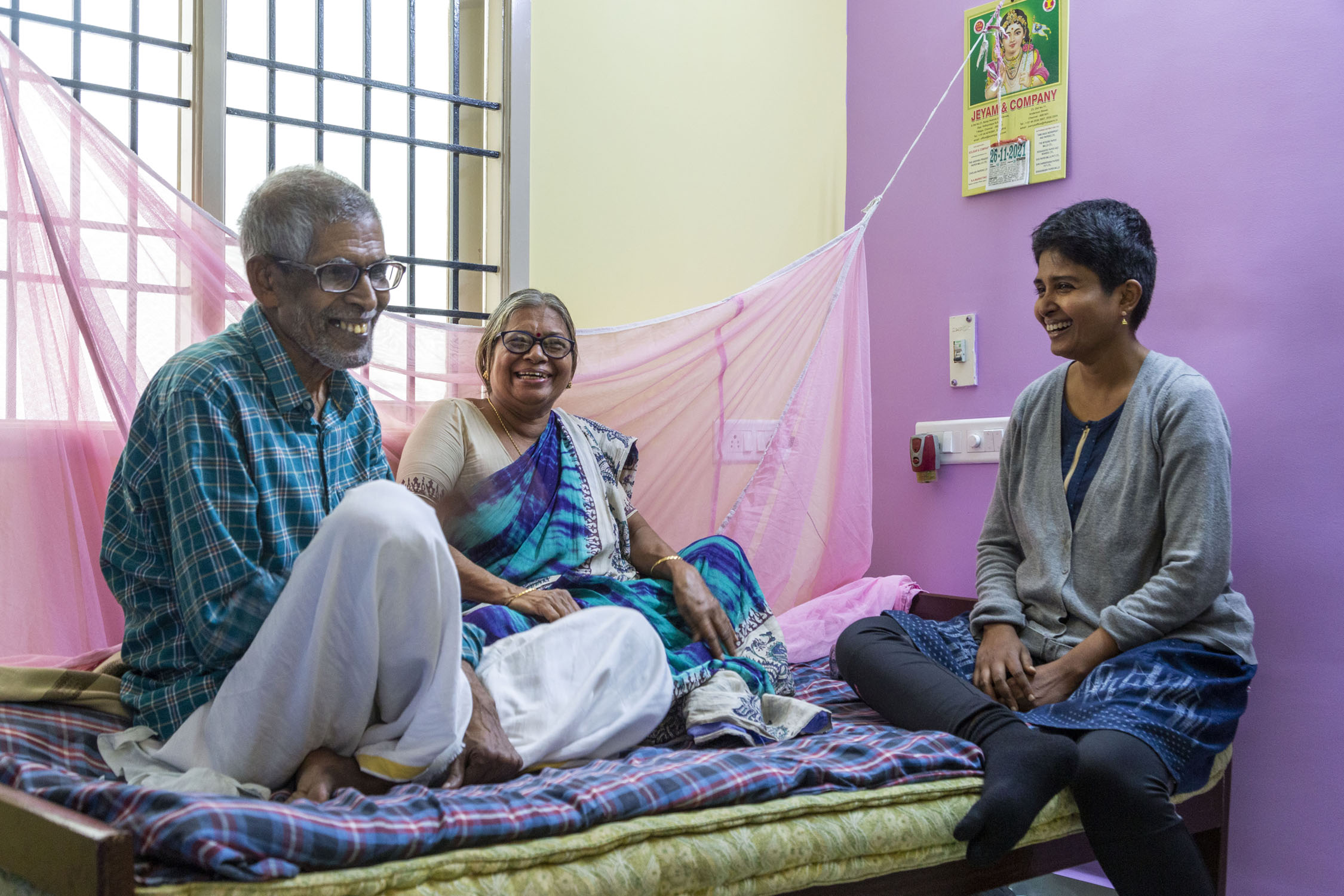 “After we benefit from support systems, we should also become a support for others”

The average person frolicking on a beach may never stop to consider the question: can a wheelchair user reach this spot where I stand with the waves lapping against my feet? The tyres of an ordinary wheelchair will not move through dry, loose sand. Imagine how many people who live by the sea have never touched its waters or felt its salt spray on their faces!

A floating wheelchair with balloon tyres that can navigate dry sand is the simple answer. And since everyone cannot afford one, why not have a pathway leading to the water? Since 2016, Smitha Sadasivan (42) has been working with the Greater Chennai Corporation (GCC) to provide a permanent wheelchair-accessible pathway from the service road to the coastline of Marina Beach. GCC responded by creating a temporary pathway every year for a week around December-January (3 December being the International Day of Persons with Disabilities). It has even provided a few floating wheelchairs, but environmental clearance for a permanent pathway has taken time. The clearance has finally come through and the GCC Commissioner has stated that a permanent pathway would be ready in about three months.

Smitha’s impressive credentials – as a disability rights advocate, accessibility consultant, access auditor, trainer and much more – are a direct result of the disability she acquired at age 19. She was diagnosed with Multiple Sclerosis, which is a degenerative disorder of the central nervous system and is considered an autoimmune disease.

Smitha is the only child of N.K Sadasivan (79), who was a clerk in a private company, and Santha Kumari Sadasivan (68), who temporarily worked at the Directorate of Public Instructions and was then self-employed. She was doing her B.A. in English Literature in Queen Mary’s College where she was a livewire – a popular, academically bright student and a member of the students’ union who engaged in various co-curricular activities including karate. In the third year of her degree course she started experiencing fatigue, body pain and uncoordinated movements. Her supportive professors made allowances for the fact that she couldn’t sit for long. She had to take just one hour of class a day for them to mark her attendance, and they gave her a day’s break between one exam and the next. When her fingers lost dexterity they arranged for a separate room where she could lie down and dictate to a scribe. She finally graduated in 2003 and went on to do her Masters and M. Phil in Psychology.

A cocktail of medications, each with side effects on different organs, became part of her life. Pain and fatigue were constant companions that were soon accosted by a familiar fellow-traveller: depression. Meditation, alternative therapies, and a healthy Ayurveda-based diet were alleviating factors. To tackle her seesawing health and occasional relapses (after some of which she had to start from scratch), to accept her condition with equanimity – this was no small feat. She says that one can’t predict how much time will pass between illness and healing. “In that time, do what you can do, and would like to do. If you can’t do anything at all, that’s okay too.”

And to say that Smitha has done a lot would be the understatement of the year! In 2003, acting on a professor’s suggestion, she sought a job at the resource centre for persons with disabilities, Vidya Sagar. The then-director Poonam Natarajan was keen to hire her, placed her in their disability legislation unit, and provided her all the support she needed. She used to travel nearly 7 km by auto to her workplace, and found it exhausting. Therefore, two years later, she moved to a place half a kilometre away which meant she could easily travel to work on her motorised wheelchair.

Smitha threw herself into her job at Vidya Sagar. She was coordinator of the disability legislation unit till 2017, and she is now a member of their independent living project, Trust Enabled Decisions and Support Systems. Over the past 19 years she has expanded her horizons and worked in diverse areas of disability. Besides being a member of the Chennai chapter of the Multiple Sclerosis Society of India (MSSI), an organisation that has been a huge source of support for her over the years, she is an accessibility consultant for the Election Commission of India, a member of the Disability Rights Alliance, Tamil Nadu and an advisory group member for Civil Society Engagement Mechanism for Universal Health Coverage 2030 under the United Nations. As a trainer she has conducted numerous workshops and made trips abroad as well.

Accessibility and inclusion are the main planks of Smitha’s activism, and what she hopes our country will embrace. On the personal side she is concerned about the health issues that her ageing parents are facing. She says that they have taken care of her all this time, and now it is her turn to try and get them the best possible affordable healthcare. No doubt she will handle this with her usual aplomb, continuing to maintain her attitude of “Just flow with life.”