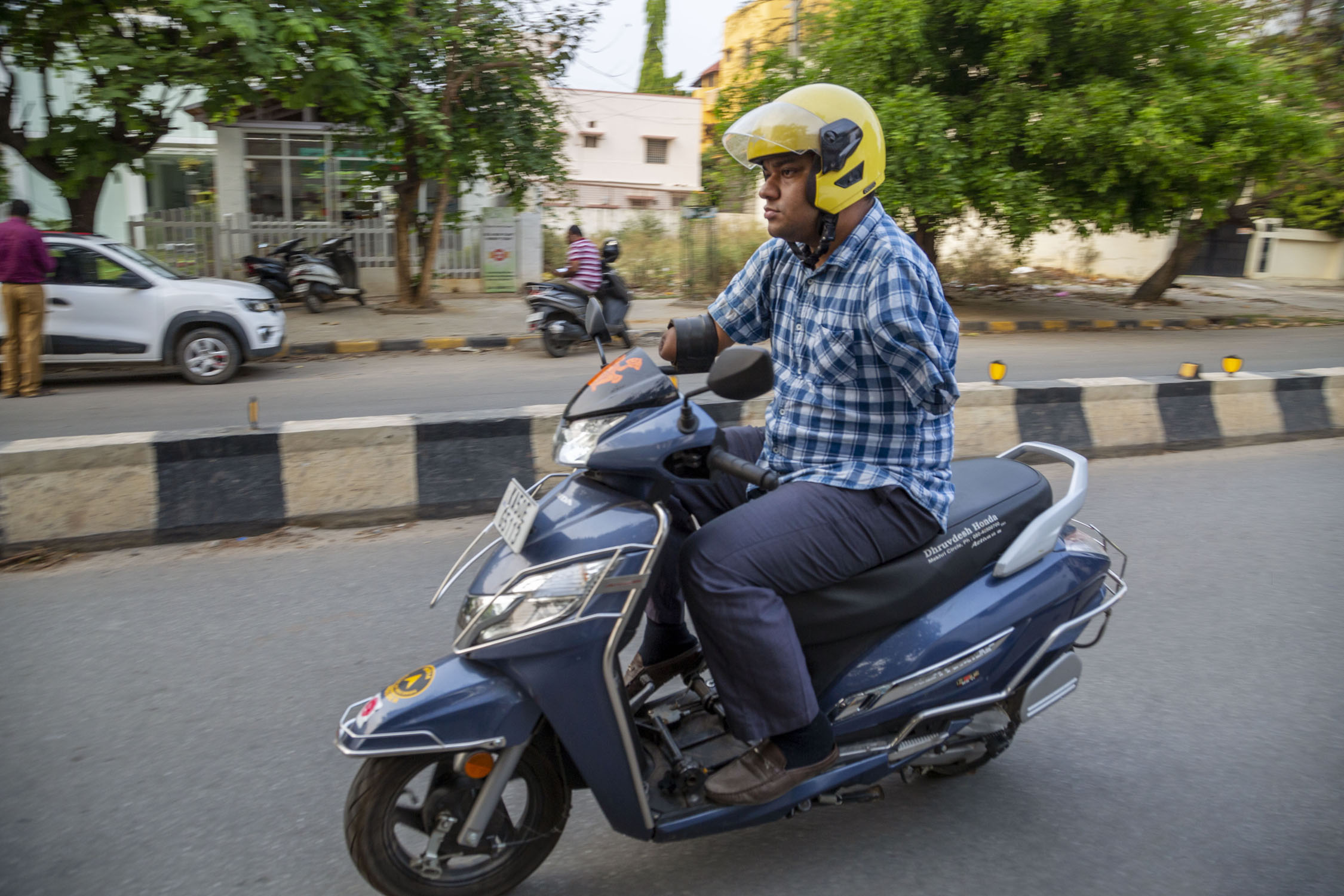 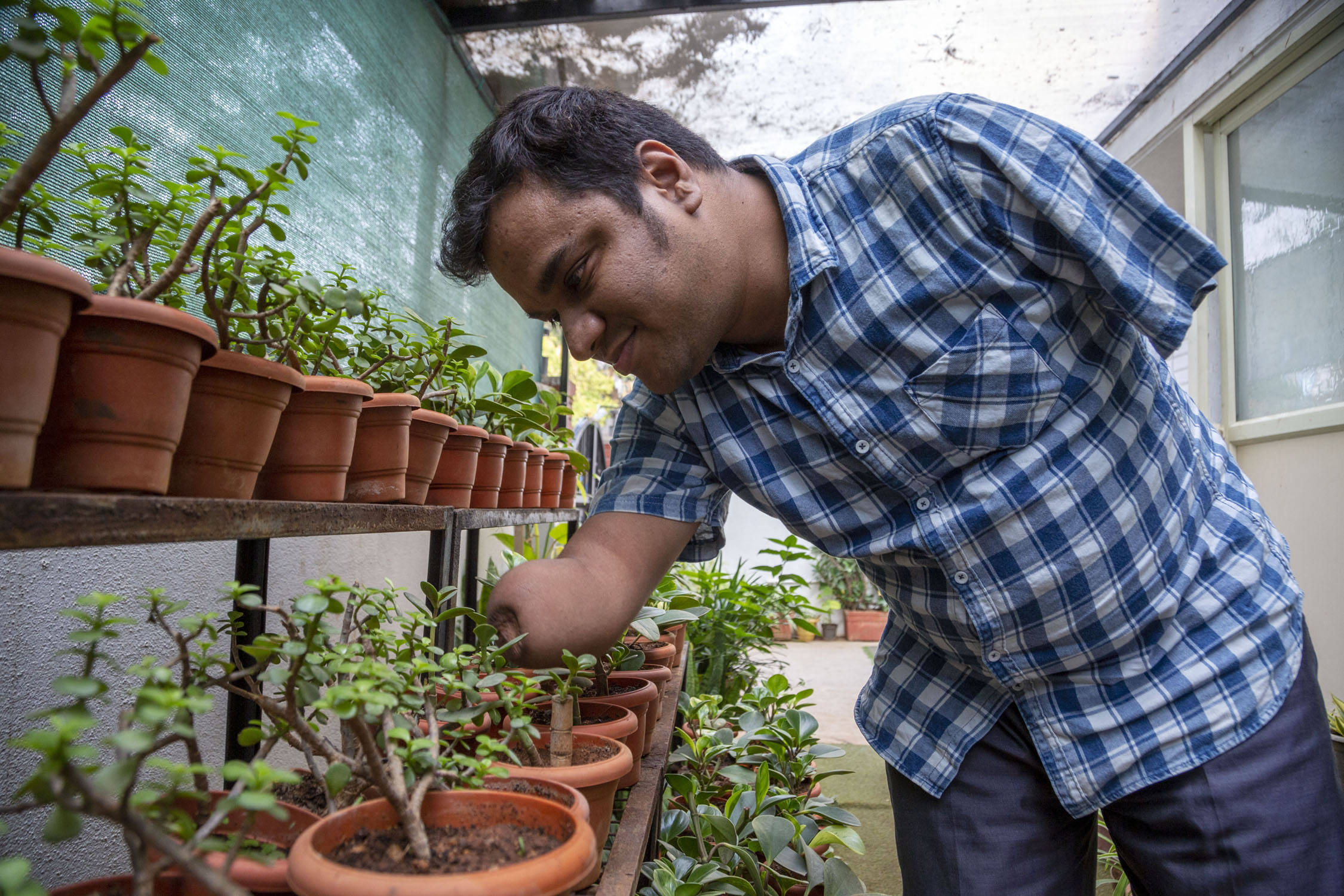 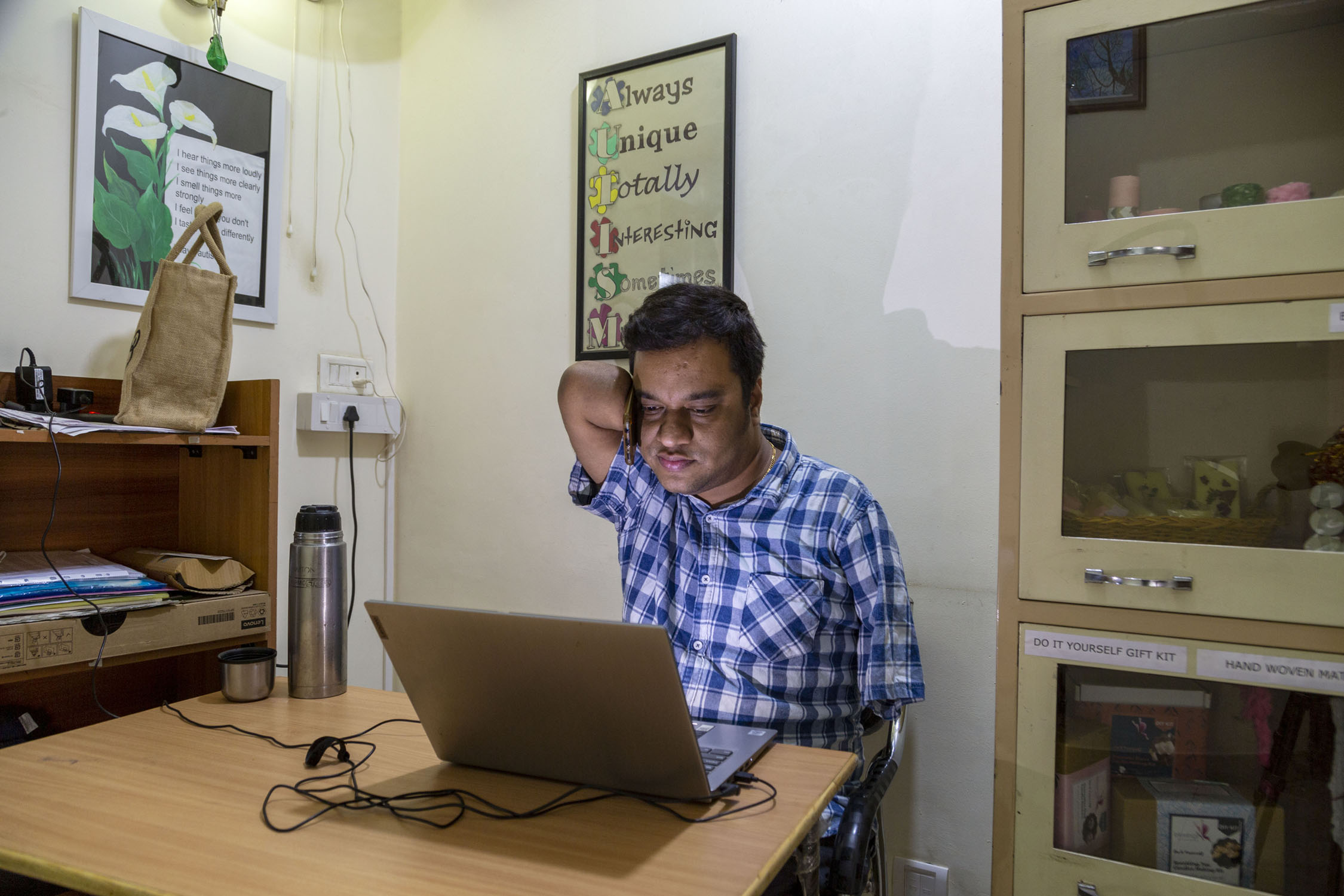 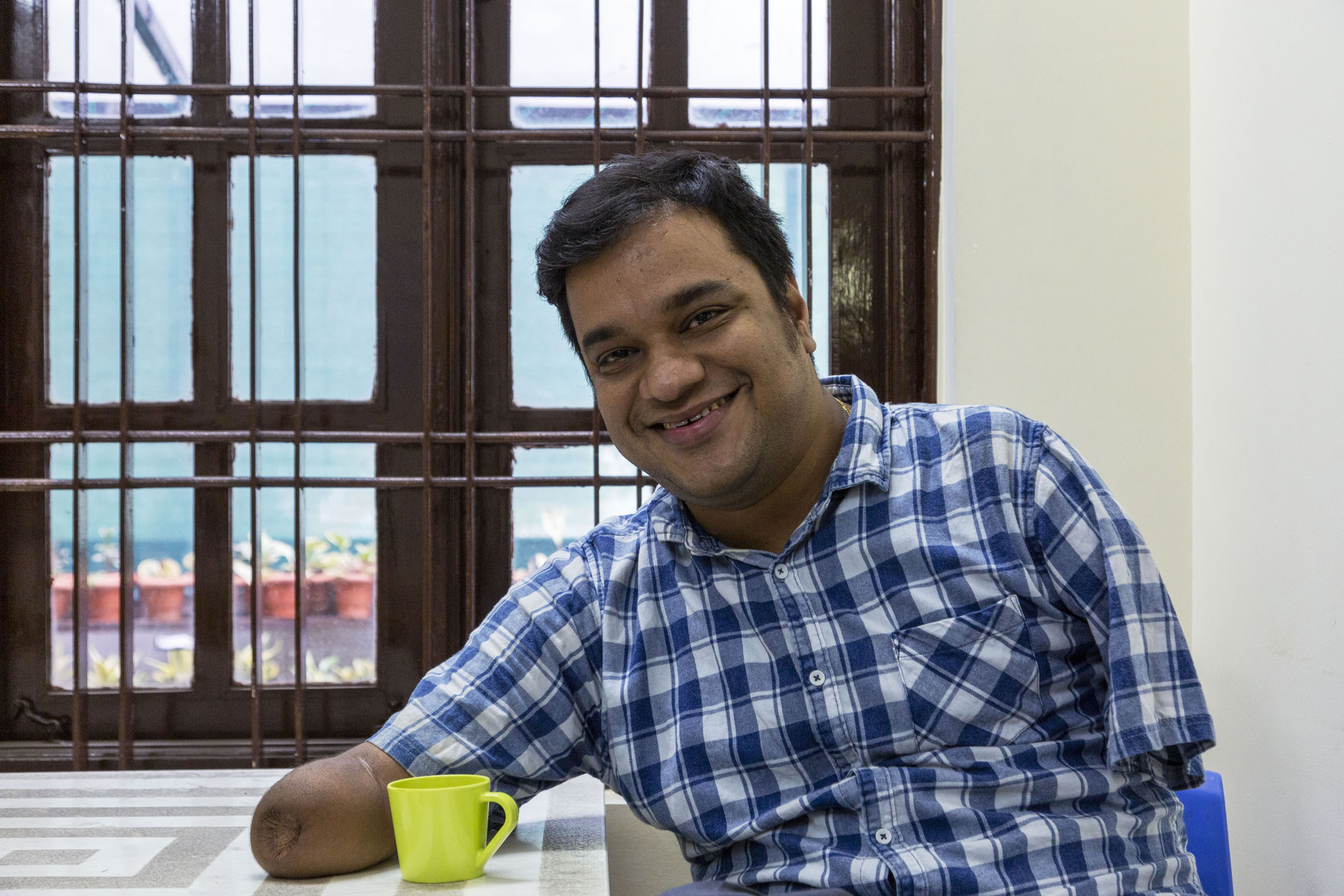 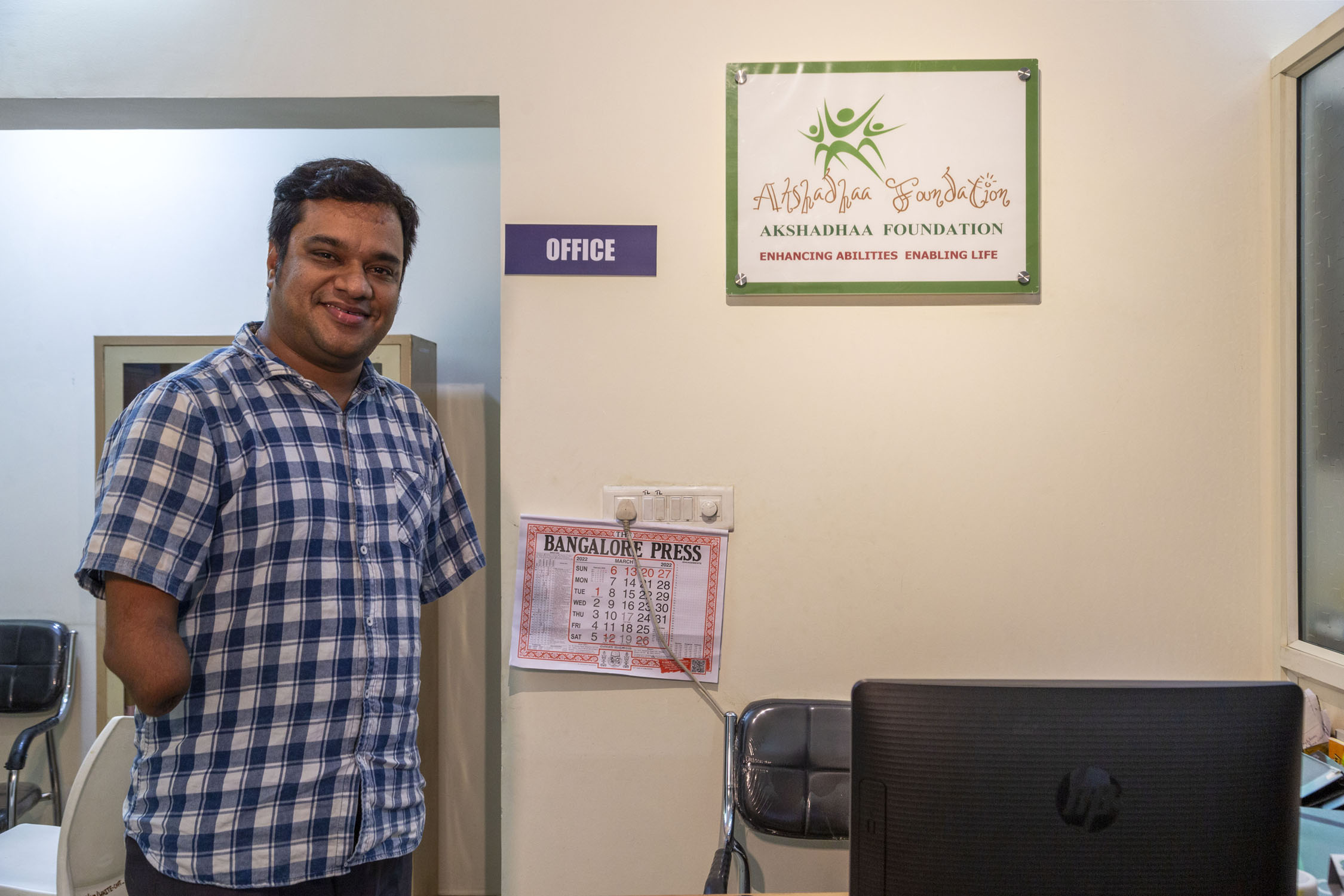 “Society thinks that disabled persons only ask for help. I want to convey that we can offer help too”

Shubhajit Bhattacharya (34) was 11 when he travelled from North 24 Parganas, West Bengal with his mother Shibani to his sister’s house in Bangalore. Shibani intended to help her daughter through her difficult pregnancy and post-delivery issues. One day Shubhajit was playing on the terrace with his pet dog Kishmish. A nearby coconut palm attracted his attention. He prodded a coconut with an iron rod, which touched a high tension wire. He was struck down unconscious. A boy next door saw the accident and rushed to tell Shibani. Although she didn’t understand Kannada she had a sense of foreboding. She went to the terrace to find Kishmish sitting beside Shubhajit.

Shubhajit regained his senses after 48 hours in hospital but remained there for 10 months after both hands were amputated. “This happened in May 2000. It was my second birth,” he says. Shibani instilled in him an iron resolve to confront the future. He narrates how psychiatrist Dr Meera Chandy asked him, “Do you feel life is worthless? Do you think that you have lost everything because you lost your hands?” He replied, “No, I thank god that both eyes are saved so I can see this beautiful world.” On hearing this Dr Chandy told Shibani she needn’t worry about his mental health. Shubhajit also affectionately remembers a frequent bedside visitor, retired HAL engineer Mr Ramaswamy, who gave him a Walkman, music cassettes and batteries to keep him in good spirits. Inspired by Rajesh Khanna in the movie “Anand”, he had become a volunteer hospital counsellor.

In 2002 Shubhajit returned home with his mother. He maintained his positivity. “Whenever someone tells me ‘no’ it further motivates me!” he says. On the first day that he rejoined his friends to play football, he fell down and fainted. Despite their warnings, the next day he was back amidst them. Football immensely improved his balance and later he even got invitations from soccer clubs.

However, he could rejoin school only after years of recuperation. He was ineligible to write the board exams in 2010 for lack of attendance because the education board hadn’t accounted for his disability. Through Rabindra Open University he wrote his exams in 2011, pointedly using a prosthetic hand instead of asking for a scribe. The achievement gave him a sense of pride and he did the same for his twelfth standard exam.

In 2013 Shubhajit decided to get a bicycle modified for his use. Each cycle shop owner who told him “no” increased his determination. He finally found an accomplice and guided him to work on his father’s old cycle to create a prototype within just seven days! He completed a one-year diploma in computers and a two-month data entry program. In 2014 he joined Gobardanga Hindu College where he met his future wife Juli Aich. He quit in 2015 to seek a job in Bengaluru because “I wanted to earn and gain from the same city where I underwent a loss”.

The couple moved cities. Juli worked in an ayurvedic clinic and Shubhajit, in the Association of People with Disability (APD) as a graphic designer. The crowded bus ride to office was so nerve-wracking that he adjusted his schedule to avoid peak hours. Then he thought: since I can cycle, why not ride a scooter?

Shubhajit unsuccessfully searched online and wrote to two-wheeler manufacturers. He then bought a secondhand moped and he found a mechanic with whom he worked daily after office hours till 8 p.m. They created a prototype in a month and he practised on it for another month before buying a scooter and modifying it.

When he went to the Regional Transport Office for a licence the Assistant RTO assured him that although the law forbade armless riders, no cop would book him. Sure enough, Shubhajit has been freely riding since 2017 and is often met by curious, appreciative traffic cops when he stops at signals. In 2020, when he graduated through Indira Gandhi National Open University (IGNOU), he also received an IGNOU Innovation Award for his scooter design!

Shubhajit has garnered other accolades such as three Performance awards from APD and a mention in the India Book of Records but the Corona Warrior award is perhaps closest to his heart. When the pandemic struck, he and Juli pitched in to help suffering migrants during the lockdown, and got friends to contribute too. He rounded up volunteers and worked tirelessly from 6 a.m. to 9 p.m. distributing food to hundreds of families.

In April 2021 Shubhajit joined Akshadhaa Foundation’s school for children with autism and special needs as programme manager. A certified counsellor from Banjara Academy, he works with teenagers and senior citizens; Kishore Kumar songs perk him up when their painful stories get him down. Nature is another healer: he enjoys working in the school garden and taking long rides to green spots.

Shubhajit’s dream project is to travel 3,000 km by road from Delhi to Ladakh in 21 days, to spread the disability message: “Never give up. Take control of your own life.”