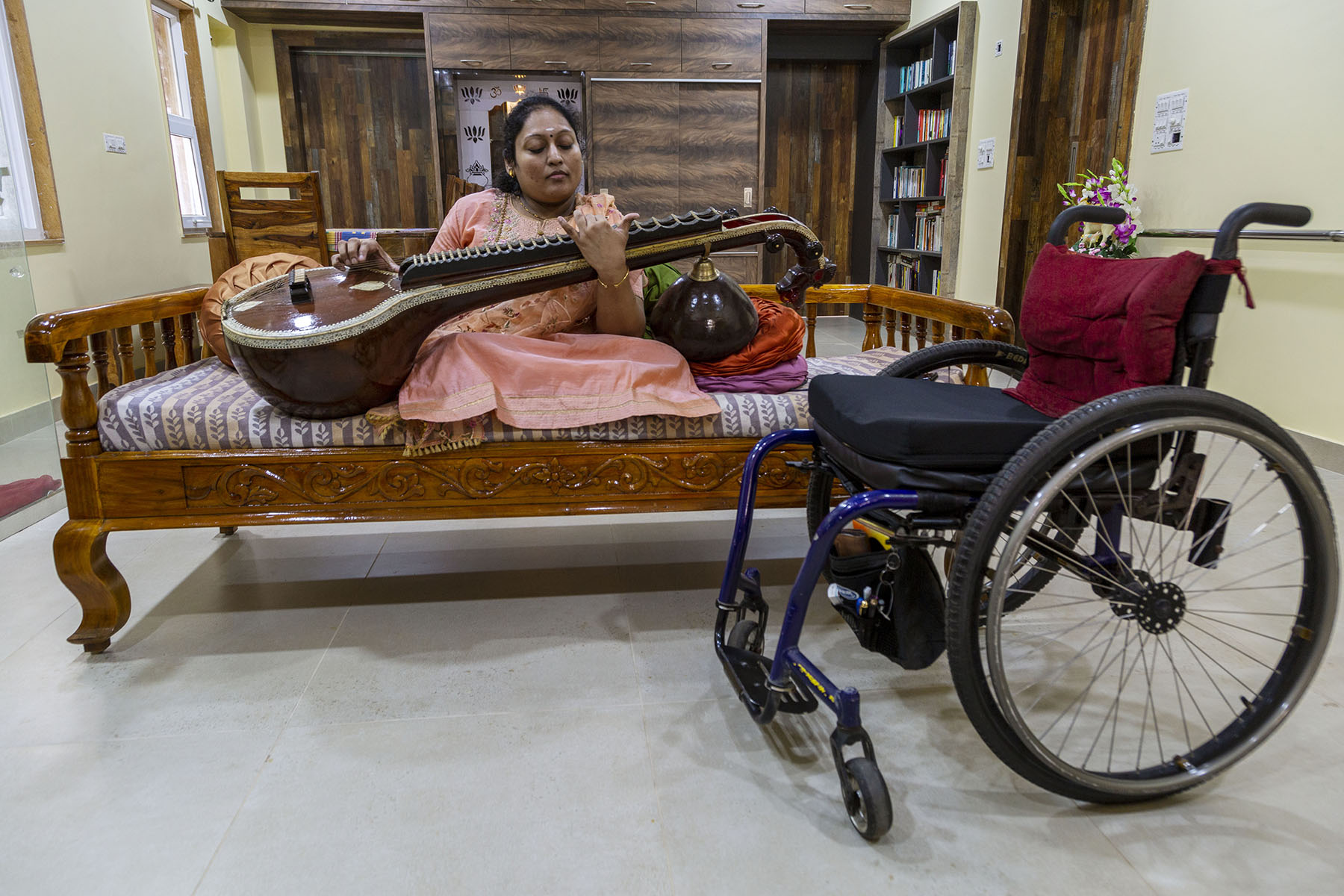 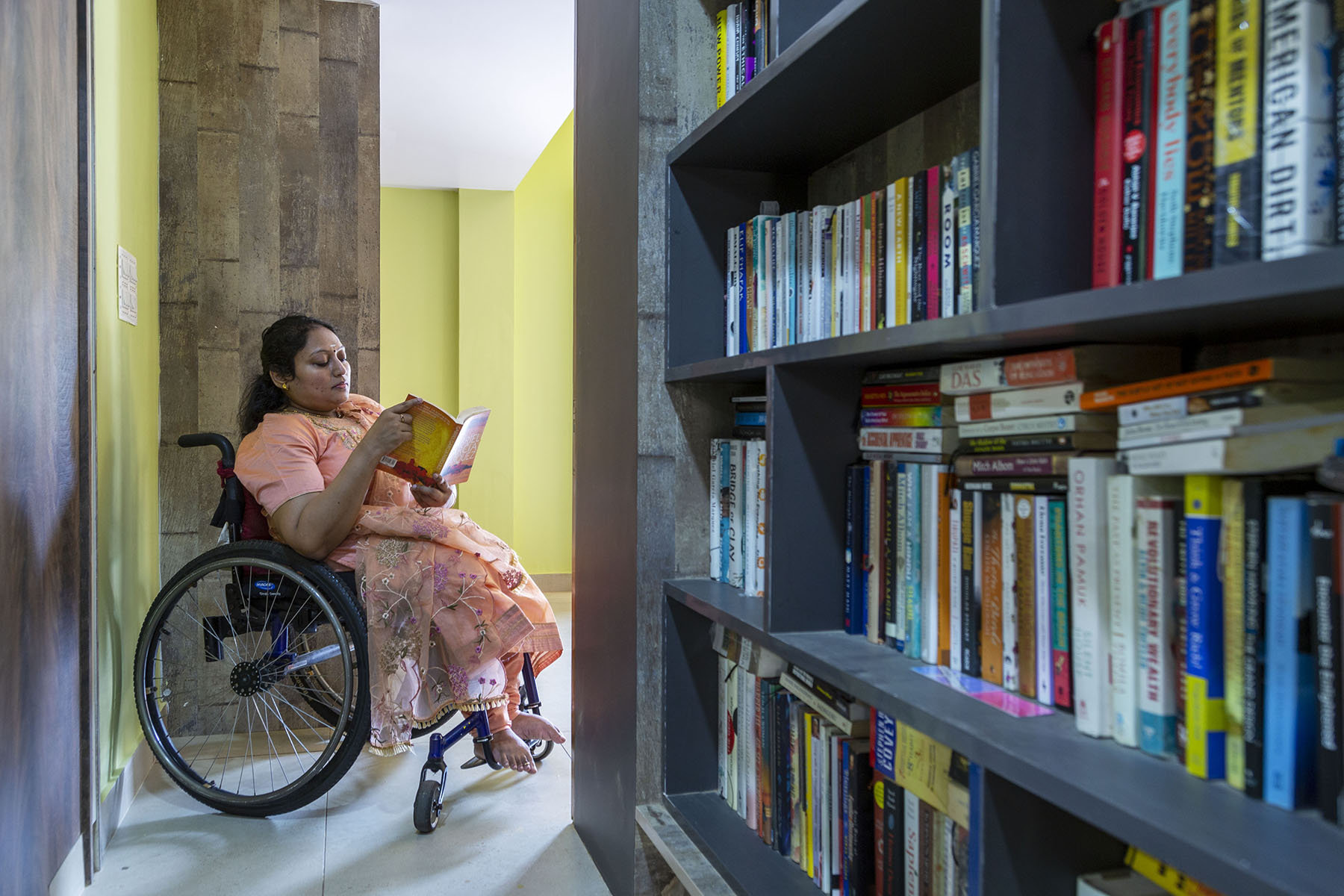 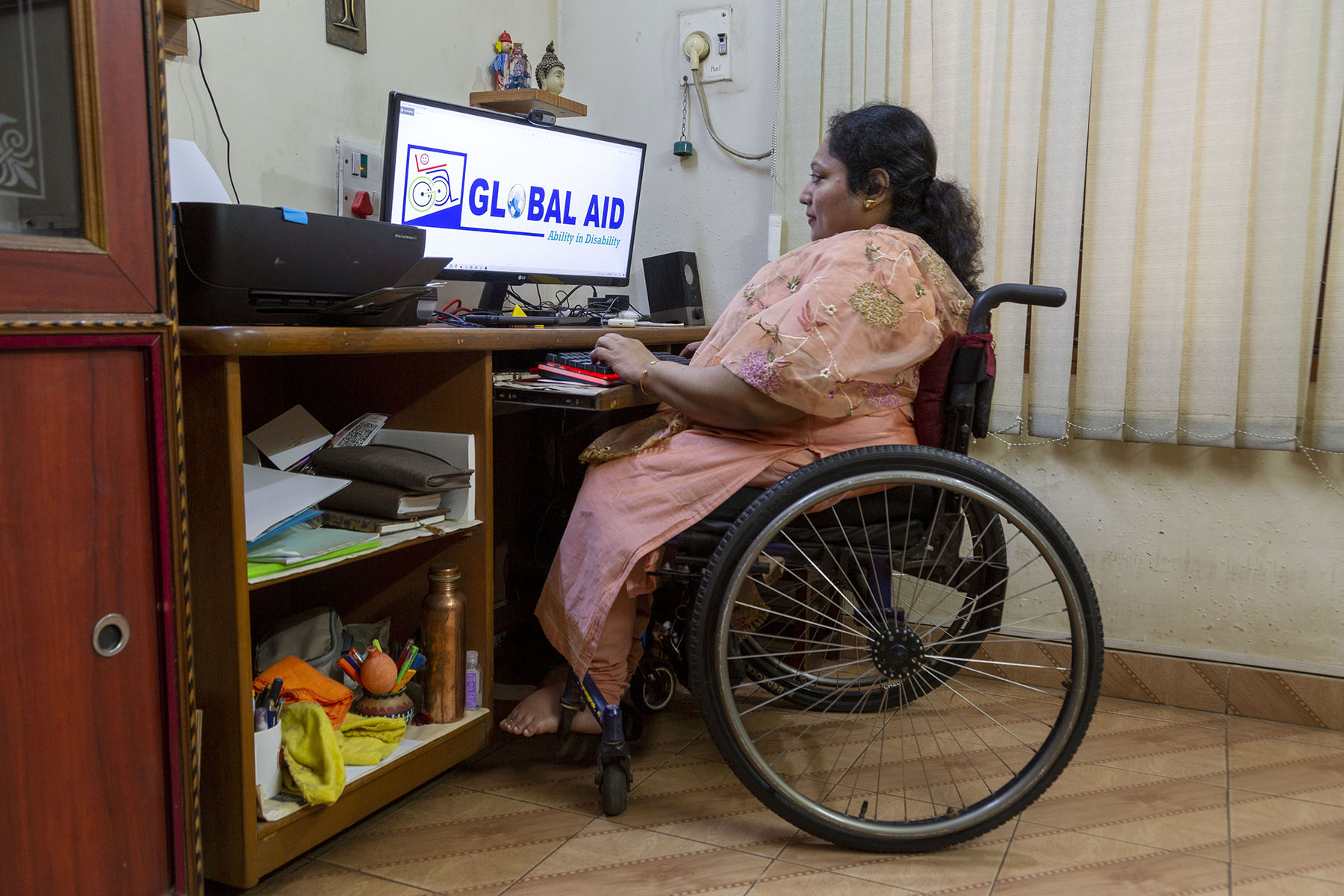 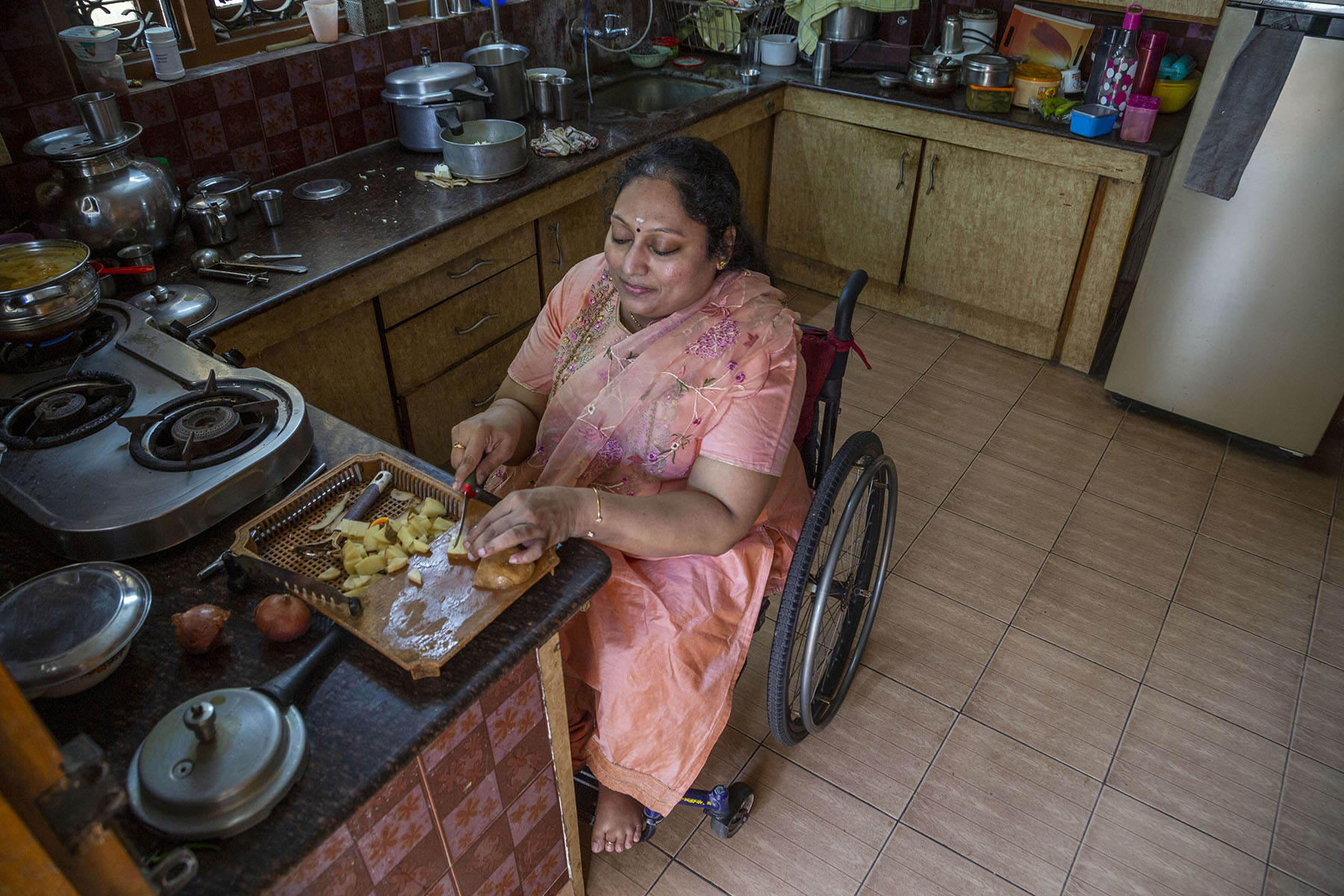 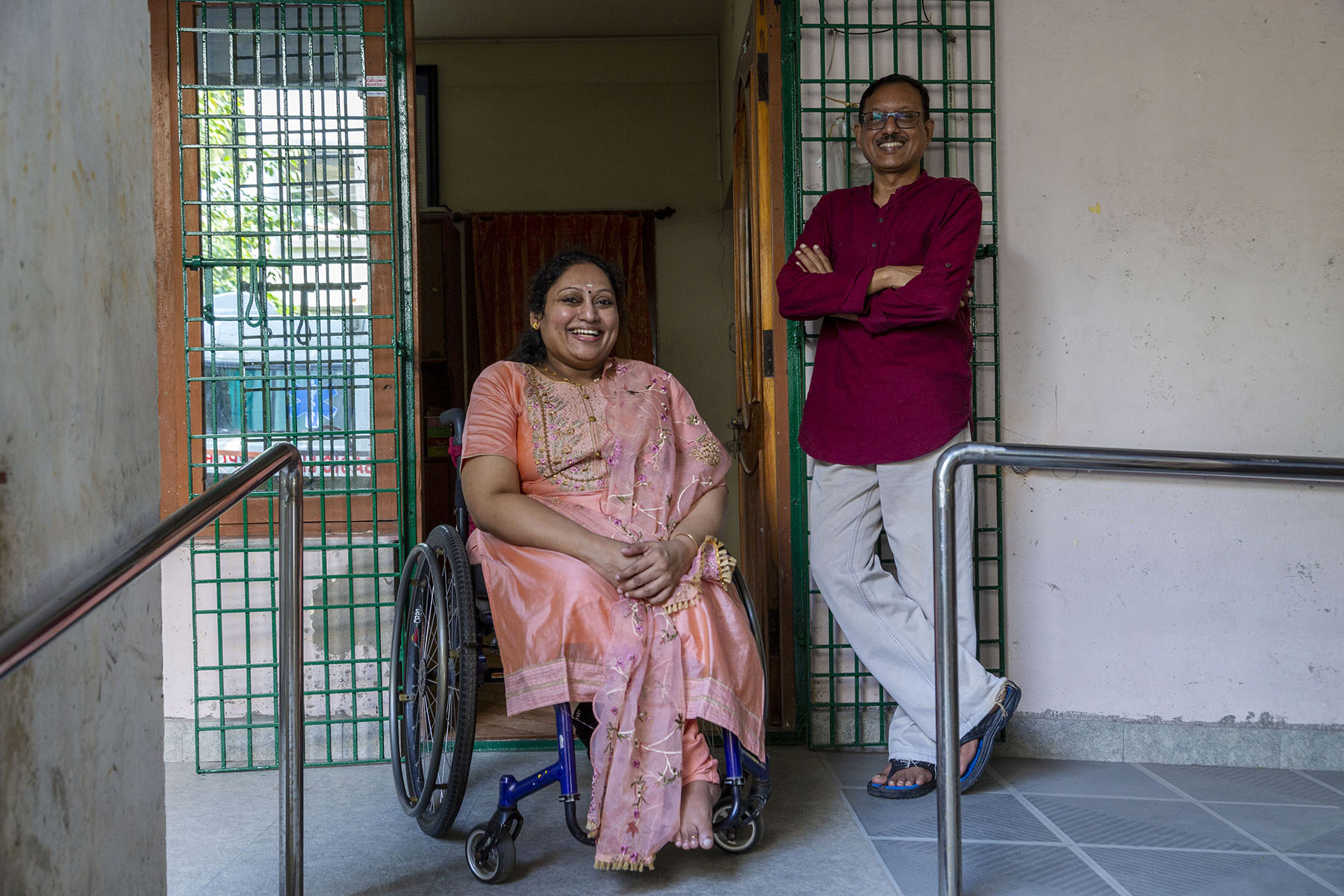 “Being ‘stuck’ in a wheelchair isn’t as bad as being stuck in your mind, in your life”

Sai Padma from Andhra Pradesh is virtually flooded by doctors in her immediate family. Her father Dr B.S.R. Murthy is a surgeon, her (late) mother Dr Adi Seshu was a gynaecologist, her (late) brother Dr Narendra was a general surgeon, her sister Dr Vamsi Pavani is a dental surgeon who runs her own hospital with her husband Dr Venkat and their son Pardha is in his second year of Medicine.

But all the medical help in the world cannot avert the recurring obstacles in her life. The first such obstacle came up when she was too young to be aware of it. Born in 1972 in Gajapathinagaram, 70 km from Visakhapatnam where she now lives, Sai Padma’s parents were all set to administer the polio vaccine to their firstborn at the age of three months – the guideline then prescribed (and later revised) by the WHO. But the virus attacked her when she was just 45 days old. It was so severe that it paralysed her entire body including her vocal cords. The infant received a series of 52 shock treatments – the known remedy for paralysis at that time. It did bring back her voice but her arm movements were limited and her legs did not function.

In childhood she was in and out of hospitals undergoing 17 surgeries on her lower limbs. Since walking involved her trunk muscles she gradually developed scoliosis, an acute curvature of the spine that dangerously compressed her lungs. So at 24 she underwent an18-hour spinal cord surgery. Bedridden for the two years it took to heal, she went through a period of depression.

Adversity, they say, is the best teacher. Padma made optimal use of its lessons. She developed a bold and outspoken personality. If you read her blog [lotusbeats.wordpress.com] you will discover a woman who brings taboo topics out into the open. Who writes about the ordeals of menstruating wheelchair-users and the sexual rights of persons with disabilities. A woman who asked a male friend, “Will you marry me?” and then proceeded to give him several reasons why he should think twice about it! This friend, by the way, is development professional Pragnanand Busi who became her husband, a soul-mate who is “filling my life with light and compassion”.

Only a woman with her tenacity to bear the hard knocks of life would have persisted in moving onward and upward. After securing diplomas in computers and classical music (“a weird combination” she jokes) she completed her post-graduation in Commerce, graduated in Law and did her MBA in Finance. “I’ve always wanted to work in the financial world,” she says. But despite her qualifications, none of the many job interviews she attended were successful. At the government-owned Hindustan Petroleum Company Limited her interview was on the second floor and the lift had broken down. With assistance she somehow reached the interview room and was asked, “If there is a fire accident how will you manage?” She said, “The same way I did today” and pointed out the malfunctioning lift and inaccessible toilet. “The system still sees disability employment as charity,” she says. “Inclusion and charity cannot co-exist.”

In 2008, the year she married Anand, she founded the non-profit Global AID [globalaid.in] which works in the areas of accessibility, mobility and employability, and runs hostels for underprivileged children in rural and tribal areas to provide education and means of employment. She finds time in between for her hobbies: reading, writing (in English and Telugu), and watching movies. Her coffee table book on Indian disability is in its final stages. She is a trained air rifle shooter (she finds swimming and shooting therapeutic), wants to write a script for an “inclusive movie”, and wishes to form a music band to raise awareness and funds for the cause of disability. “Labelling a person with just his or her disability is ignoring a greater ability – the ability to generate overall human development and inclusion,” she says.

This ‘Padma’ (lotus) has a thousand petals and a thousand more that are yet to unfurl.