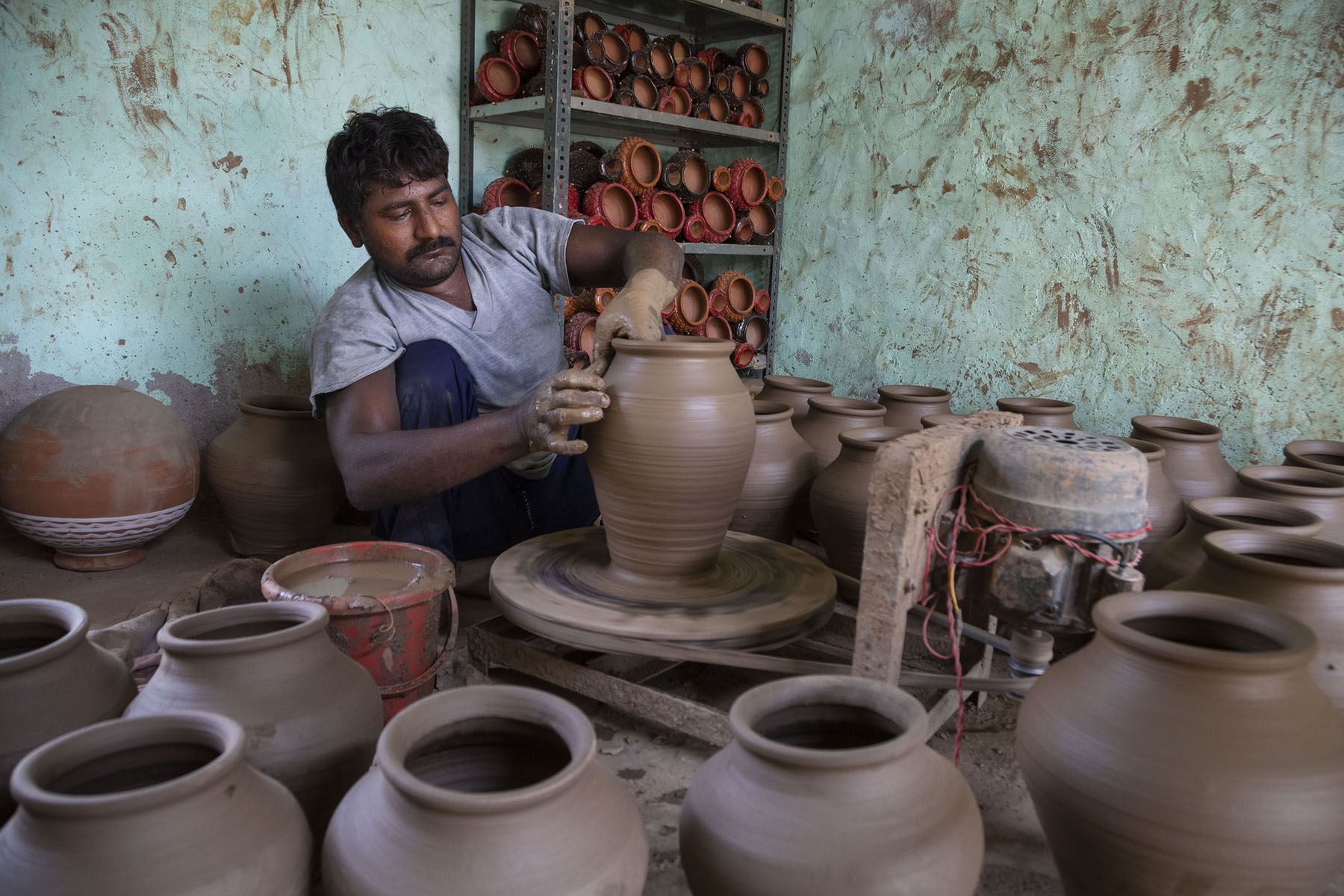 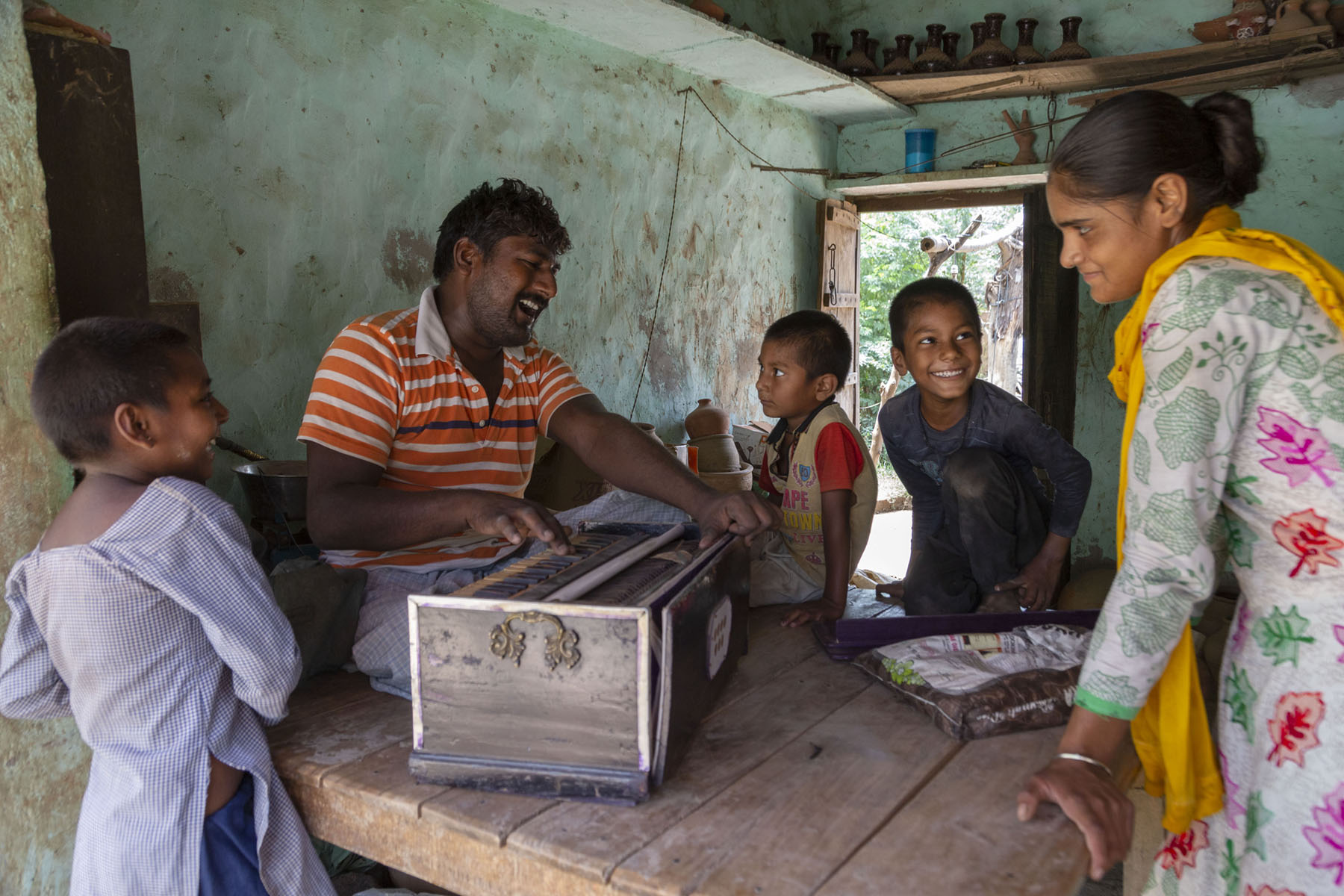 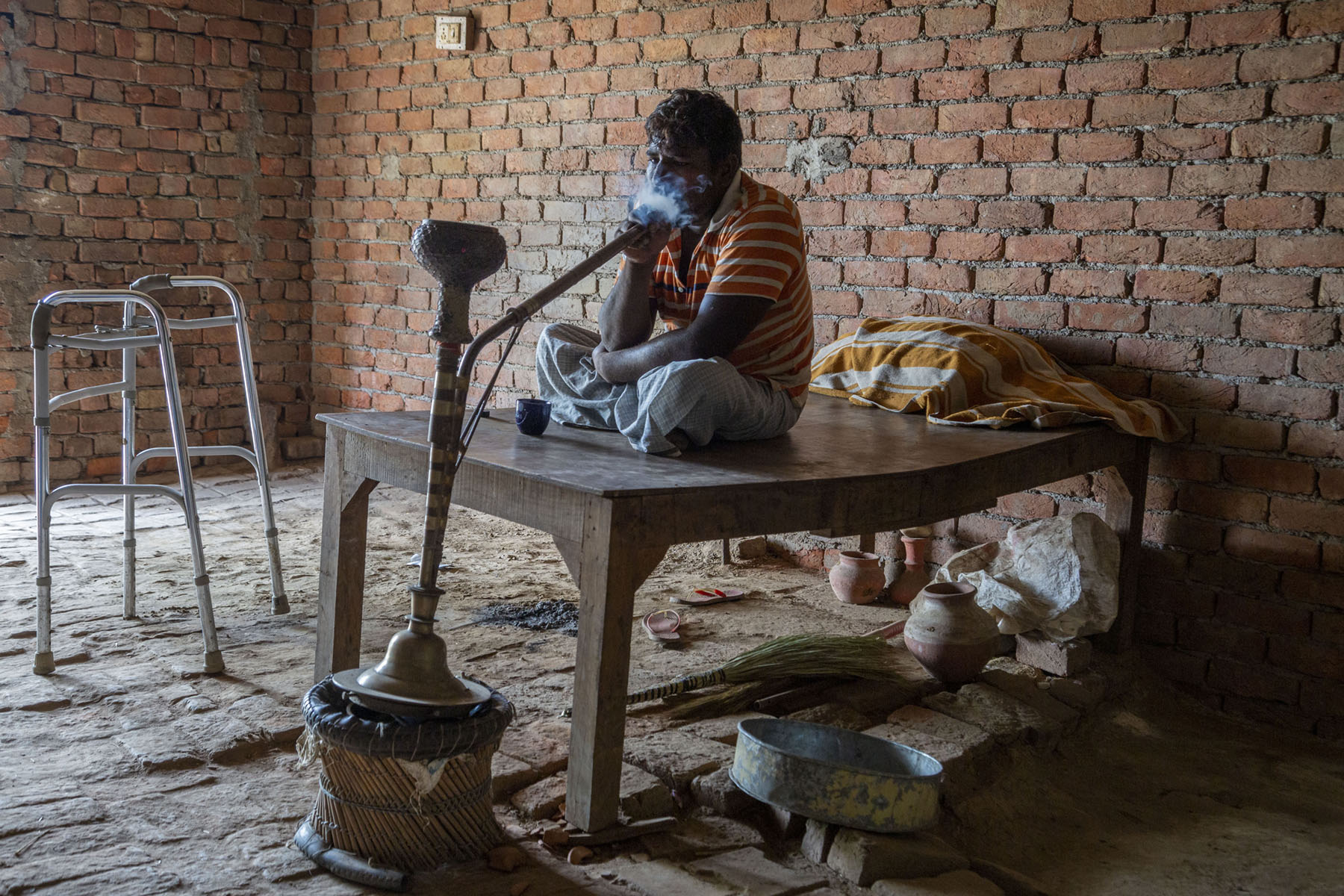 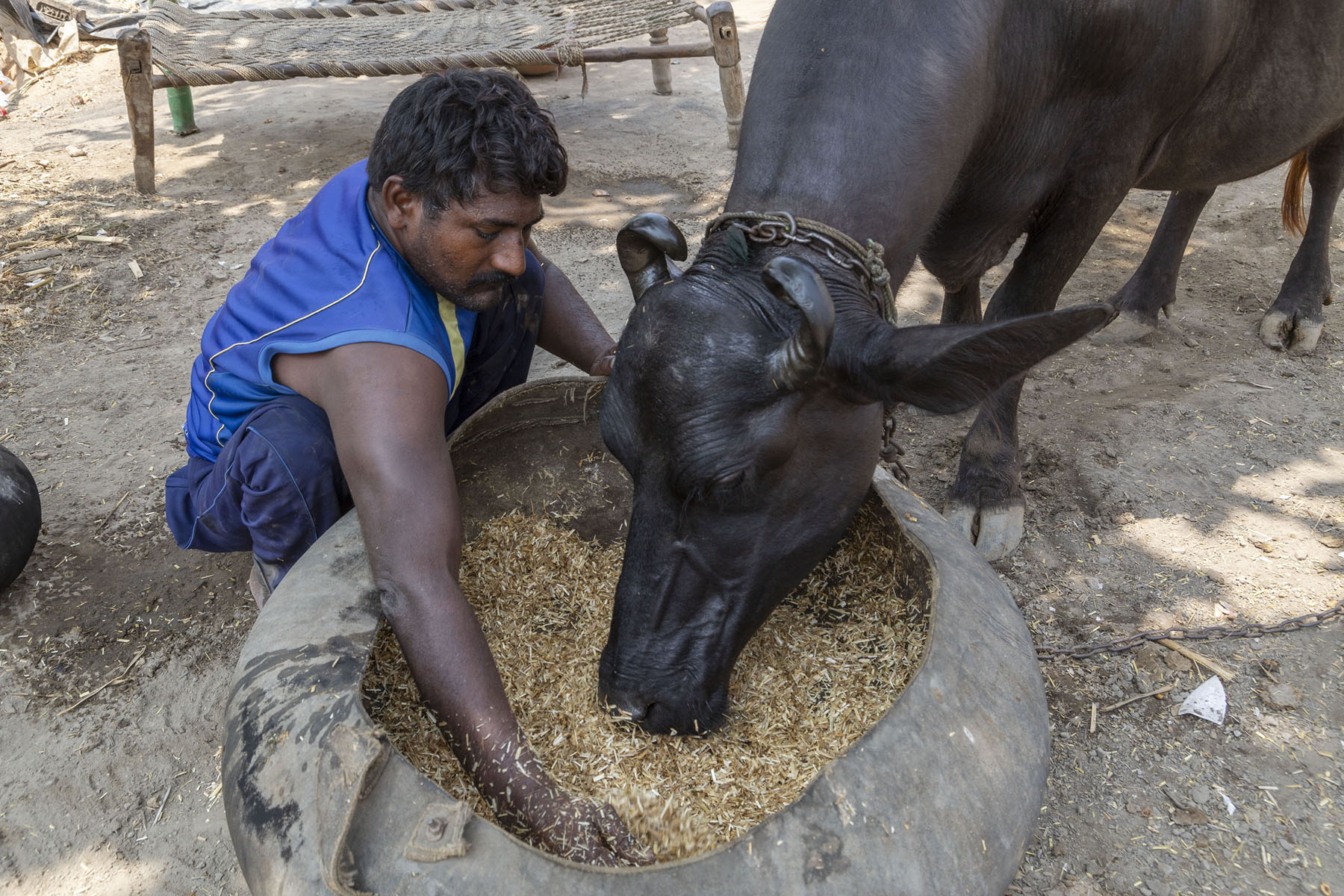 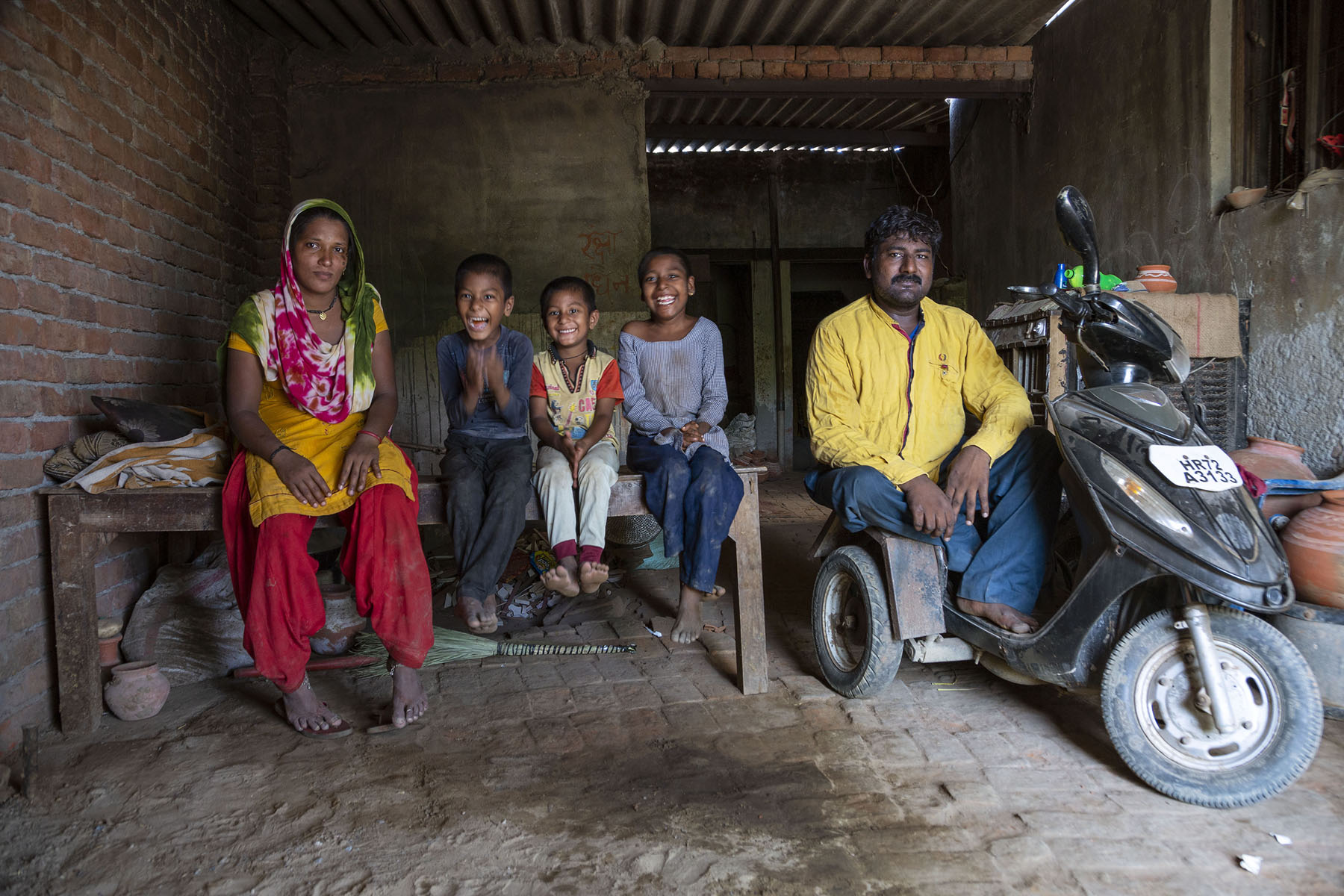 “When I sing, the music heals me and helps me see life’s spiritual side”

Ramotar (36) from Sohna in Haryana’s Gurugram district has finished shaping his latest batch of clay water pots and leaving them to dry. His wife Sonya (27) is tending to their buffalo. It is time for him to relax — smoke the hookah or play the harmonium.

Despite his contracting polio at age two, Ramotar’s father Mangal Singh wanted him to be educated and get a good job rather than continue the kumhar (potter) tradition. But studies didn’t appeal to him. When he was in seventh standard, Singh reluctantly taught him the ins and outs of earthenware pottery. And this education is what has given him a livelihood today.

Ramotar was the second among six children born to Mangal Singh and Murti Devi in Malab village, Nuh tehsil in Mewat district. Social conflict in the community obliged the family to move, and they settled in Sohna. Ramotar’s hero is his father, who was a robust 86 when he died of natural causes and had never needed to consult a doctor in all his life. He was a village panchayat member who wrestled and played lathi sports (stick games), and taught Ramotar the tabla and vocals (later he also learnt the harmonium).

After Singh’s father’s premature death he had taken care of his siblings and got them settled in life. Similarly, after Singh died, since his eldest son had left the family to start a brick kiln business, Ramotar became the father figure for his younger siblings as he eased them into jobs and marriages. And what about his own marriage? His aunt’s husband introduced him to Sonya’s family. She was charmed by his simple and direct promise to her: “Whatever my condition, I will do my utmost to keep you happy.” Moreover, he was earning commissions from getting investors for a private insurance company which had given him a loan to buy a ‘disability scooter’.

The company was investigated for money laundering and it shut down. Ramotar was greatly distressed when his income dried up but Sonya wisely suggested: “Since you are so skilled in pottery, why not make it your new profession?” And that’s what he did. With skill-enhancement training from the Navjyoti India Foundation he now manufactures clay objects such as the water pot, diya (lamp), kulhad (unglazed tea cup), chillum (bowl at the base of the hookah for smoking tobacco) and gullak (piggy bank).

Music is his passion. He is part of a troupe that is regularly invited to sing bhajans at all-night gatherings for religious festivals. With three lively kids and a caring wife whom he adores, Ramotar says, “My family is my world.”