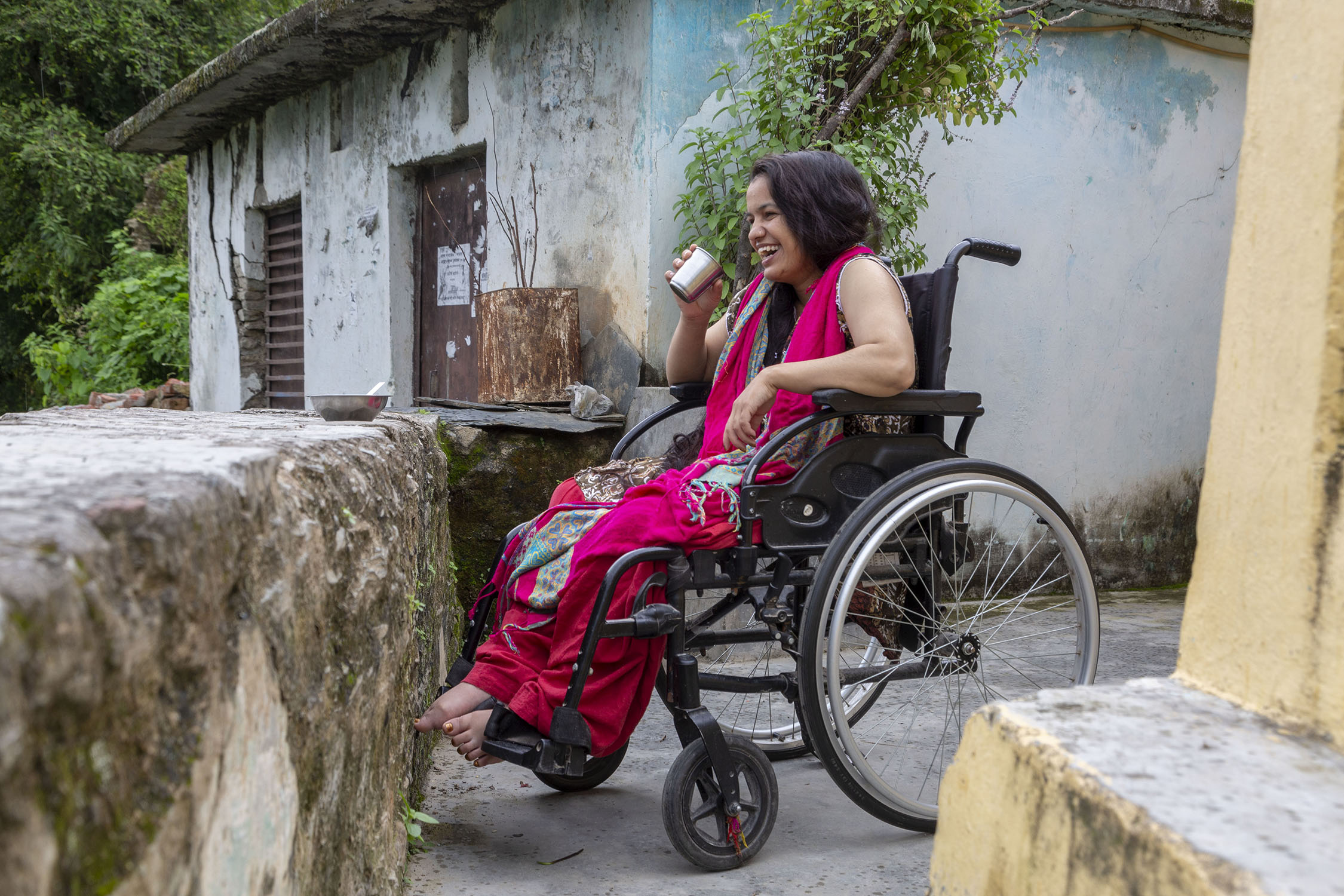 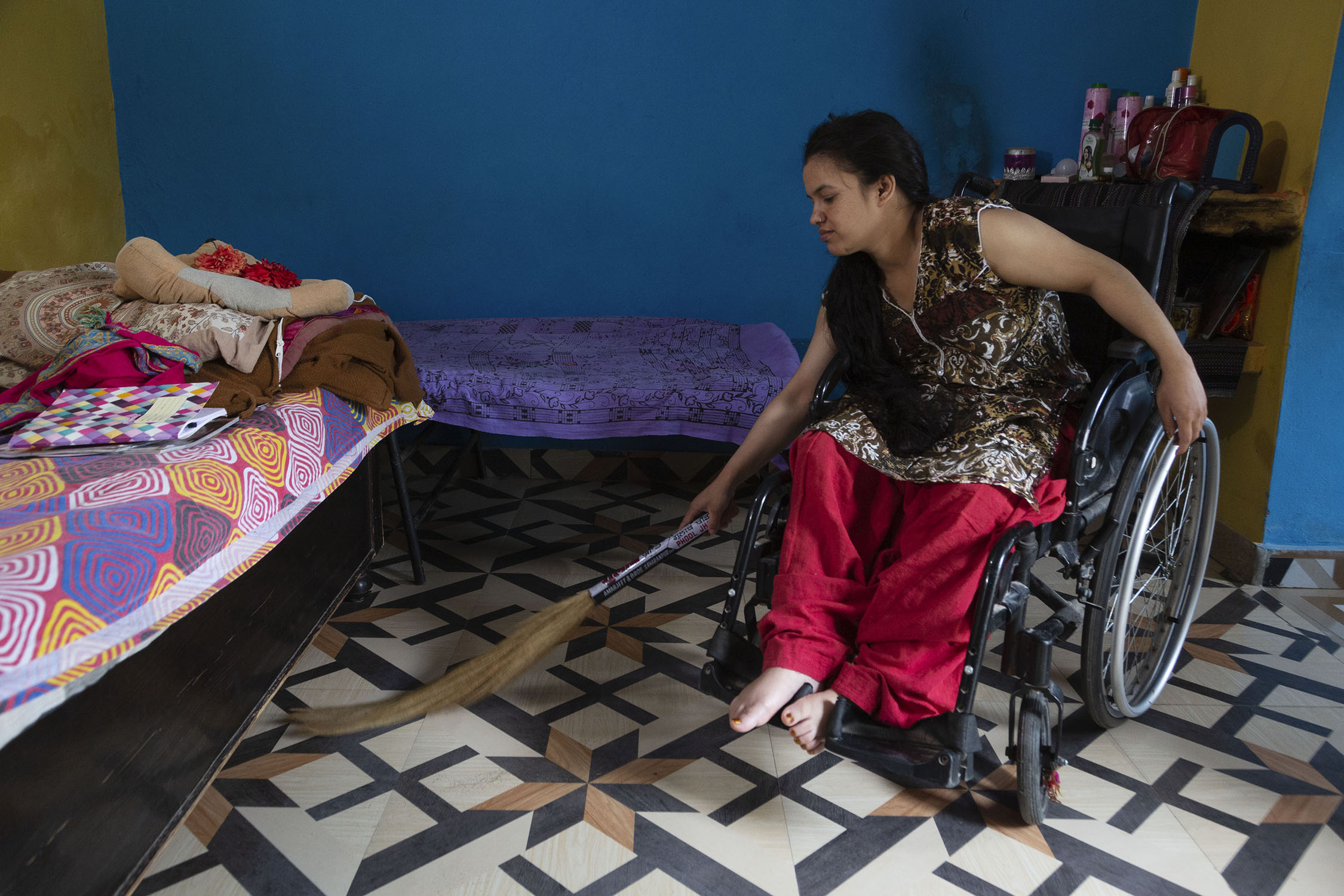 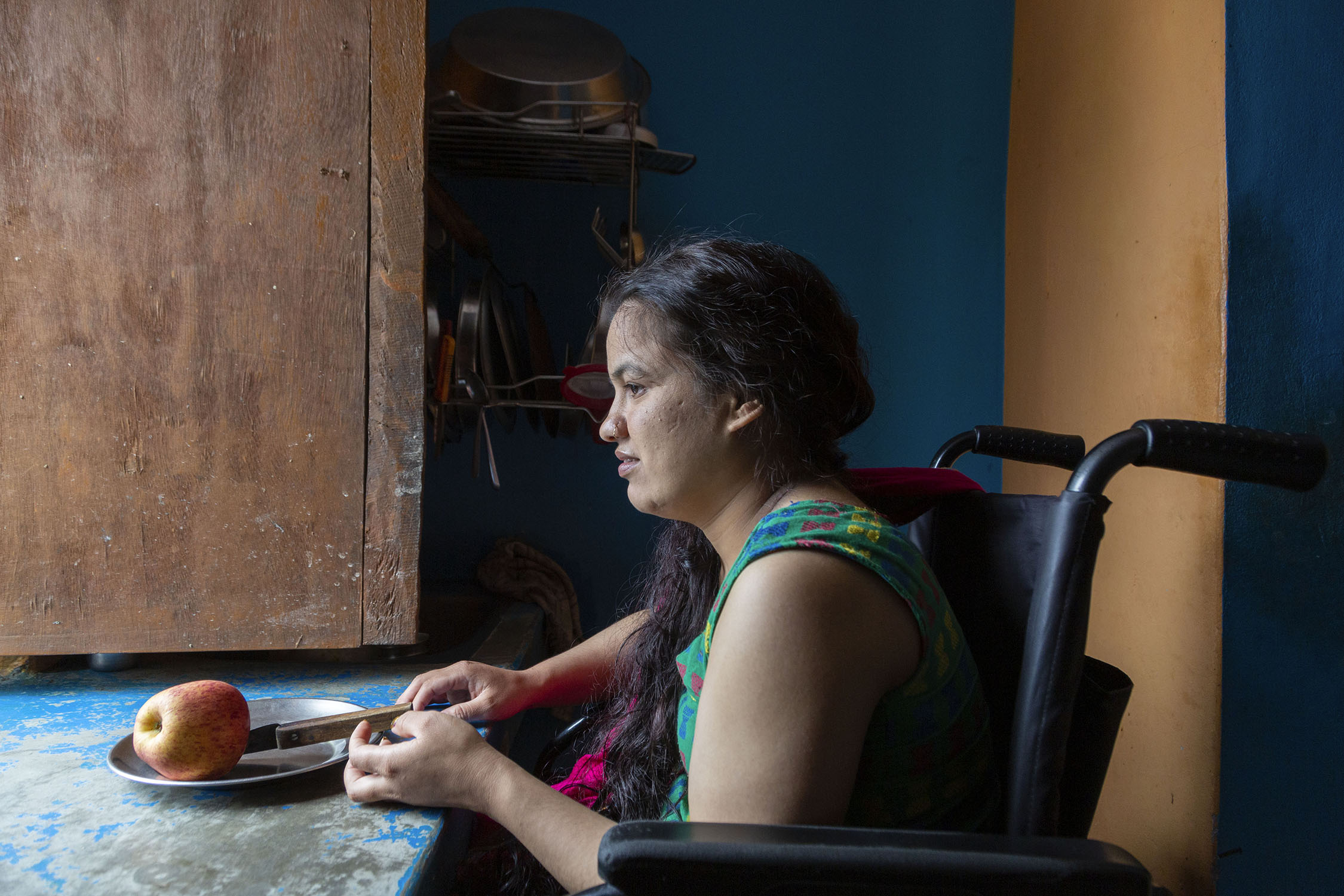 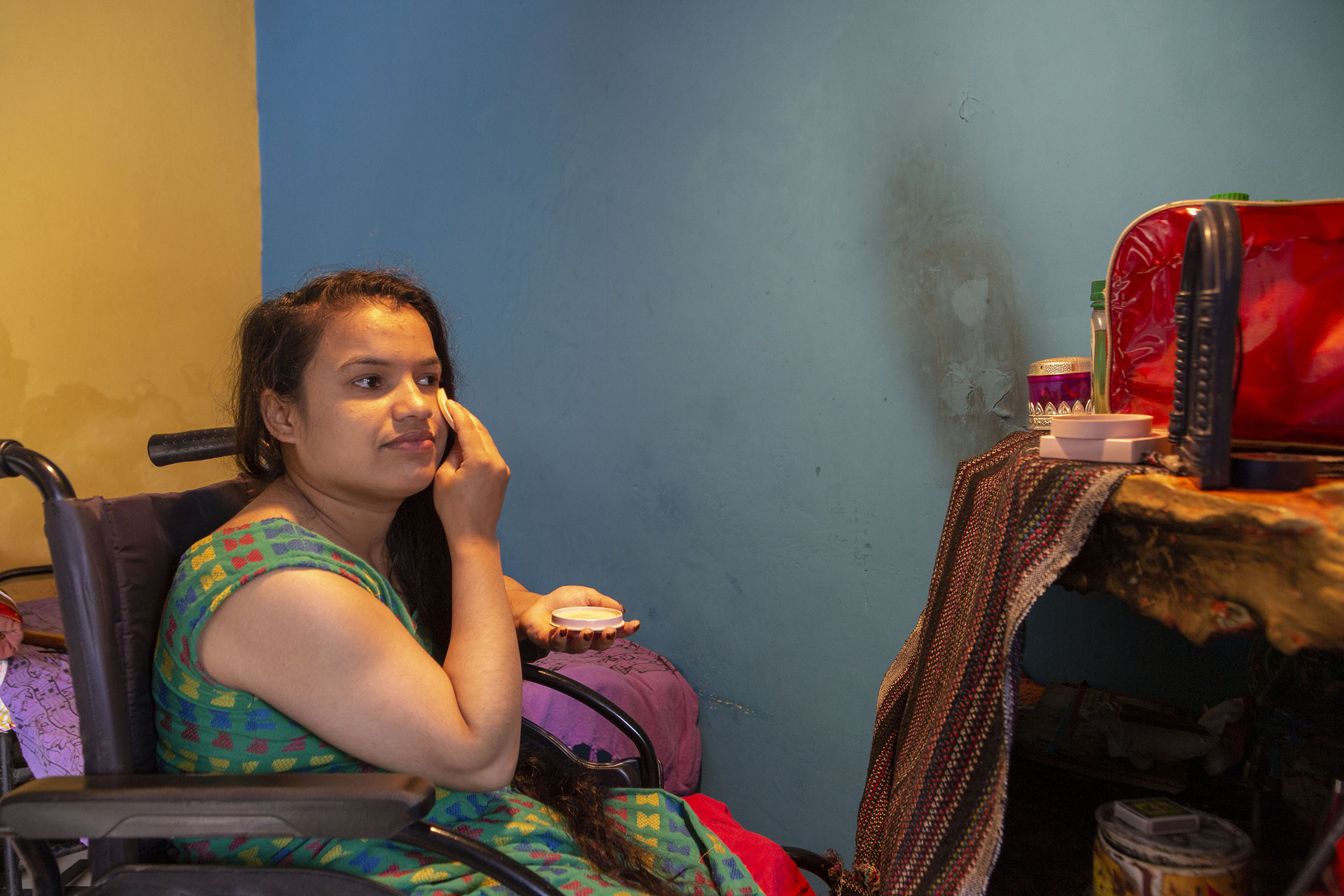 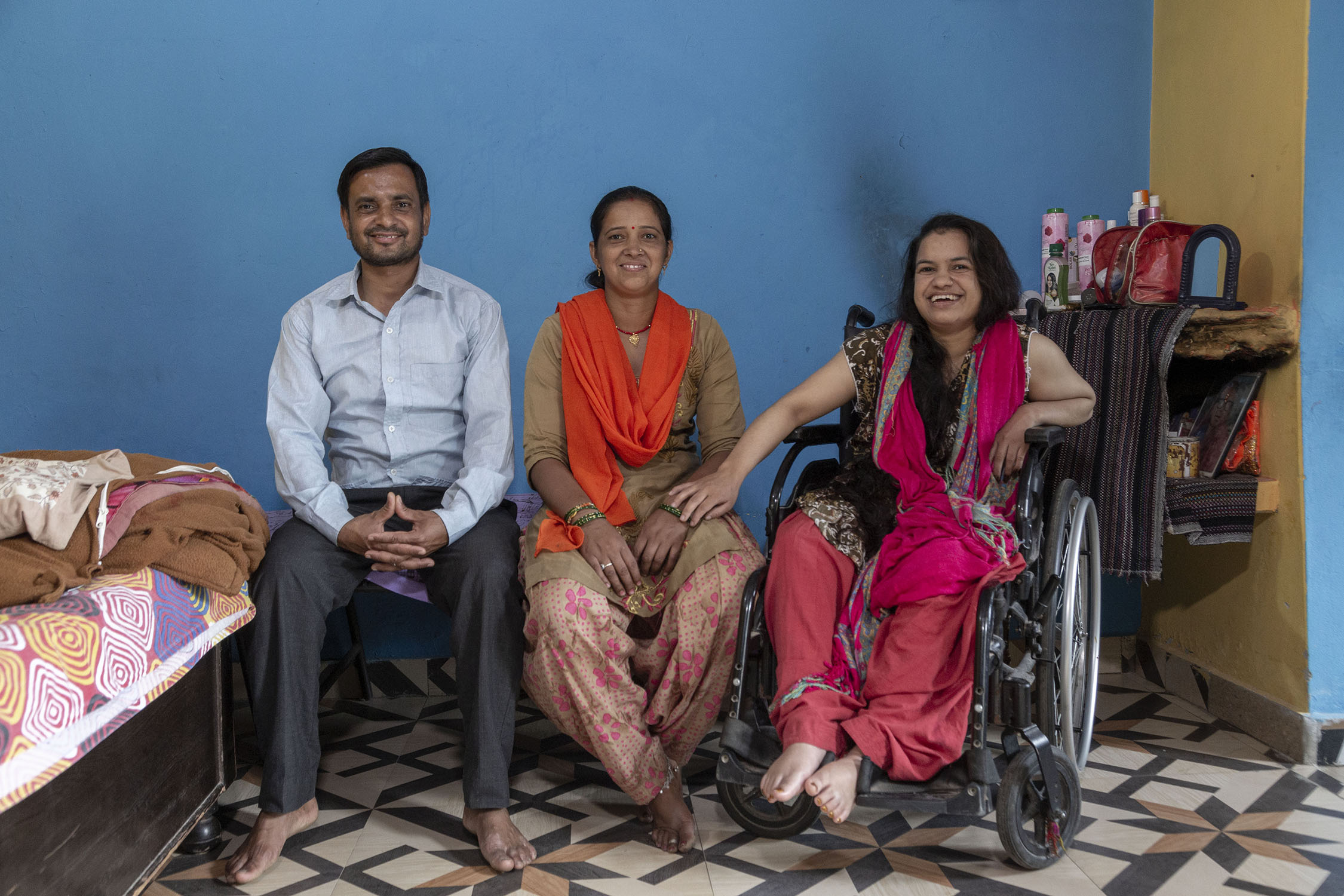 “Even when life is harsh, follow your heart and don’t complain”

In the mountainous region of Tehri Garhwal in Uttarakhand, in Devprayag tehsil’s Garakot village which has a population of a few hundreds, a young female wheelchair user with paraplegia lives alone. That sentence in itself should stop you in your tracks. The story that follows, of the cheerful 25-year-old Preeti Badoni, might just leave you dumbstruck.

Preeti was a middle child with an older and a younger brother. Her father was a labourer in the city of Srinagar in the neighbouring district of Pauri Garhwal, two hours away from Garakot. He rarely came home. When Preeti was two-and-a-half her mother died. How could the little ones fend for themselves? Their father remarried, but life got worse for Preeti. As soon as she was able to carry out household duties, fulfilling her daily needs was a tradeoff against her performance. Do the housework if you want food, clothes or other bare necessities: that was the unwritten rule. There were days when she ate nothing.

When Preeti was 17 and had passed Standard 11, the family decided to marry her off. Although she was disappointed over discontinuing her studies – the bridegroom had a job abroad – she hoped her life would improve. But just seven months after her engagement, in 2014, she fell from a tree and injured her back. She was taken to Srinagar but no hospital had the wherewithal to treat her. Their next stop was Dehradun, where her elder brother worked. Doon Government Hospital was of no help, and it was at Shri Mahant Indiresh Hospital that doctors finally conducted two spinal surgeries on her. After 15 days of physiotherapy, she was discharged in a wheelchair, with waist-down paralysis.

Preeti’s trauma did not end there. Even while she was in hospital, her big brother brought their younger brother to Dehradun to finish his studies. When she returned home, her father went back to work in Srinagar and her stepmother left for her mother’s house! In short, she was left to her own devices. Loss of control over bladder and bowel movements meant that she often soiled her bed. She developed bedsores. Slowly she gained wheelchair skills and learnt to move around using her hands. In two to three years she was cooking, cleaning the house, and managing her day-to-day activities.

When your family abandons you, sometimes angels step in. Ajay Pant who worked for Samoon Foundation heard about her from the villagers and visited her. “He showed me beautiful green valleys,” is how Preeti poetically describes her first impression of him. Ajay-bhaiya took her reports to doctors to check if any medical intervention could improve her condition. When the answer was ‘no’, he found out what Preeti most needed in her life. A kitchen next to her room, she said, and a western-style toilet. While going on social media to seek donations for her kitchen, he introduced her to Facebook, through which she connected with other spinal-injury survivors.

Seema Negi, a government teacher and a resident of Srinagar, has been another pillar of support. Seema and Ajay, whom Preeti calls “khuda ke farishte” (angels of god), have been able to provide her basic needs such as a motor for steady water supply, a heater and a blanket to beat the winter chill. She needs to use adult diapers, which are quite expensive. “Thanks to Seema-ma’am I can buy diapers. She also helps me with clothes,” says Preeti, adding, “She is more than a mother to me.” While her family members are busy leading their own lives and offer no financial support, these two angels drop in regularly and never miss visiting on festival days.

Some people in Garakot help her in their own way. For instance, she calls the village grocer when she needs provisions and he has them home-delivered. She likes listening to old Hindi film songs. When village elders visit her she likes listening to the stories of their younger days. When an outsider comes home, in order to avoid gossip she invites the pradhan (village headman) Pradeep Badoni. Pradeep, his wife Yashoda and their two daughters were present during Vicky Roy’s photography session.

Preeti has created a rhythm to her life. She has no regrets and no complaints. Any fond wishes? In childhood she wanted to “be a big doctor and go to America”. A trip to the US would be a dream come true. As for employment, she points out that she cannot use her wheelchair outdoors because of the hilly terrain but she wouldn’t mind doing some work online.