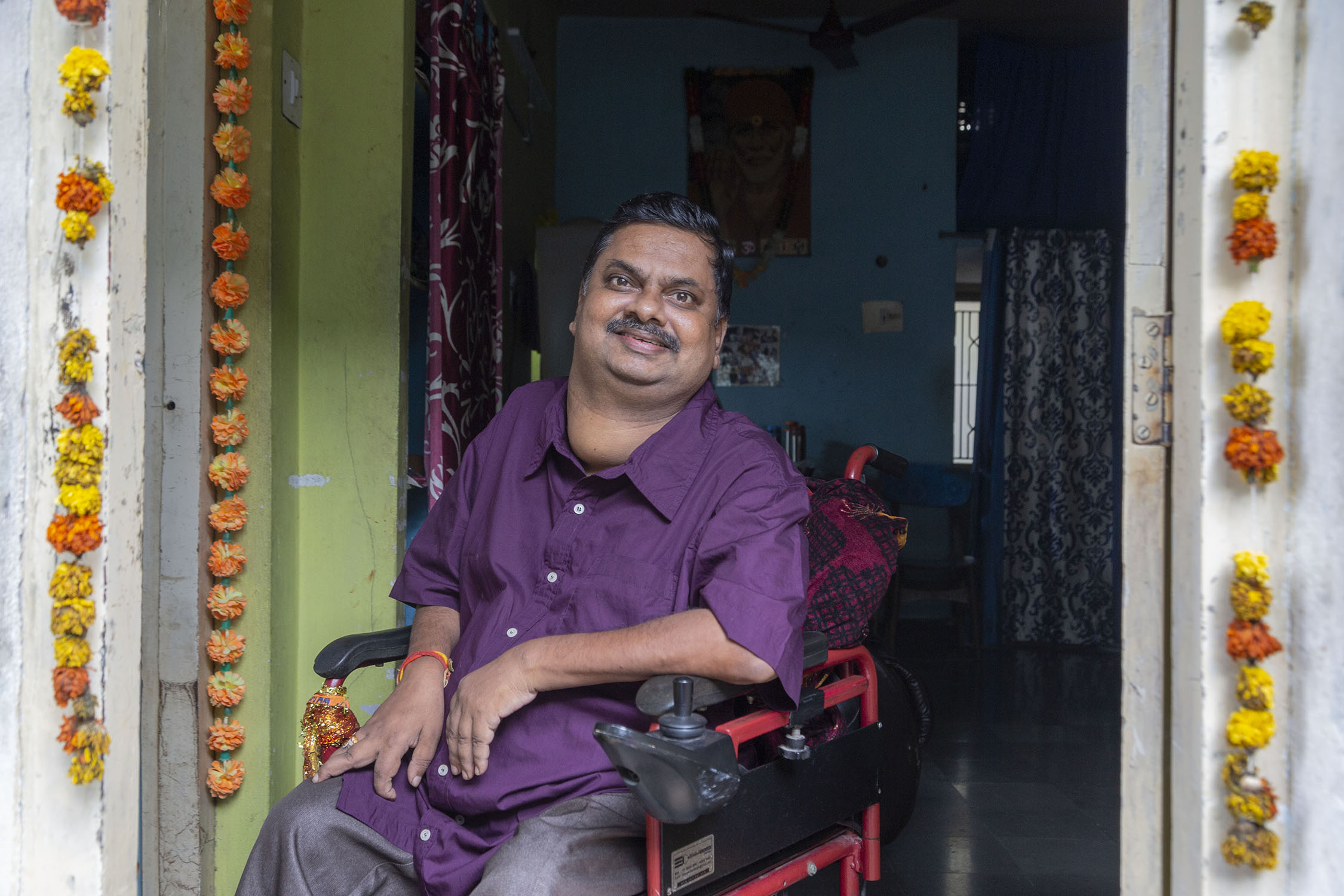 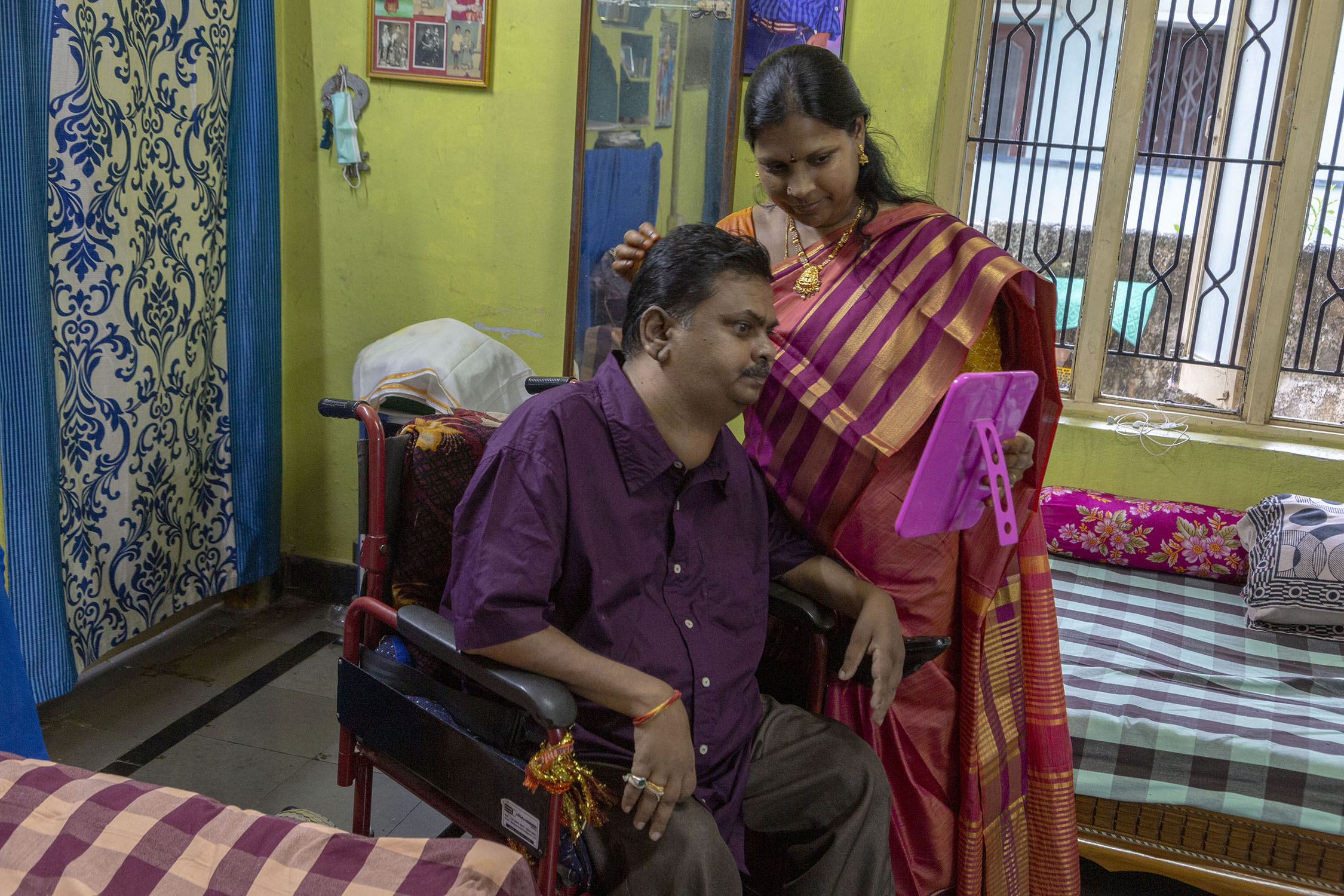 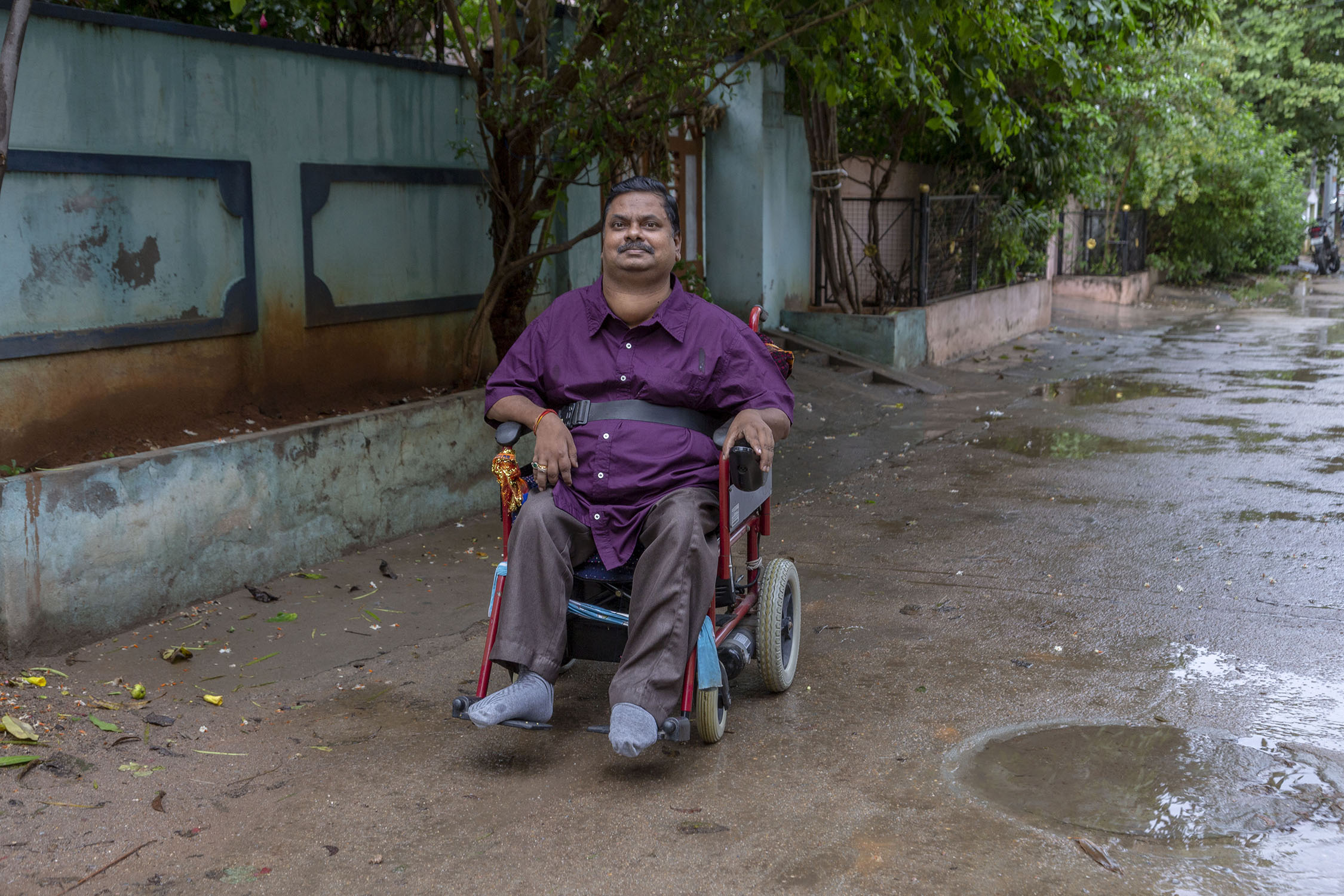 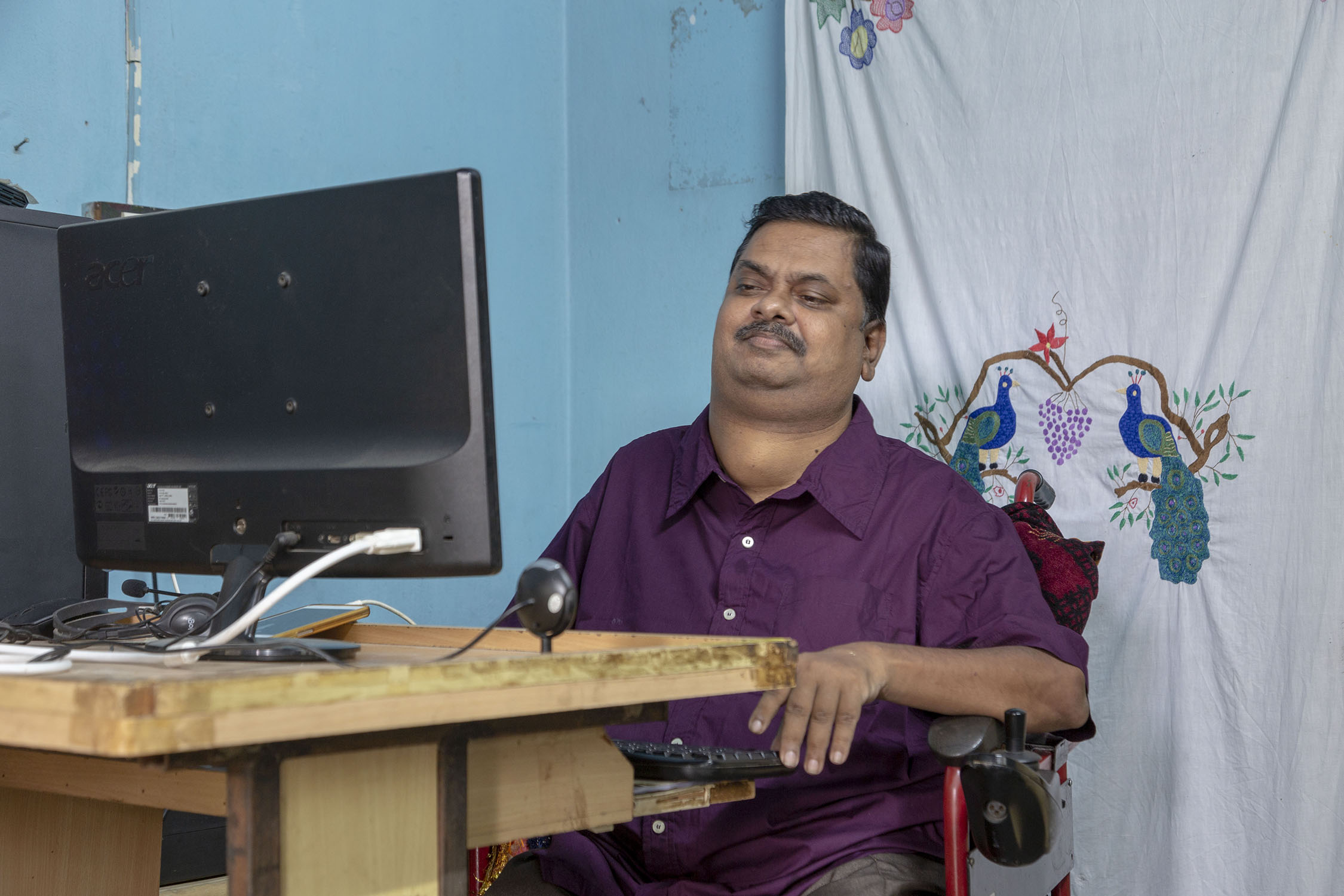 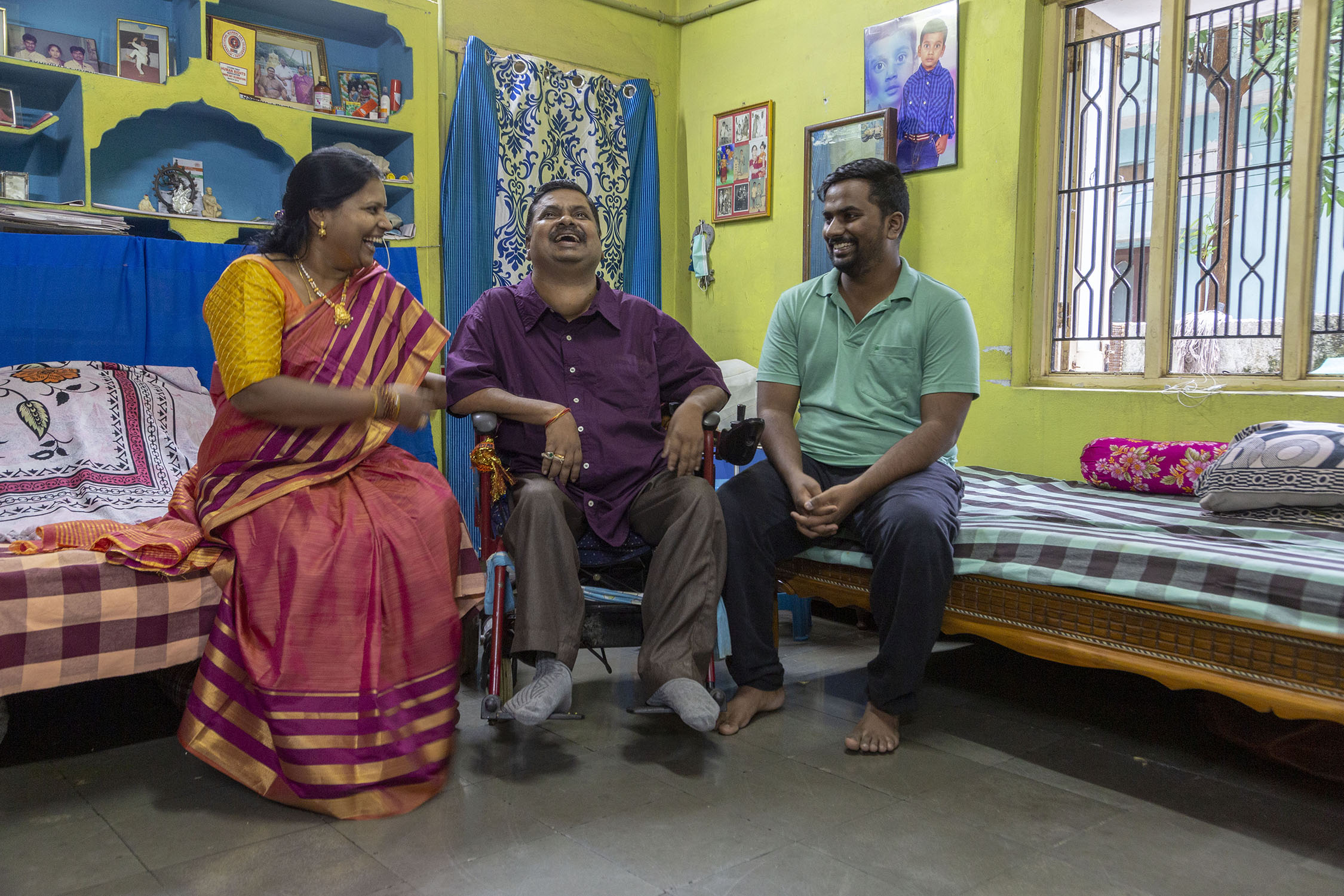 “Don’t give up too early. Even if one door closes, another one will open”

When it comes to stories shared at parties, few can surpass one that begins with “When I met Amitabh Bachchan…” A scriptwriter could create a dramatic movie sequence with the events that preceded Narsing Rao Bongurala’s encounter with the superstar.

The 47-year-old from Hyderabad, who was diagnosed with Muscular Dystrophy (MD) at the age of 12, is a website and graphic designer. He also happens to be a movie buff and an ardent Amitabh fan. In 2016 his son Sai Manikantha Teja (21) told him about a contest for a poster design for the Hindi movie “Teen”, organised by Talenthouse India, the India branch of a global art networking site. The winners would get to meet Big B in Mumbai, and their posters would be splashed across hoardings in their home cities.

Narsing submitted his designs. His joy knew no bounds when Talenthouse emailed him that he was one of 12 winners. The superstar being super busy couldn’t block a date for their meeting and would schedule it at short notice. Sure enough, Talenthouse called Narsing one night in June, saying he had to board the eight o'clock flight next morning. They had no idea he was a wheelchair user with high support needs! Once he had explained the extent of his disability they said they would pay for the tickets of his wife Jyothi (38) and their son as well, and would meet him at the airport in Mumbai.

The 8 a.m. Air India flight was delayed. Getting to the venue by noon was impossible. Narsing frantically contacted the AI staff and convinced them that this was a genuine emergency. They sympathised with him and kindly transferred the family to a private airline flight bound for Dubai. But on seeing Narsing in his electric wheelchair the airline staff said that batteries were not allowed on board. No airline would raise an objection today, but remember, the 2016 Rights of Persons with Disabilities (RPwD) Act had been passed barely two months earlier and none were aware of its rules. He had to phone the wheelchair manufacturing company so they could speak to the airline confirming the battery specifications.

The flight landed on time at Mumbai International but the Talenthouse people were nowhere to be seen. They were waiting for the AI flight at the domestic terminal! After they had sorted out the muddle, things ran smoothly. The stage had a ramp and they positioned Narsing and family at the far corner of the stage so that when his name was called he could swiftly approach his hero. And so ended what he calls the most unforgettable day of his life.

Narsing has certainly led an eventful life. MD being a degenerative disease he progressively lost his mobility. After he completed high school through distance learning, he stayed at home for almost six years, watching cricket on TV and reading books, cricketing magazines and other material in English, Hindi and Telugu. At 23, he applied for the government scheme of PCOs (public telephone booths) for PwDs and ran a PCO, earning Rs 40-60 a day. By then his brother had bought a personal computer and Narsing was drawn to it. Seeing him play games on the p.c., one of his friends suggested that he take up piece work, typing letters and reports to supplement his income.

At 25 he got married. Wanting to upskill, he considered a one-month training course in desktop publishing but since travelling would be difficult his brother attended the course and taught him what he’d learnt. DTP became his sole means of livelihood. He started with journals and progressed to books; from 2003–2008 he published 50 books. Gradually he mastered all the emerging web technologies. He has been in the field of graphic designing, web designing and content management for almost 18 years now, and is also an accessibility consultant for several corporates. “From a stage of ‘no opportunities’ I made opportunities come to me,” he says with justifiable pride.

His next step was to create opportunities for others. Without taking a single penny he has trained almost 100 people in word processing, graphic design and web technology. From 2013 he has been working on digital and environmental accessibility for PwDs, starting an NGO called WOW (Wonder on Wheels) Foundation. For two years in a row he won the Government of Telangana’s State Award for best individual working for PwD empowerment.

“Disability is not the end of life,” says Narsing. “We should be able to move independently, for which all public spaces must be made disabled-friendly.”