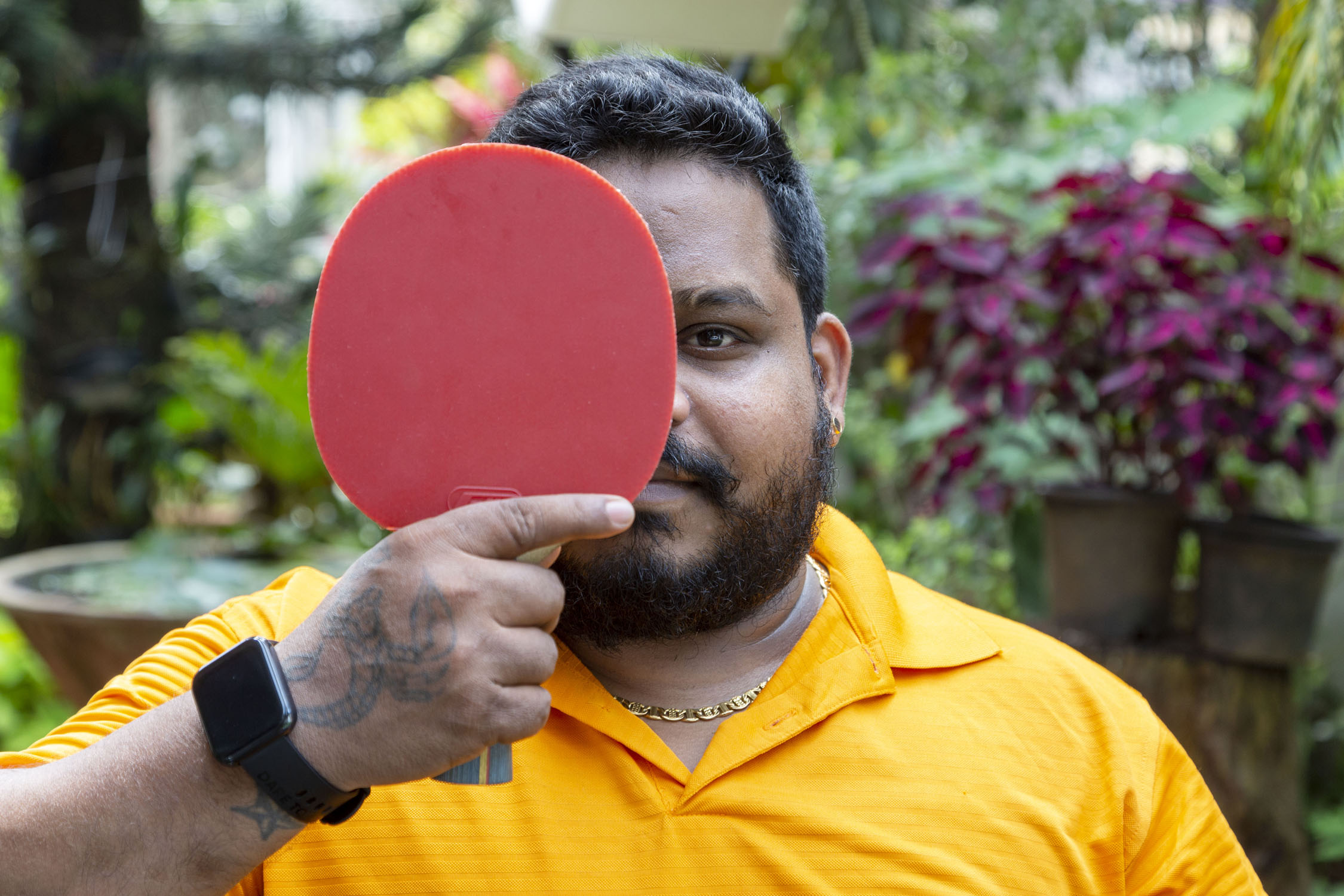 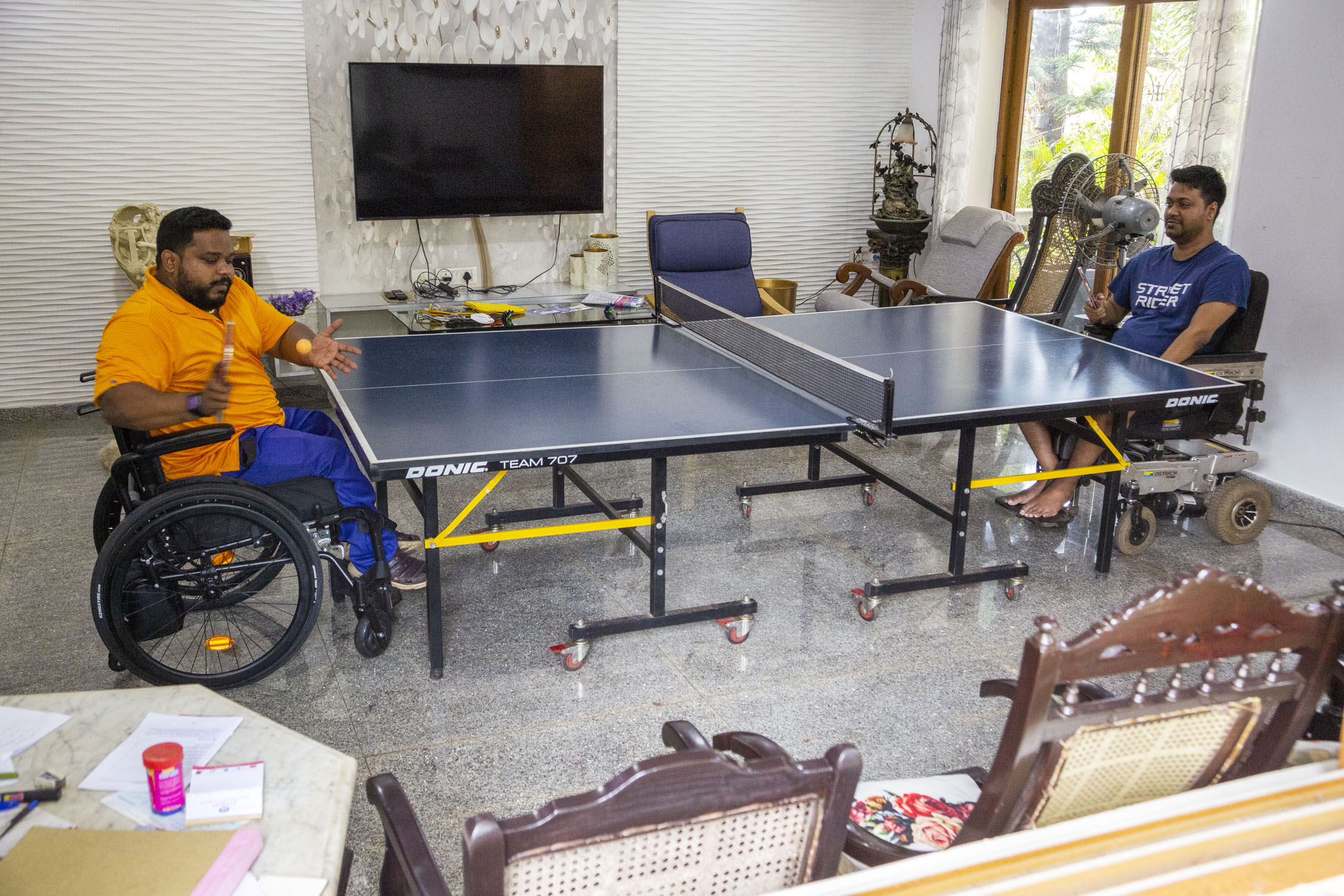 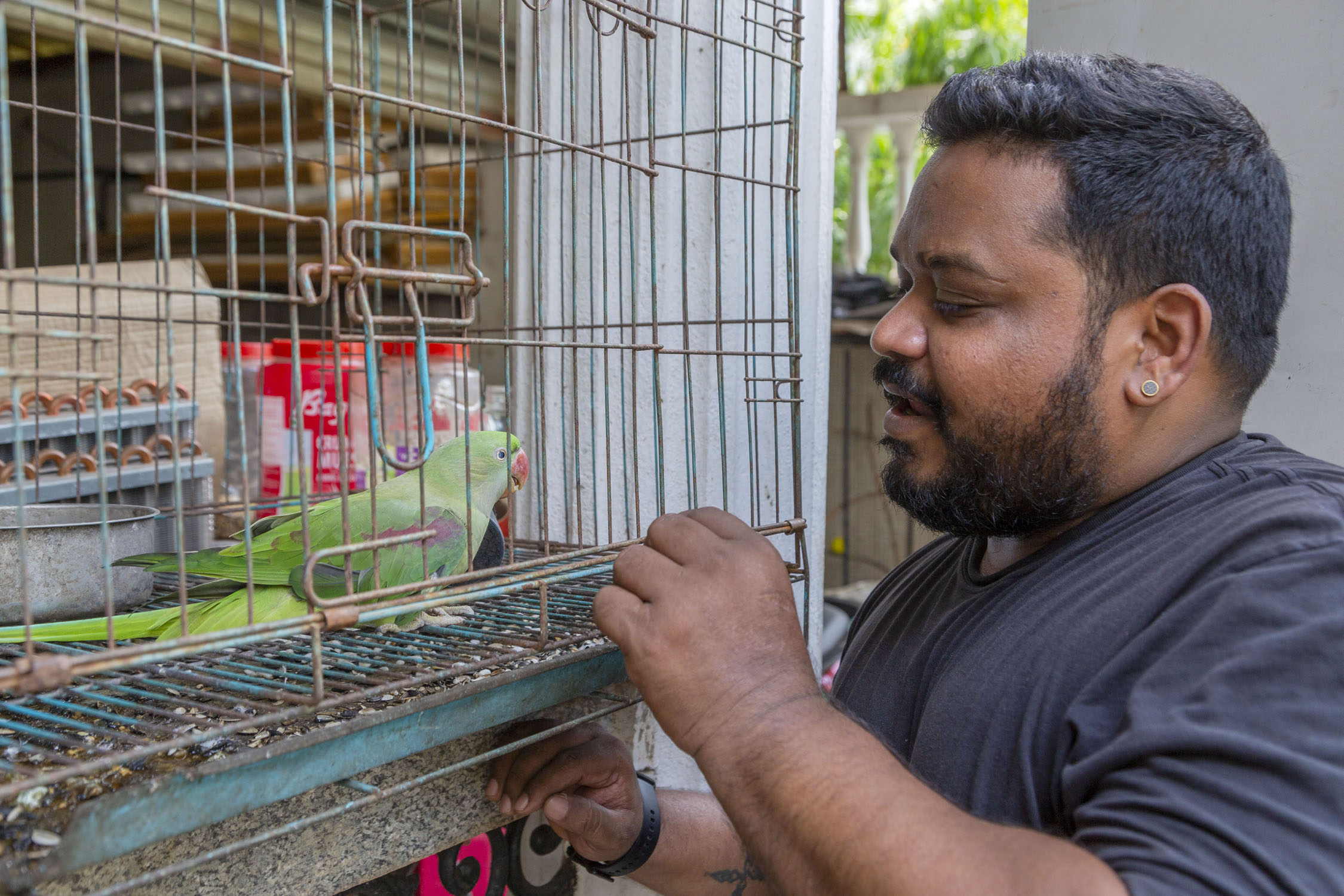 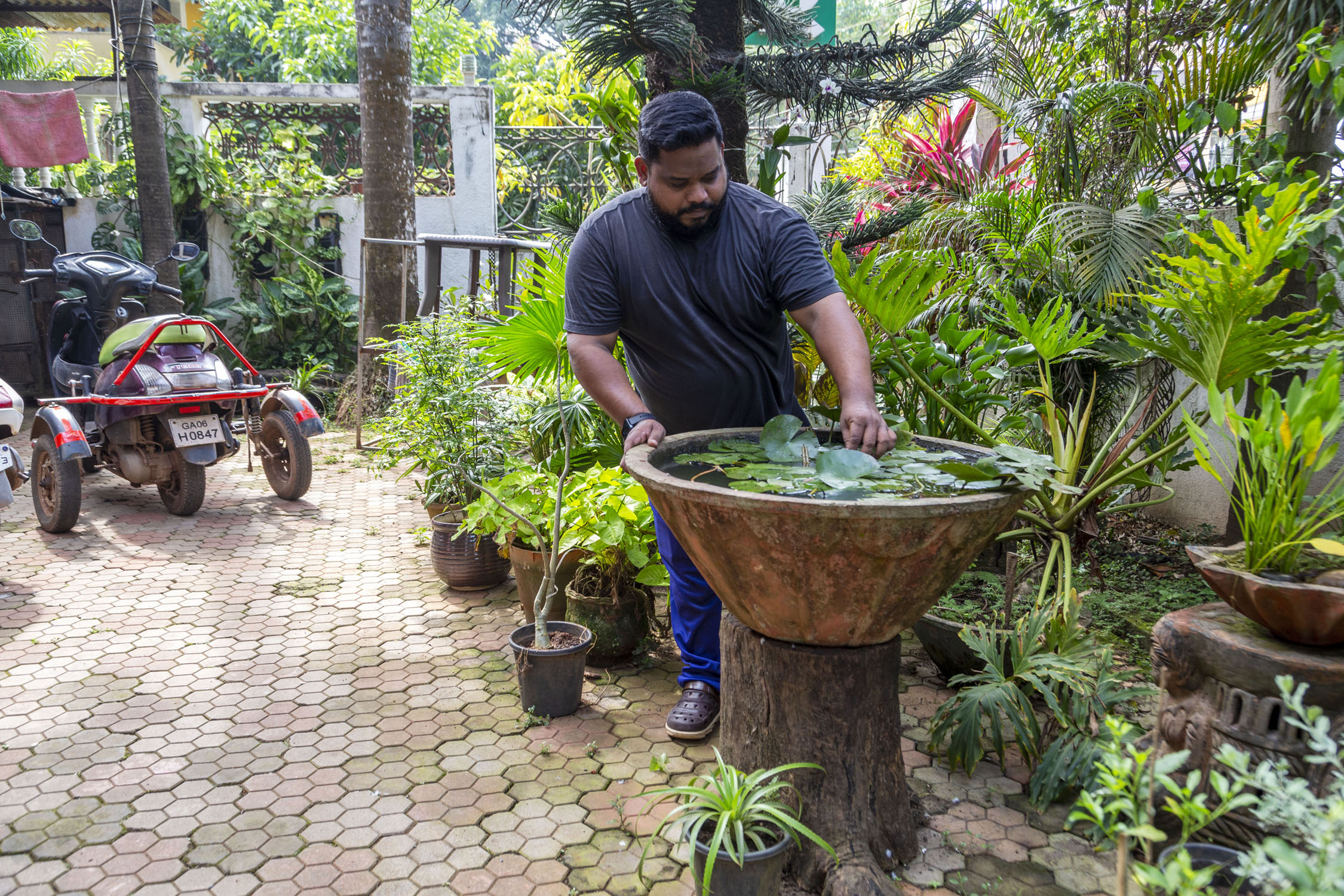 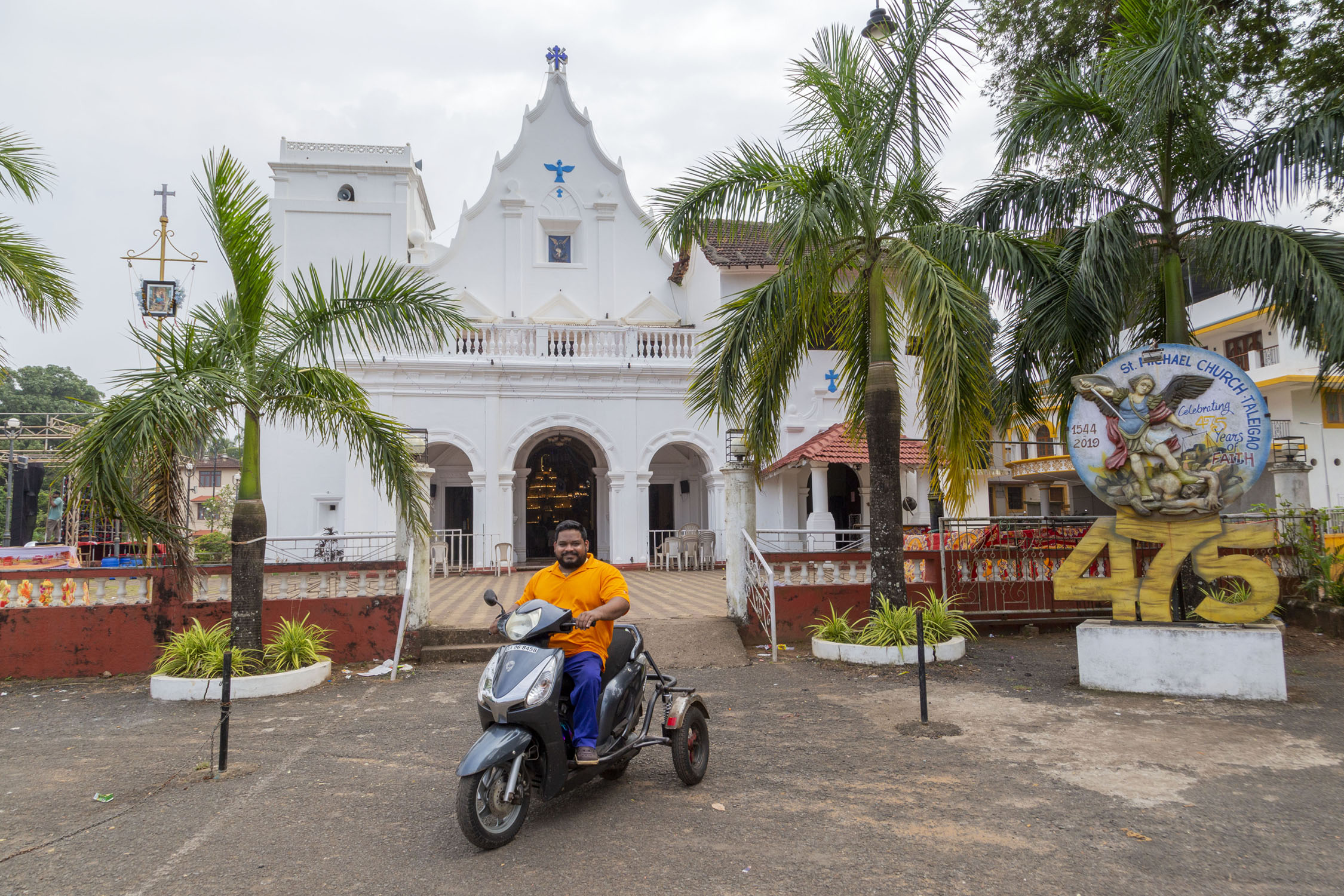 “Never say no to anything in life. Try it out and see if it works or not”

Every weekend Moises Rodrigues (36) from Mormugao taluk, Goa goes from the housing board colony where he lives to his friend Ruki Ahmed’s house to practise table tennis. They are both wheelchair users and sometimes their friend Lloyd also joins them. It was during one of these sessions that photographer Vicky Roy captured Moises and spent the day shooting him.

When we asked Moises about the unique spelling of his name he laughingly replied that his father Mariano gave it to him and he probably spelt it the way it was pronounced locally. Mariano Luizinho Rodrigues was a welder in a shipyard company. When he died, Moises was around seven years old and life became a struggle for his mother Asha, sister and himself. Both children had to shift from a private school to a government school and Asha started doing domestic work. With her earnings, window’s pension, and rent from a portion of the house that they let out, they made ends meet. His sister had to drop out after seventh standard and start working too. He initially used callipers but when time came to change them as he grew older, he found them too expensive and started using a stick for support.

Moises, who was born in New Vaddem village in Vasco Da Gama, was just over a year old when his parents took him to be given oral polio vaccine (OPV). The orally administered drops appear to have given him polio, in one of those extremely rare cases of “vaccine-associated paralytic poliomyelitis”. (OPV uses a live poliovirus while IPV uses an inactivated one and is an injectable vaccine.)

In school he missed playing with his friends and going on school picnics. Since school was only half a kilometre away from home he could walk there but college was another matter. He stopped his studies after high school and did nothing for two years. Although he was just a teenager he felt impelled to contribute to the family income. He started working in a general store for a monthly salary of ₹ 2000. Then he worked as a cook’s assistant in a bar and restaurant, washing vessels, cleaning and cutting fish and vegetables and sometimes waiting tables; they gave him only food and no salary. The bar owner had a soda bottle factory and employed him there to wash used soda bottles.

By then Moises had got himself a disability certificate, which entitled him to a free bus pass. He decided to go looking for work in Verna Industrial Estate 20 km away. He got a job in a company’s packing department and was placed on the assembly line. The company, which followed the practice of mass-hiring people for seven months and retaining only a few at the end, dismissed him after his term was over. He was 23 when he applied for a government job in the Mormugao Municipal Council. After submitting a letter and meeting the “sir” every other day he finally got a temporary job in the reading room in place of a staff member who was on sick leave.

When Moises went to a government hospital to get free callipers, they turned him away saying he was anyway able to walk without external aids. So he bought a secondhand scooter for ₹ 20,000 but when he tried to ride it with his one, partly-functioning leg he fell down. He went to the showroom to ask whether they could adapt it and they told him about the side wheel attachment. He ordered the attachment from Indore in Madhya Pradesh and it was delivered after one month.

After four years of temping, in 2010 he finally got a permanent job in the Council in the ‘worker’ category. “It was the happiest moment in my life,” he says. Or was it the second happiest? Because in 2015 he married Steffy D’Souza! For 11 years he has been doing clerical work in the store and maintenance section on the ground floor, maintaining the records of the workers, writing their names in the attendance register and marking their leave. “I am happy and content with my life,” he proclaims. In his spare time he enjoys indoor games, music and movies.

Sport brought out another facet of Moises when he became a member of the Disability Rights Association of Goa (DRAG). In 2018 he attended an awareness camp and training for wheelchair basketball, and in 2019 he took part in a para table tennis (TT) coaching camp and tournament. He won a silver medal in wheelchair TT at a district level tournament in October 2021.

As a DRAG member Moises helps spread awareness of para sports among persons with disabilities and wishes that more of them would be encouraged and assisted to take up sports.