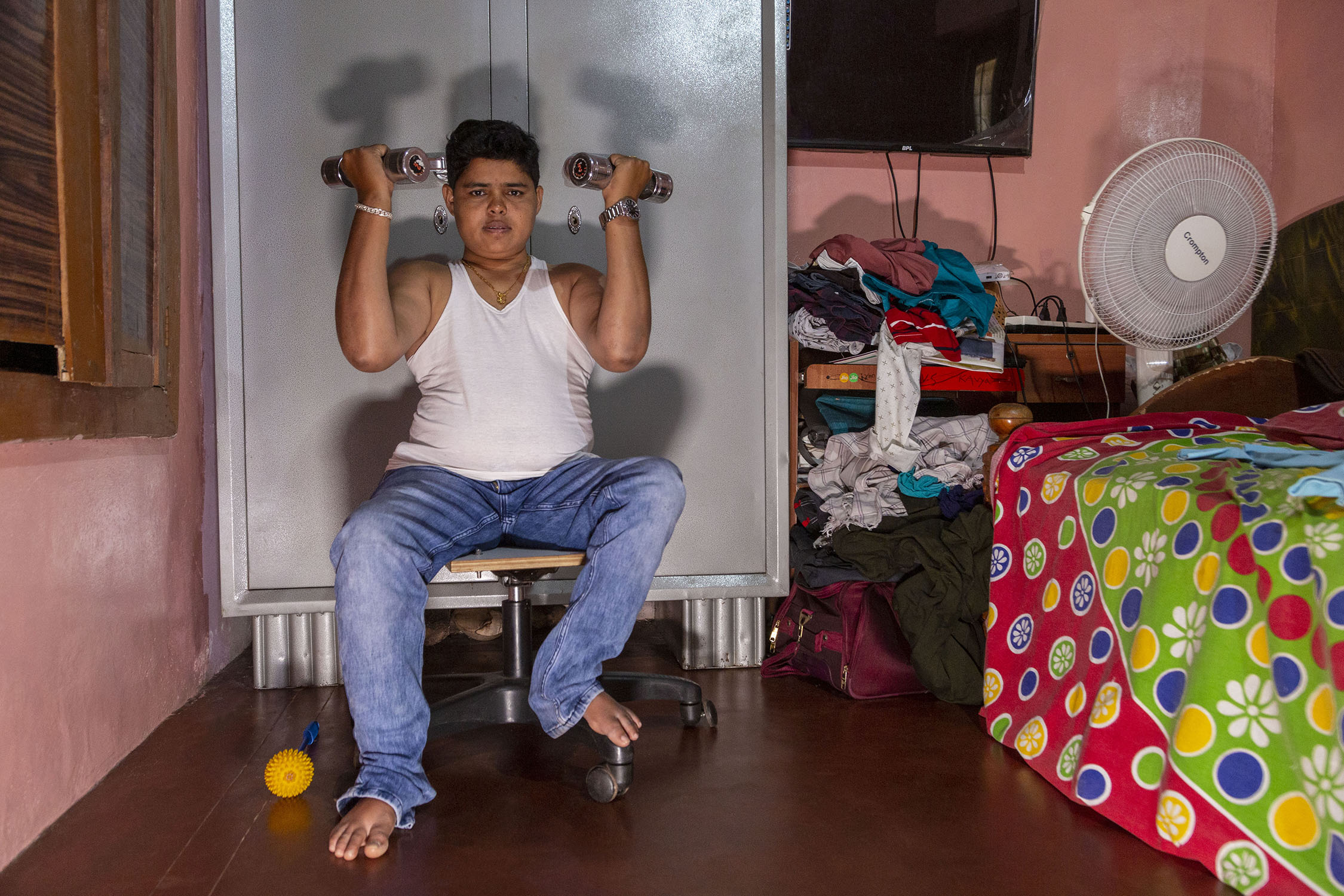 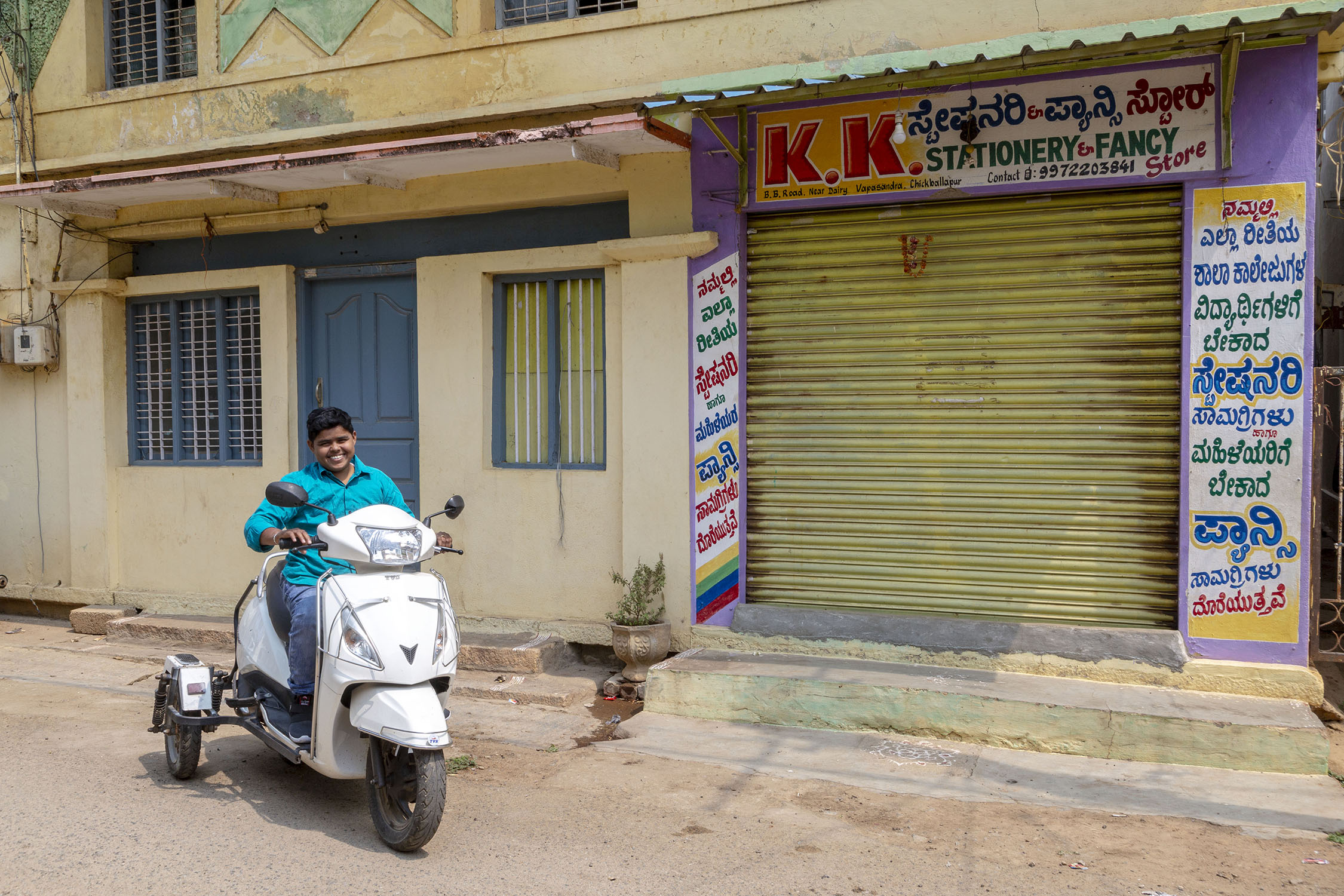 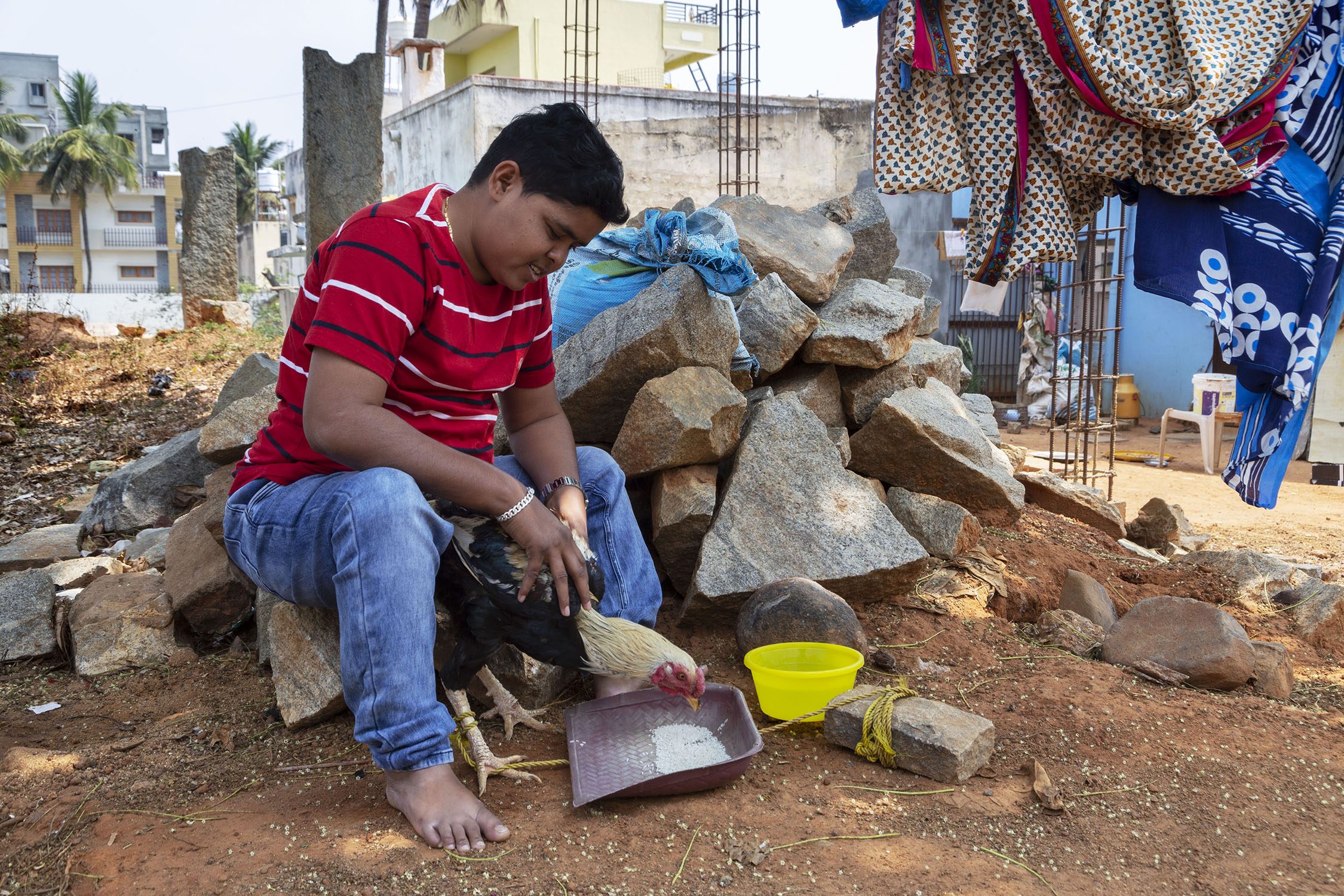 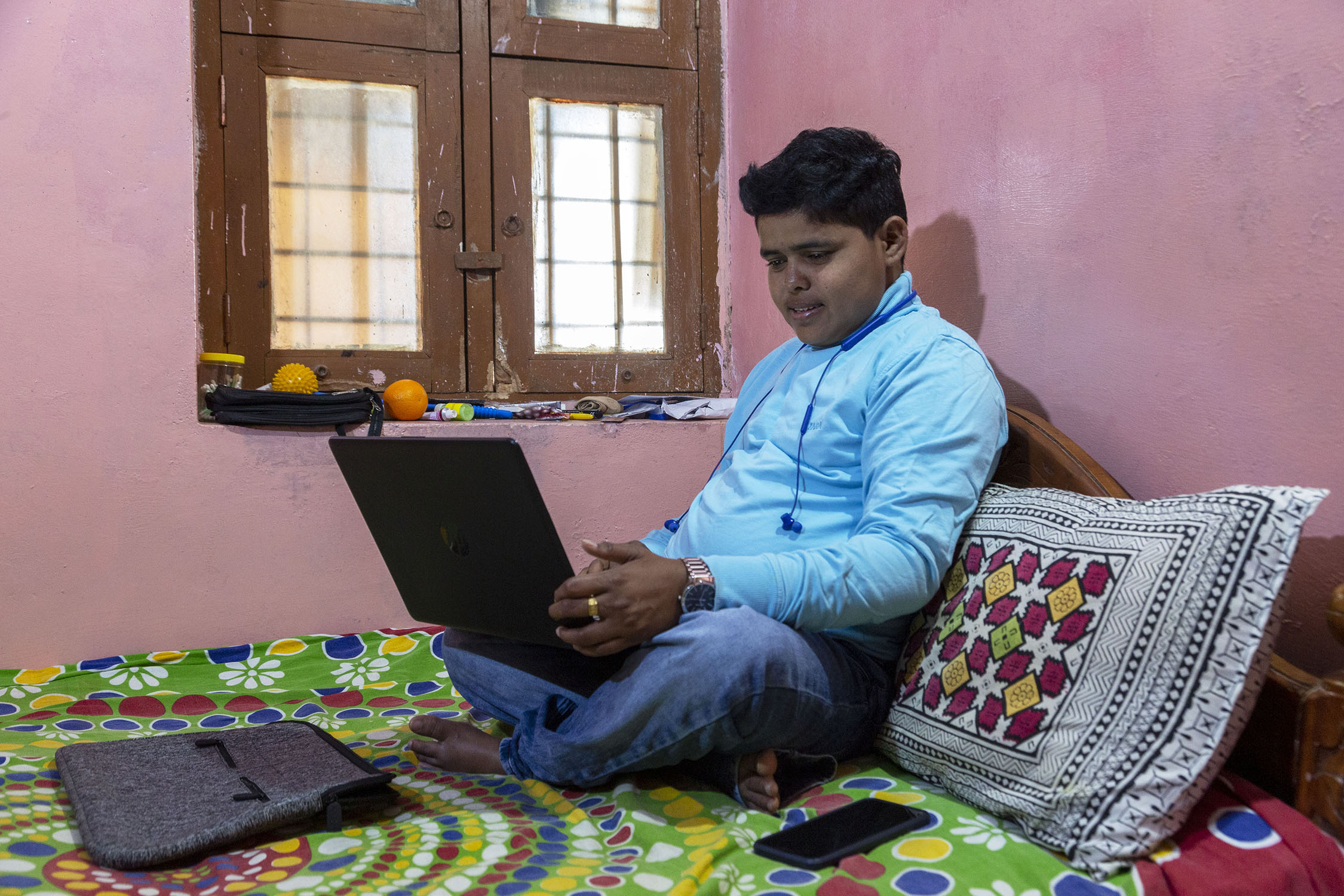 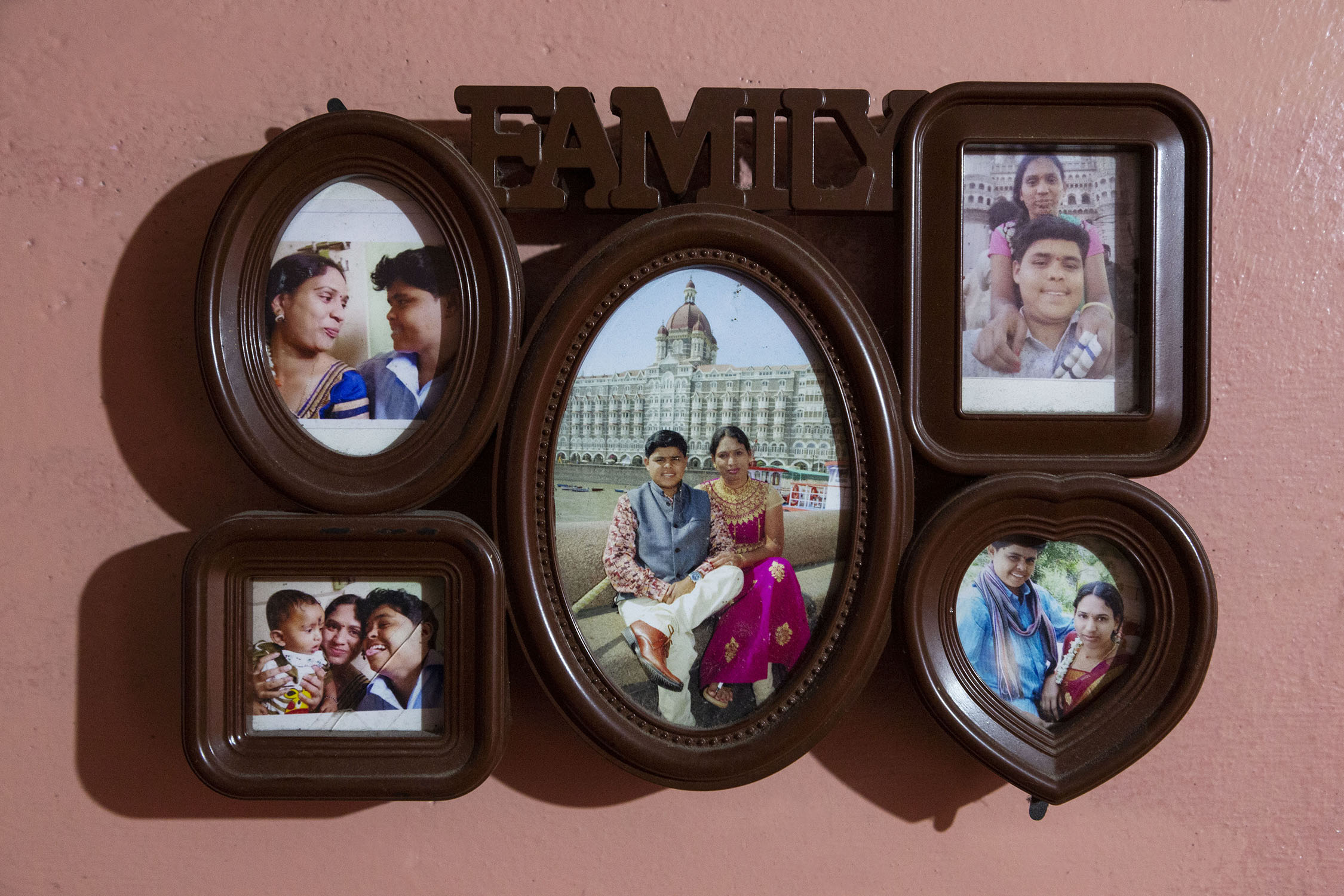 “Society always limits us, telling us we can only go thus far. Unless we go farther, how can we be free”

Those who visit Chikkaballapur, 60 km from Bengaluru, might chance upon a little shop, K.K. Stationery and Fancy Store, managed by a young woman, Kavya Nayak. Predictably, the two Ks represent her name and that of her 35-year-old husband Kiran B. Nayak. Not so predictably, Kiran is a transman. Their four-year-old daughter Ananya Sai completes the family.

Kavya was attending her father’s death ceremonies when we met Kiran, who exuded his usual vitality despite being plagued by spondylosis and rheumatoid arthritis. Extensive use of steroids took a toll on his internal organs and he has appealed for funds towards his Ayurvedic treatment. Despite his ailments, however, his fighting spirit is undiminished.

As a member of the nomadic Lambani community, Kiran grew up in the forested Hanuman thanda (tribal settlement) in Narsampet, Warangal district, Andhra Pradesh. Born a girl, he “was always in shorts and shirt”. Since he caught polio at age three, he was unable to attend the single-teacher primary school 3 km from his home. It was “Krishnamurthy-sir” who noticed the eight-year-old as he rode by on his scooter and stopped to ask his parents, who worked as agricultural labourers, why the child wasn’t in school. From the next day and every day thereafter, Krishnamurthy-sir personally conveyed him to and from school.

Under the schoolmaster’s guidance, Kiran made rapid academic progress, graduating high school and joining college in Narsampet. Besides facing accessibility issues, he found it deeply awkward to live in the girls’ hostel. He became best friends with Sarita, another disabled student. The 18-year-old took his first step into disability rights activism when he roped in six disabled fellow students to discuss an action plan for World Disabled Day. They took down addresses and wrote postcards to 1,000 disabled persons in Warangal district, inviting them to assemble at a local maidan to get disability benefits.

On 3 December morning, nearly 700 turned up – persons with disabilities (PwD) with their families! Kiran urged them not to budge until they were given certificates. The local authorities couldn’t handle the unexpected crowd. The local MLA hastened to the spot and made a promise that he was obliged to keep: to hold a medical camp where doctors would examine PwD and issue certificates. Kiran formed the Prajwala Disability Rights Foundation which covered 23 districts of AP in two years.

It was the beginning of an eventful personal and political journey. Sarita’s younger sister professed her love for Kiran and in the face of parental opposition the couple eloped to Tirupati and tied the knot in a mass marriage ceremony on 9 March 2008. Her parents filed a kidnapping case against Kiran and the subsequent media circus drove the couple to the very brink of suicide. Transgender rights organisation Sangama rescued them in the nick of time and Kiran and Kavya began their marital life in Bangalore. In 2010 Kiran got a fellowship from Aneka to work on transgender issues, for which he had to move to Chikkaballapur, where the couple has been living ever since.

Disability and transgender rights formed the two main planks of Kiran’s activism. He lost no time in identifying local problems and organising protests against the authorities concerned. But his strategy is: “First fight, then befriend”. His gregarious personality has won over many officials he raised his fist against and he has networked with the police, court and government department officials. His persistence resulted in government constructions being made accessible, such as the bus depot and the building that houses the District Commissioner’s office which has ramps, lifts, wheelchair for public use, and accessible toilet.

Kiran’s remarkable ability to build alliances and find common cause with other struggles has strengthened his relations with the local populace which now wholly accepts his sexual identity. He started the disability organisation Karnataka Vikalachetanara Sanghatane (KVS) in 2010 by cherry-picking a core team of around 15 people from economically weak and marginalised groups of different castes, religions and disabilities. KVS has a pan-Karnataka membership of over 12,000 today. It helps PwD to apply for the numerous cards, passes and certificates that entitle them to government subsidies. The computer training classes it started for PwD came to a halt during the pandemic.

In 2011 Kiran started Nisarga, which works for the transgender community and won a State award for social service. It now runs on its own steam, with Kiran being a mere volunteer. In 2019 he started the advocacy organisation, Society for Transmen Action and Rights (STAR) in Hyderabad. “The government should recognise transmen as a separate category,” he says. Although the Aadhaar card now has three categories – male, female and transgender – the state automatically presumes ‘T’ to mean transwomen and members of the Hijra community, and barely recognises the existence of transmen.

Kiran himself straddles more than one category. As an adivasi, PwD and transman, he is a singular example of intersectionality.