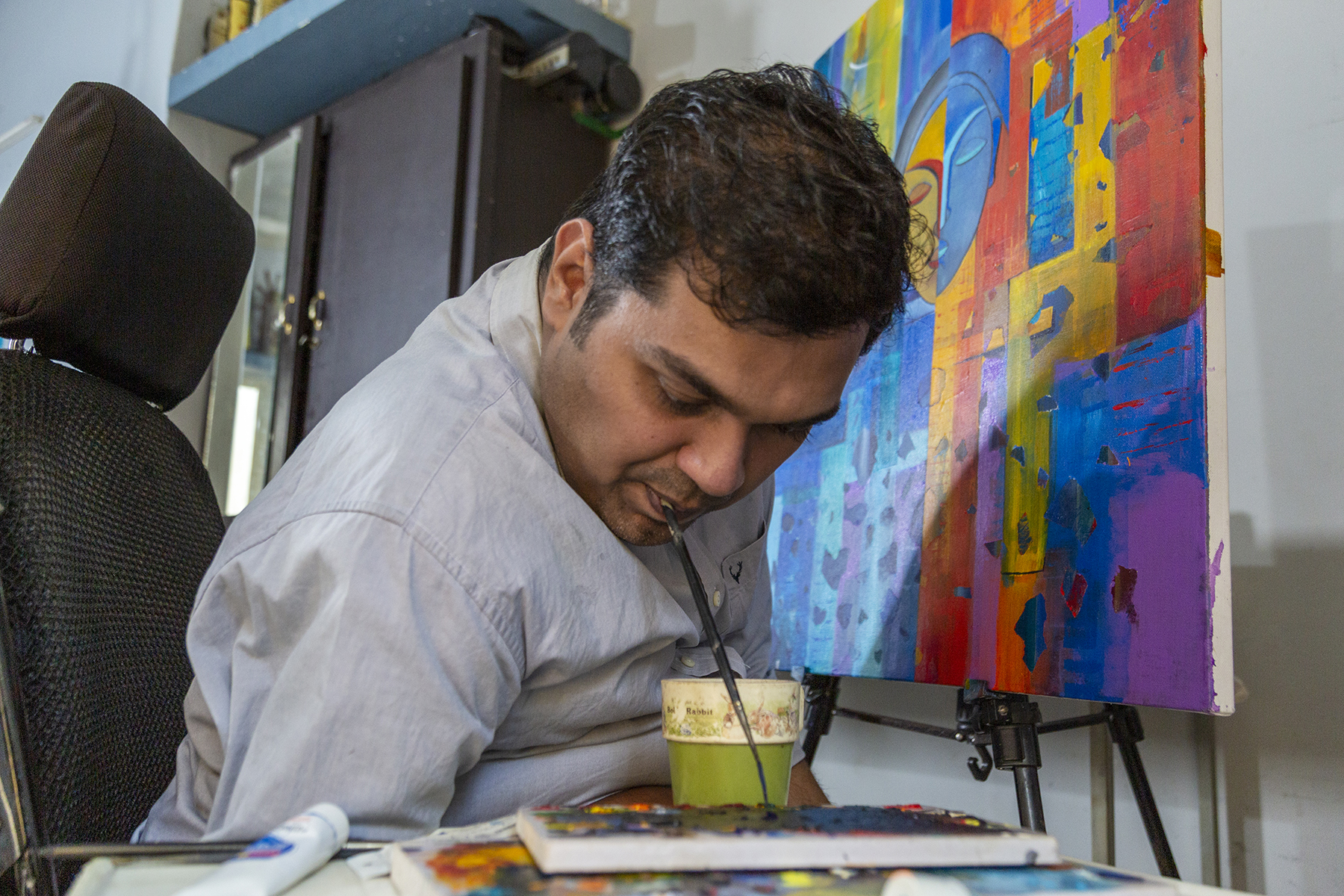 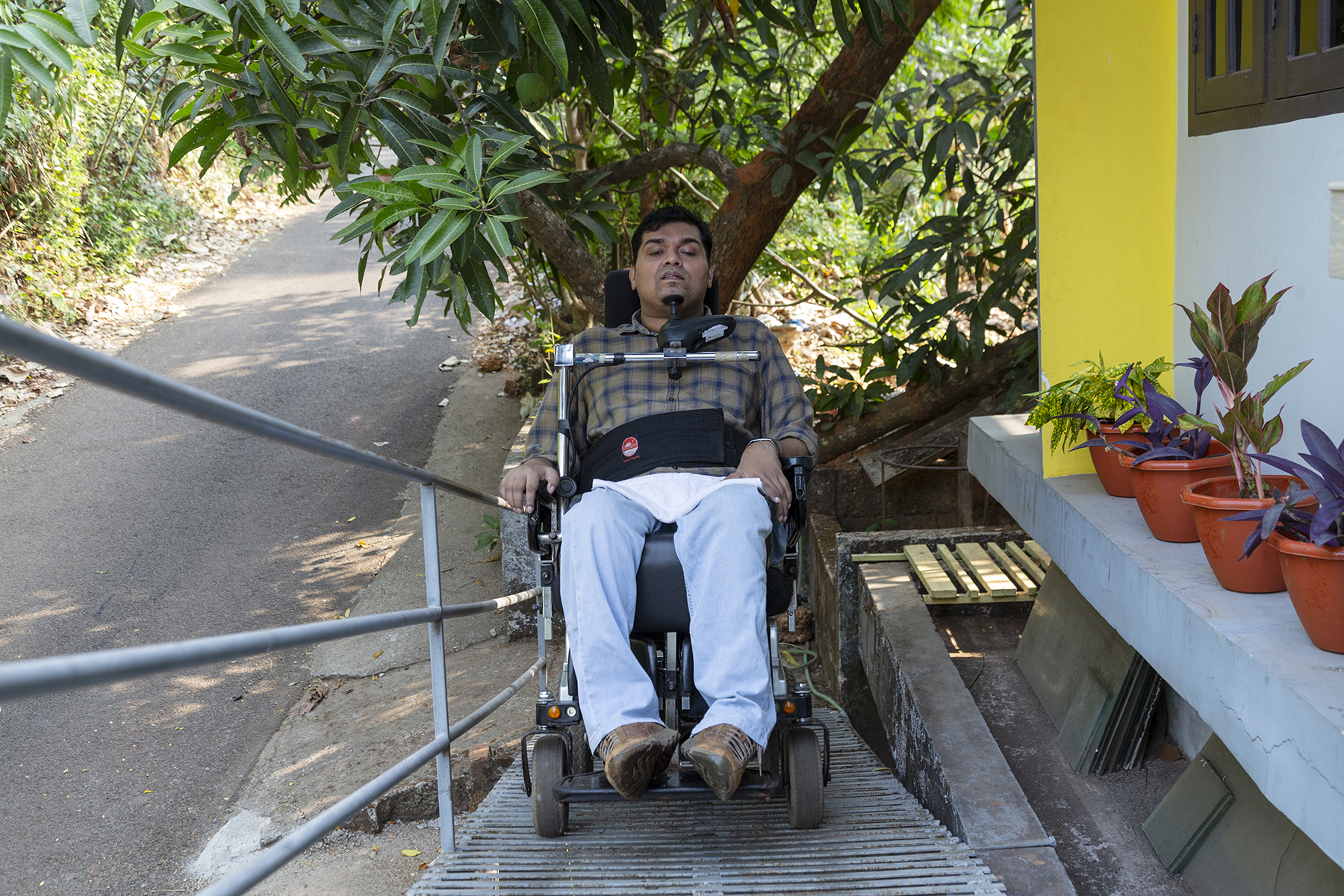 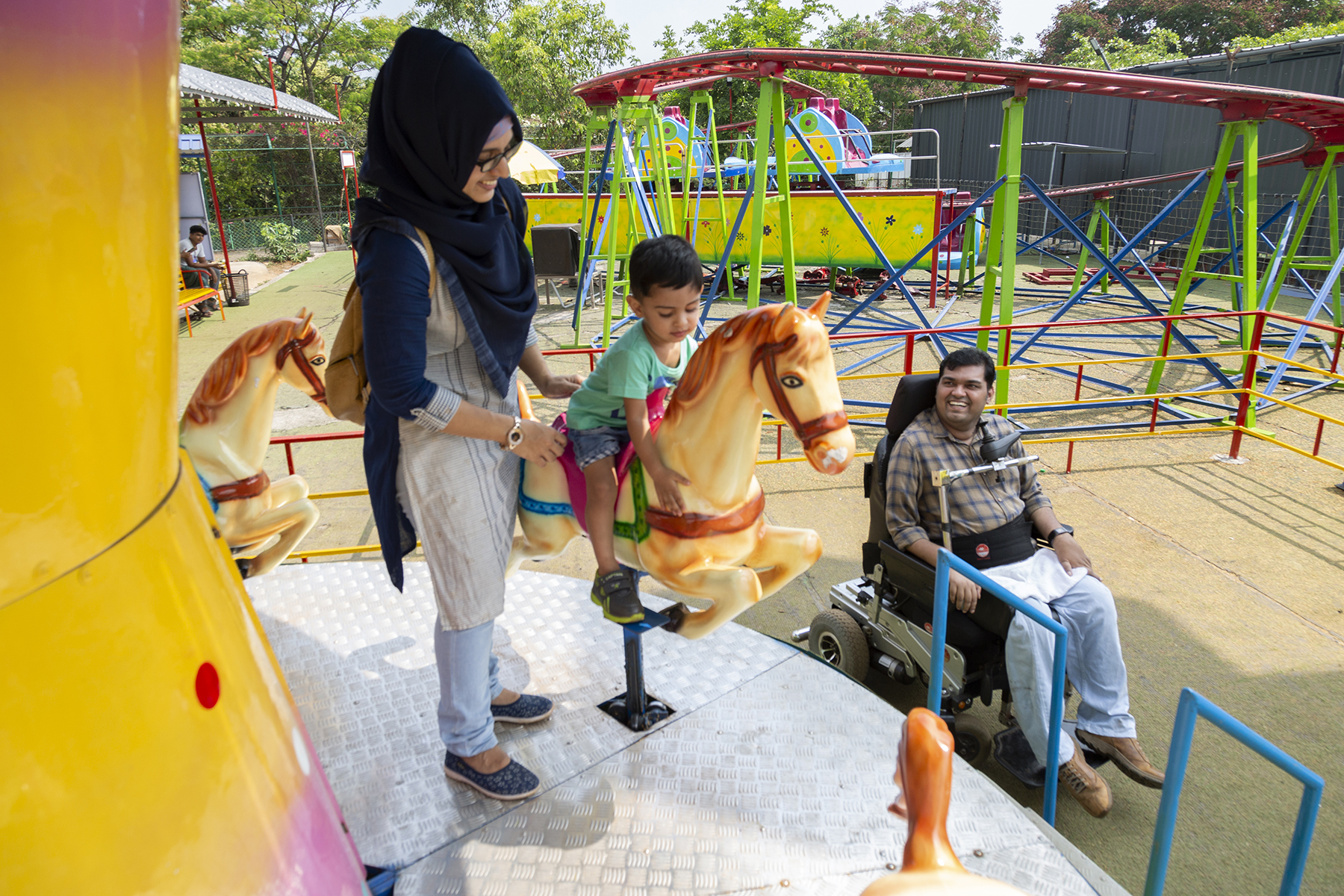 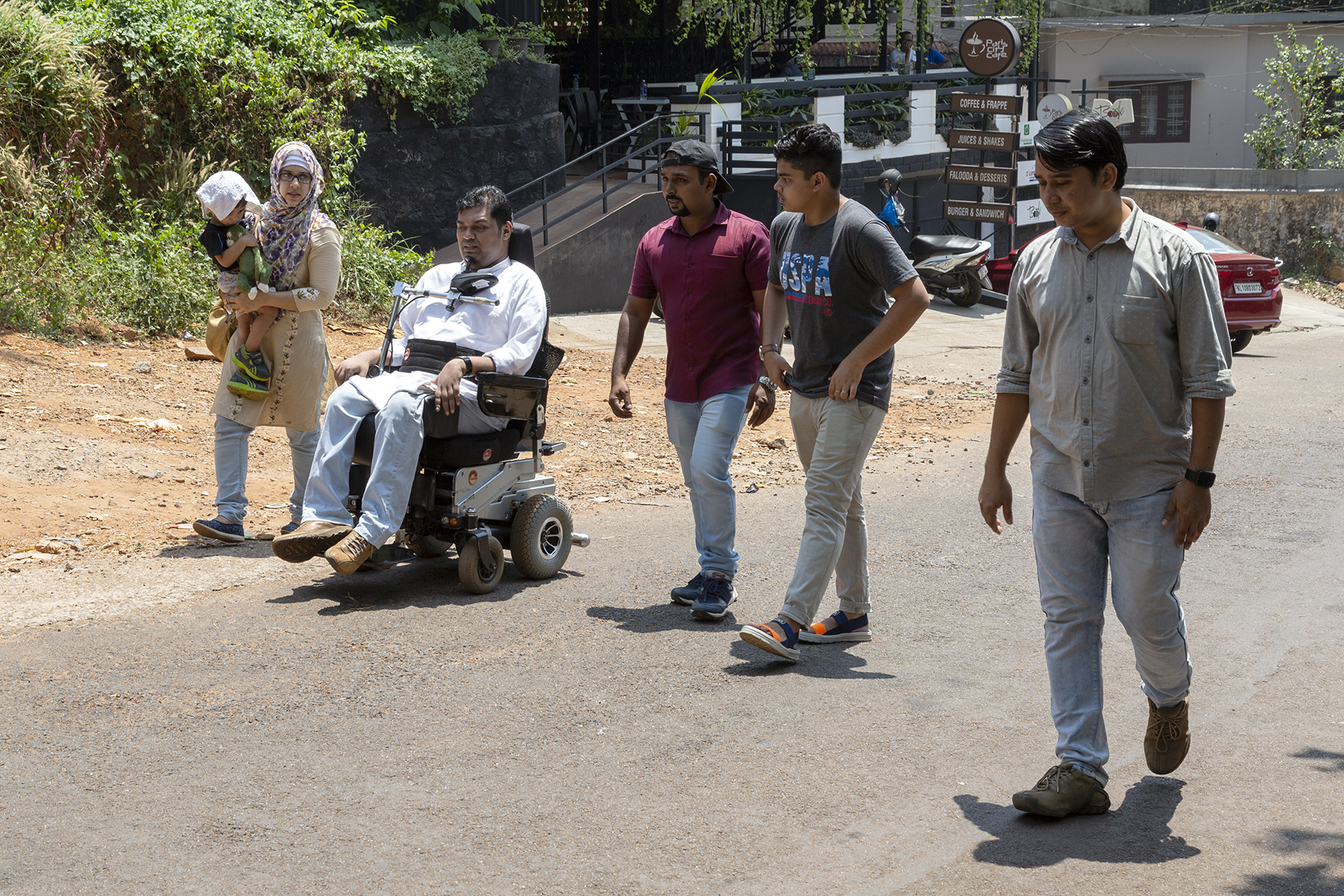 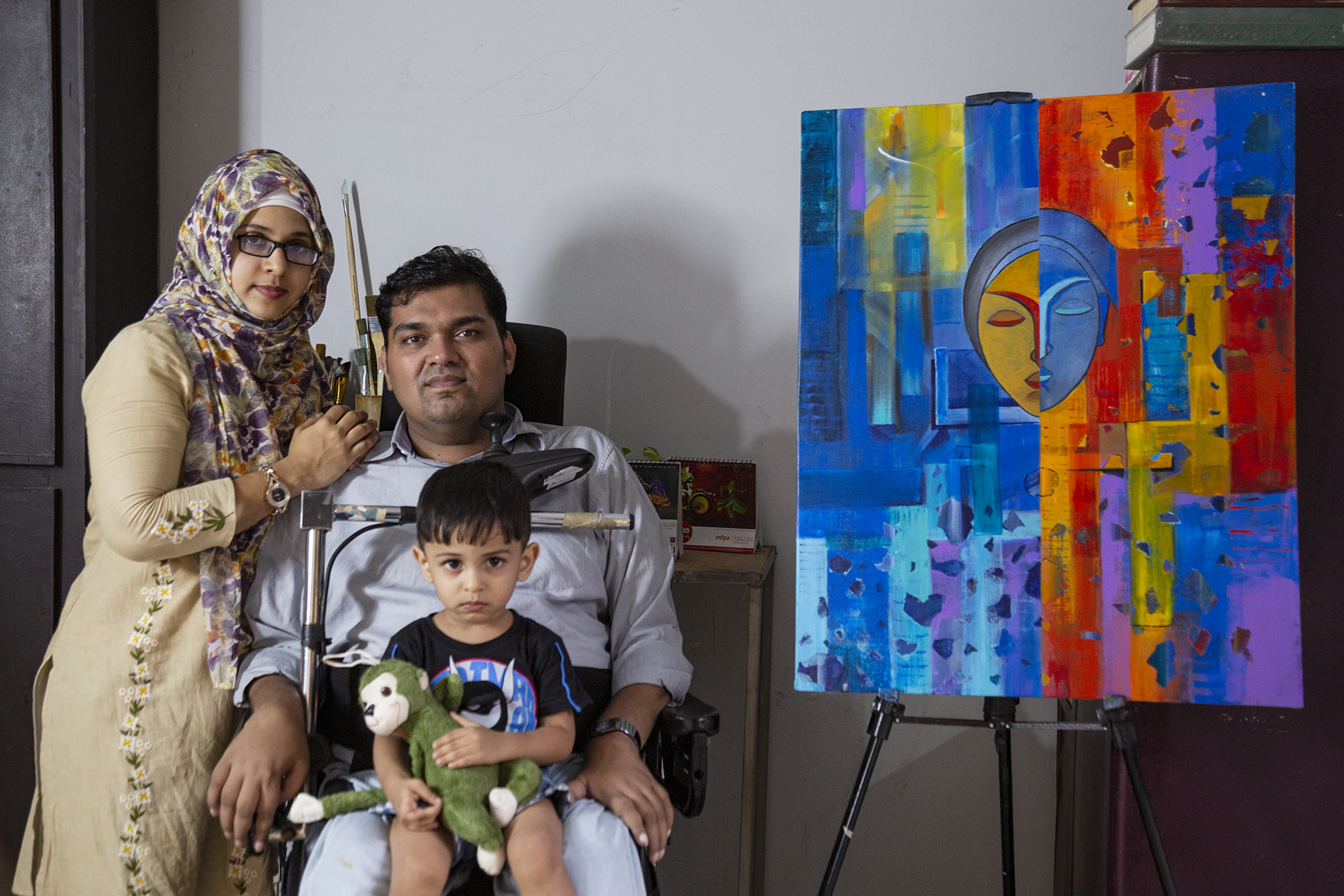 Fathima P.V. was born on December 3, the International Day of Persons with Disabilities (PwD). And heaven ordained that she fall in love with a PwD!

Fathima’s husband is Jesfer P. Kottakkunnu (35) from Malappuram, Kerala, an award-winning artist with neck-down paralysis who uses a customised electric wheelchair that he operates with his chin. He personally handed over his portrait of APJ Abdul Kalam to the former President. His 15 sq. ft. oil painting of the Ruler of Dubai and his son the Crown Prince hangs prominently in the royal palace. His artwork has been exhibited across Kerala and in Mumbai, Bangalore and Singapore. In April 2021, World Art Dubai exhibited 15 of his paintings.

Jesfer developed symptoms of muscular atrophy from age five, and by Grade 5 he couldn’t walk. His upper body muscles also weakened, and at 15 he could no longer write in his diary or draw cartoon characters from Jungle Book. Ayurveda and homeopathy temporarily raised his hopes only to destroy them. “I actually planned to commit suicide,” he recalls. “I had even marked the date!”

The date elapsed. “When you reach the height of dejection, a surprising moment occurs as if God has shown you the way.” He started drawing with his mouth, holding an eraser-tipped pencil between his lips. “When I used the eraser the pencil point would pierce the inside of my cheek and make it bleed. My eyes would ache because my face was so close to the page. But I carried on.” With persistence and practice he improved his skill. He graduated to watercolours and acrylic (oils are only for portraits).

Jesfer did not limit himself to art. With activist Raees Hidaya and others he co-founded Green Palliative, an NGO that addresses disability and social and environmental concerns. Fathima, a Malayali raised in Oman, used to respond to Jesfer’s posts on Green Palliative’s social media group. The two began to discuss art, poetry and life. They grew closer, lengthy phone conversations followed, and when Jesfer proposed he found she’d been waiting for his offer! “Then our conversations took on a different colour. We began video calls.” He described the severity of his disability in elaborate detail but it made no difference to her decision.

In November 2015 Fathima got her flight ticket ready and just two days before her departure she told her parents of her plan. Jesfer met his bride for the first time when she landed at Calicut airport. “We got married on November 30 and Fathima actively participated in the December 3 programmes.”

Their son was born in 2018. Fathima, who is a published poet, suggested the name Kenzal Rumi. One imagines an older Kenzal’s friends listening spellbound as he describes his unusual parents and the poetry of their lives.