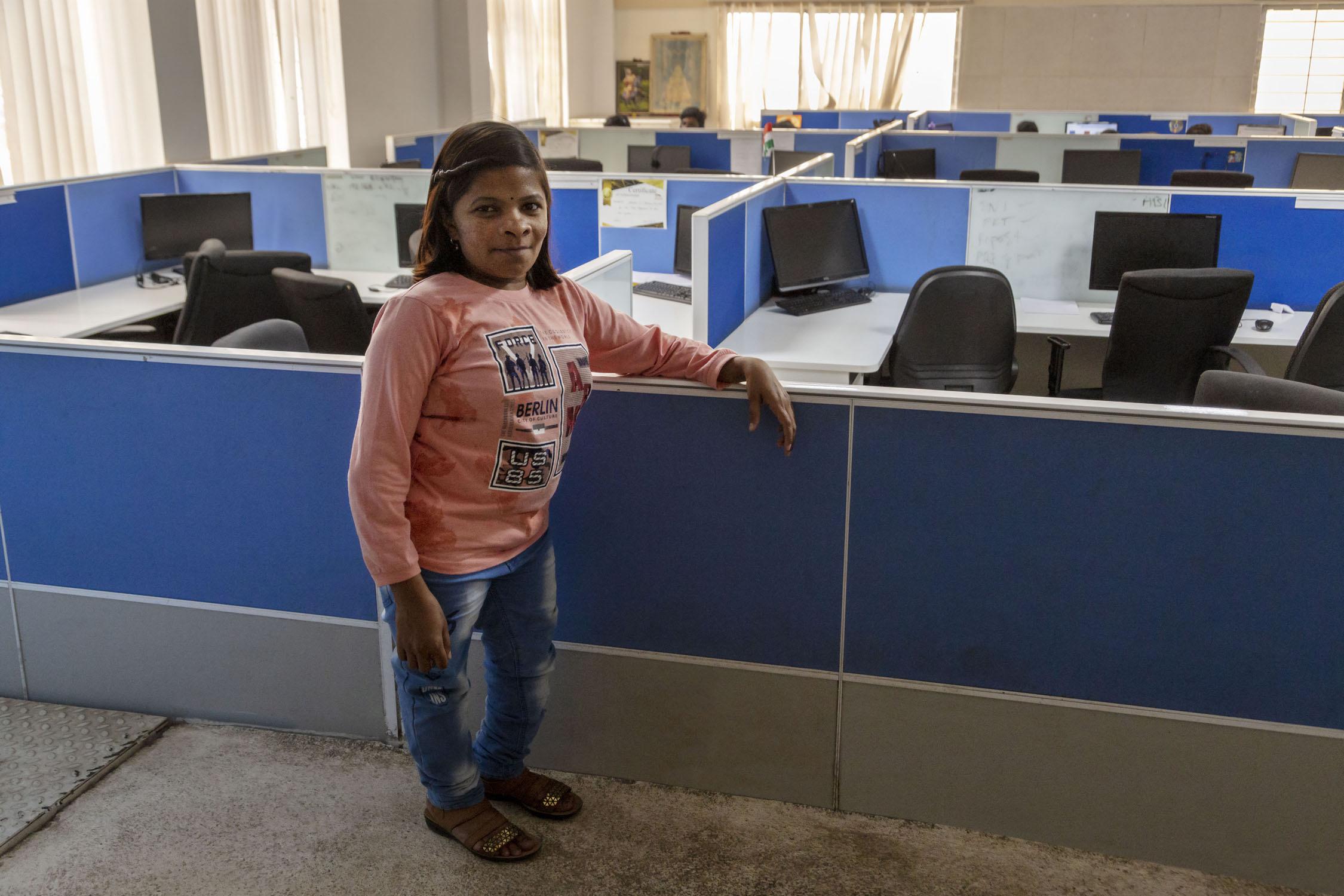 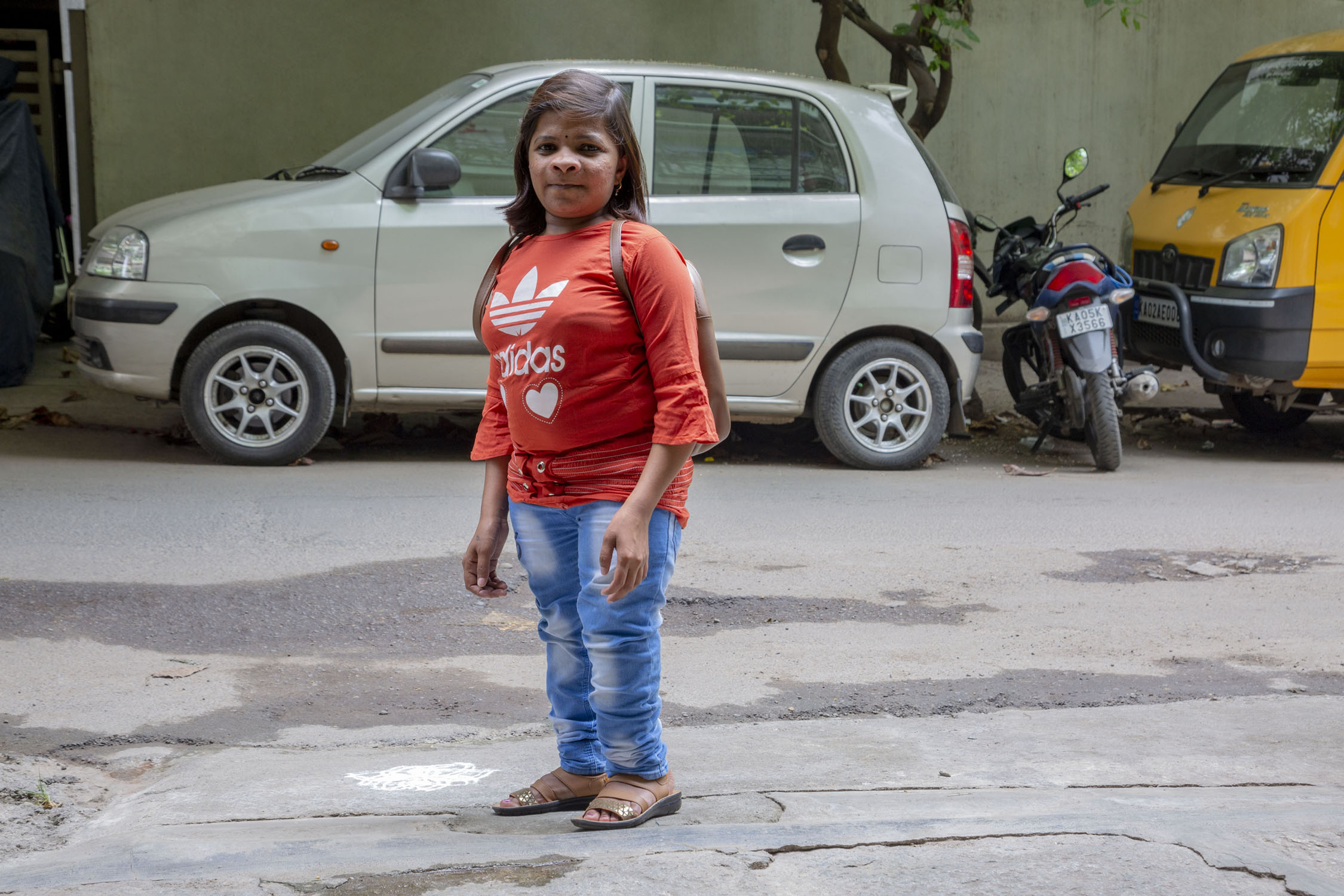 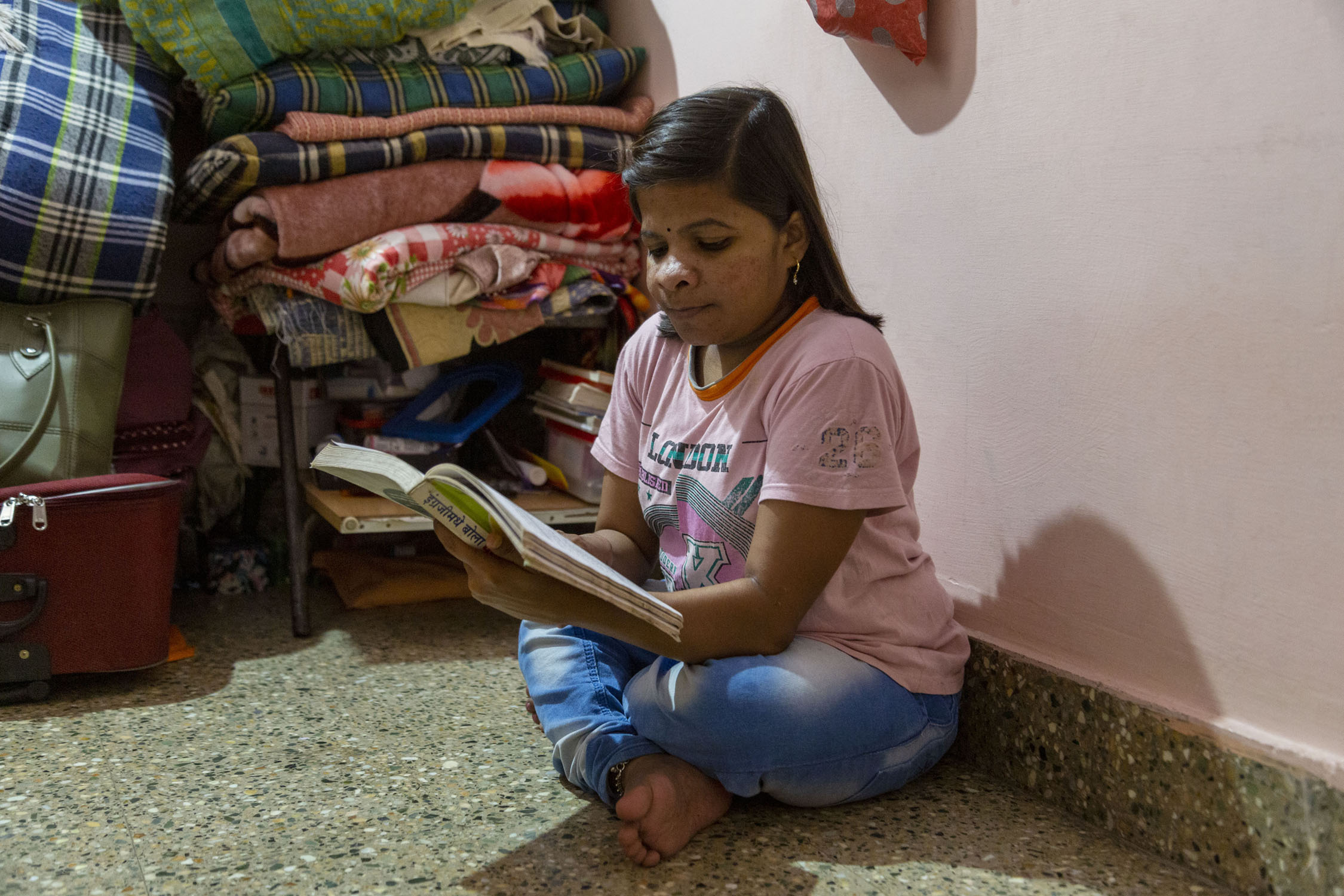 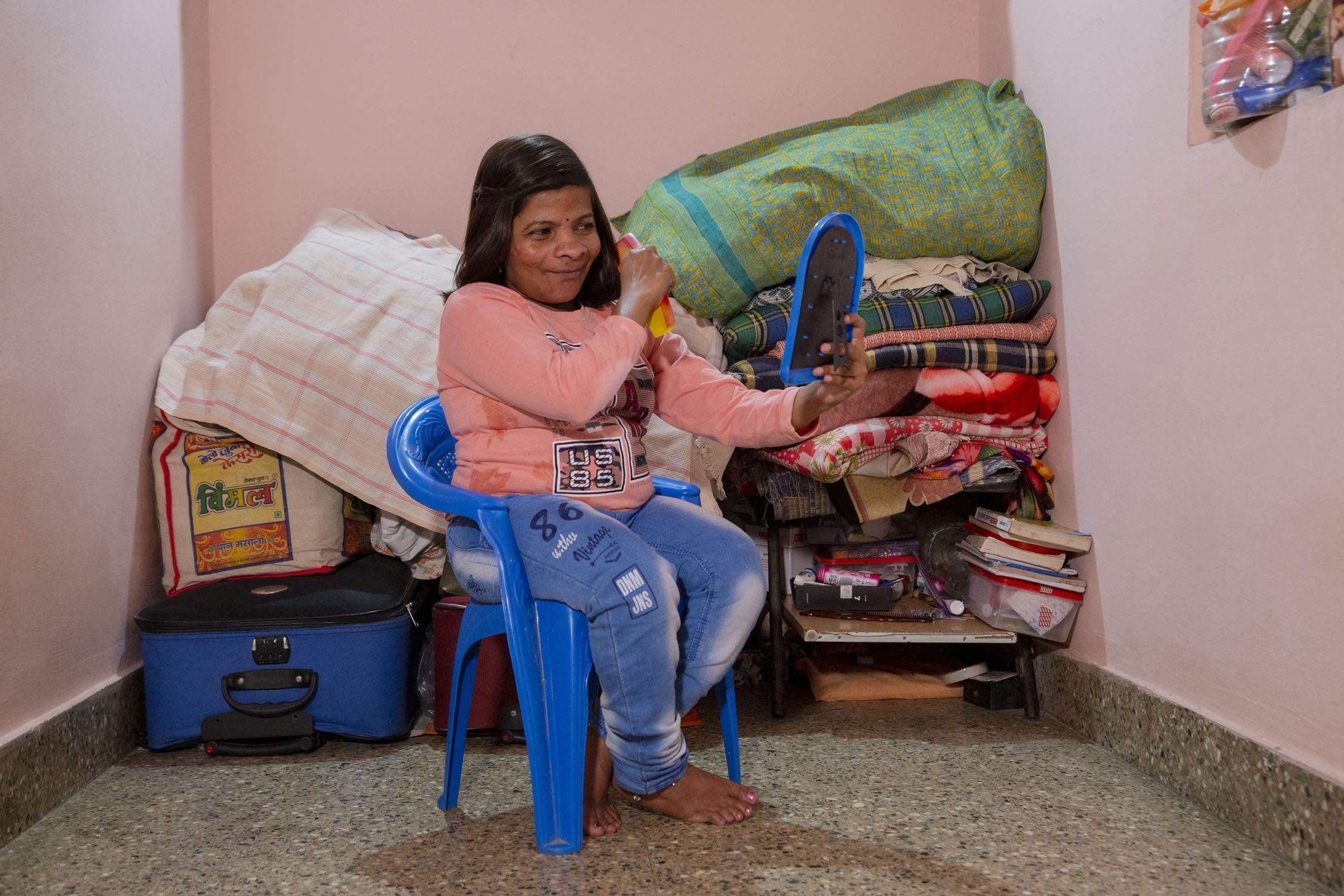 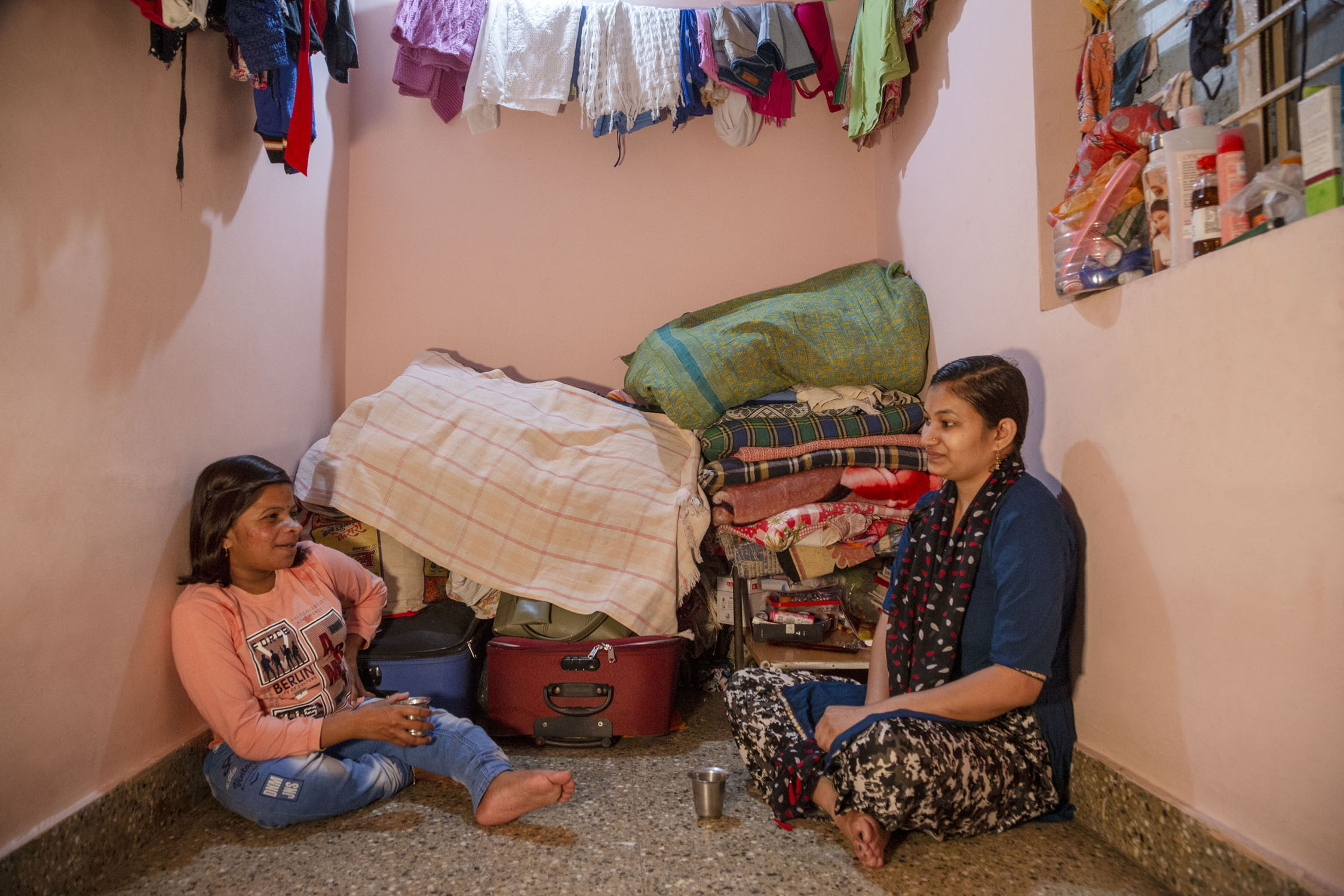 All those people who used to laugh at Darshna Shinde and call her ‘Choti’ (‘shorty’) because of her dwarfism must be laughing on the other side of their face today. The 26-year-old from the district of Belagavi (previously Belgaum) in Karnataka contributes to her family income with earnings from her job in Bengaluru. She recently renovated their 1-BHK (bedroom-hall-kitchen) house, getting a toilet built and tiles laid for the mud floor.

Darshna’s father Maruti Shinde migrated from Satara in Maharashtra to the village of Madabhavi in Athani tehsil. He worked as a labourer but started blowing up his earnings on liquor, leaving his wife Vitha Bai to shoulder the burden of providing for the family of six. As an agricultural worker earning daily wages of ₹50 to ₹100 she could barely feed her four children. “There were days when we lived on only buttermilk,” Darshna recalls.

When she was around four years old Darshna would cry continuously because of body pain. Her mother took her to the doctor who told her that her child would not grow because her “bones are weak”. Despite her early struggles with maintaining her balance and grasping objects her strength improved and she went to school.

When she was in seventh standard her sister, who had passed the tenth, got married and went away to Sangli in Maharashtra. This left Darshna in charge of her sister and brother, who were respectively 10 and 11 years younger than her, while their mother was at work. She also used to cook and pack lunch for everyone, and put up with her verbally abusive father. Her studies suffered as a result but she managed to complete her tenth and start PUC (pre-university course). However she failed the PUC exam which she wrote in 2014 and felt disinclined to continue her education.

In 2015, acting on the suggestion of a local acquaintance, she travelled to Bengaluru to do a one-year course in Office Management. At the training centre she learnt to use the computer. It was thanks to the guidance of “Rekha-madam”, a trainer at the centre, that she sought and found a job at the BPO firm Vindhya E-Infomedia. After 20 days of training she was ready to work. She joined in 2016 on a monthly salary of ₹6,900 and earns almost double that today.

Darshna clocks in at around 9.30 a.m. and finishes by 7.30 p.m. She doesn’t have a long commute because she shares a room near the office with two others. It is thanks to Vindhya that she learnt how to communicate fluently, she says. She enjoys her job speaking to customers to remind them about the DTH recharge for their cable network or loan repayment of their EMI. She doesn’t mind being called in to work on a Sunday since she gets a compensatory day off.

Back home in Madabhavi the situation is pretty much unchanged with Vitha Bai still working in the fields to support her husband and her son, now in tenth standard. Darshna’s younger sister is married to a man she fell in love with. Once in a while she takes a holiday to visit her older sister in Sangli. “I like the vada paav you get there,” she says. Gulab jamun is her favourite sweet. Does she have a favourite pastime? She enjoys listening to songs and humming along. Oh, and before bedtime she usually gets her nightly fix by watching an episode of the true-crime series Crime Patrol.