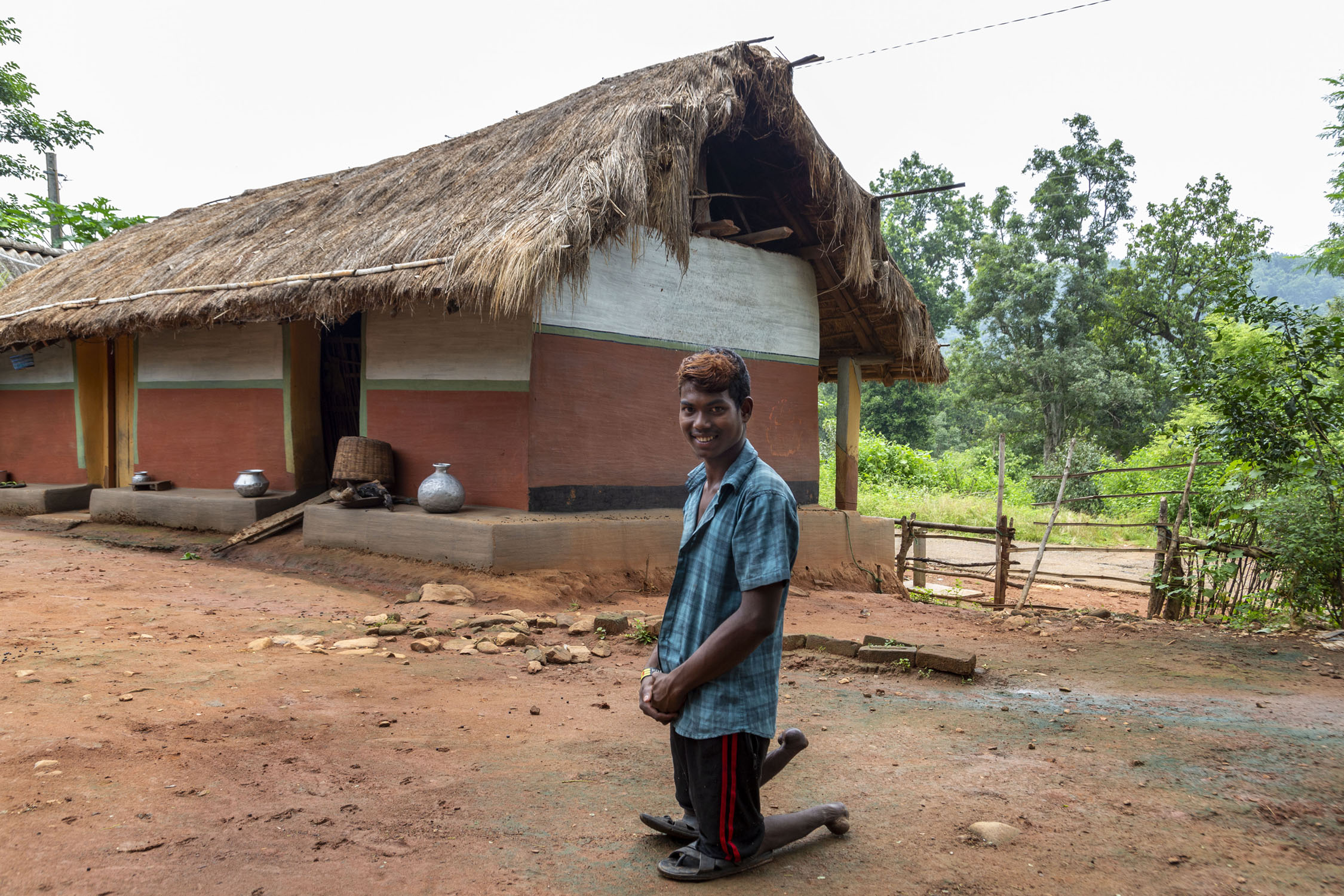 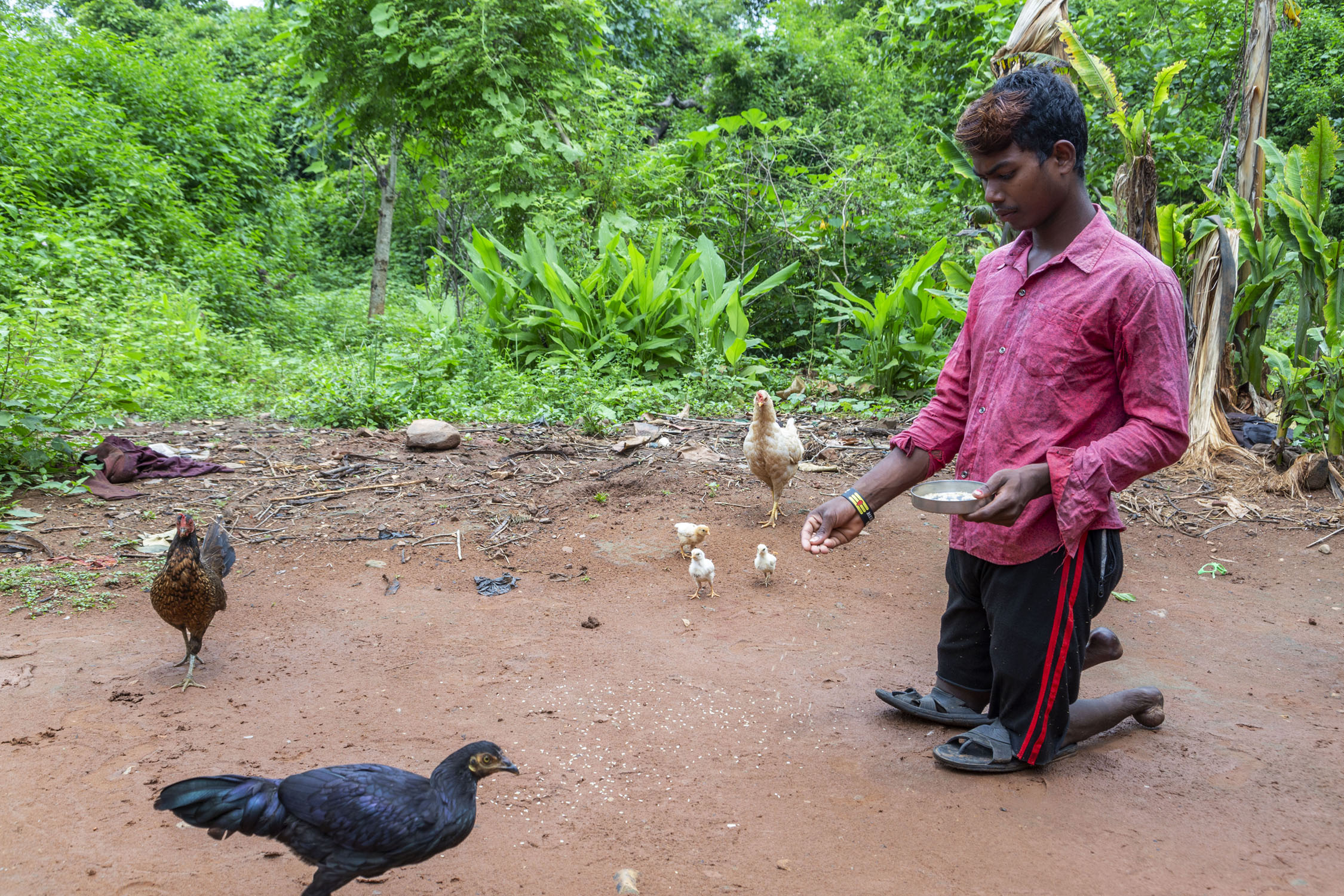 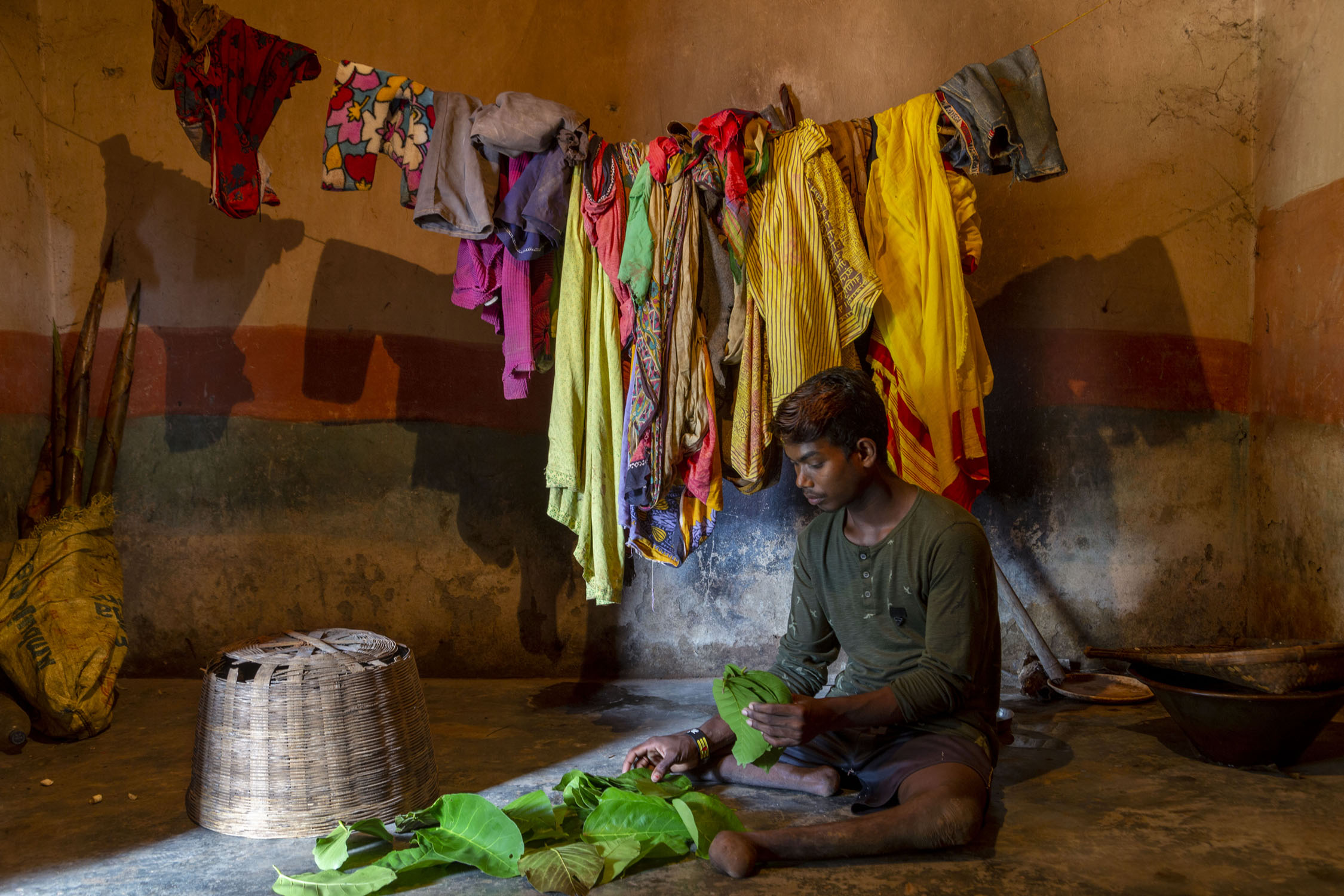 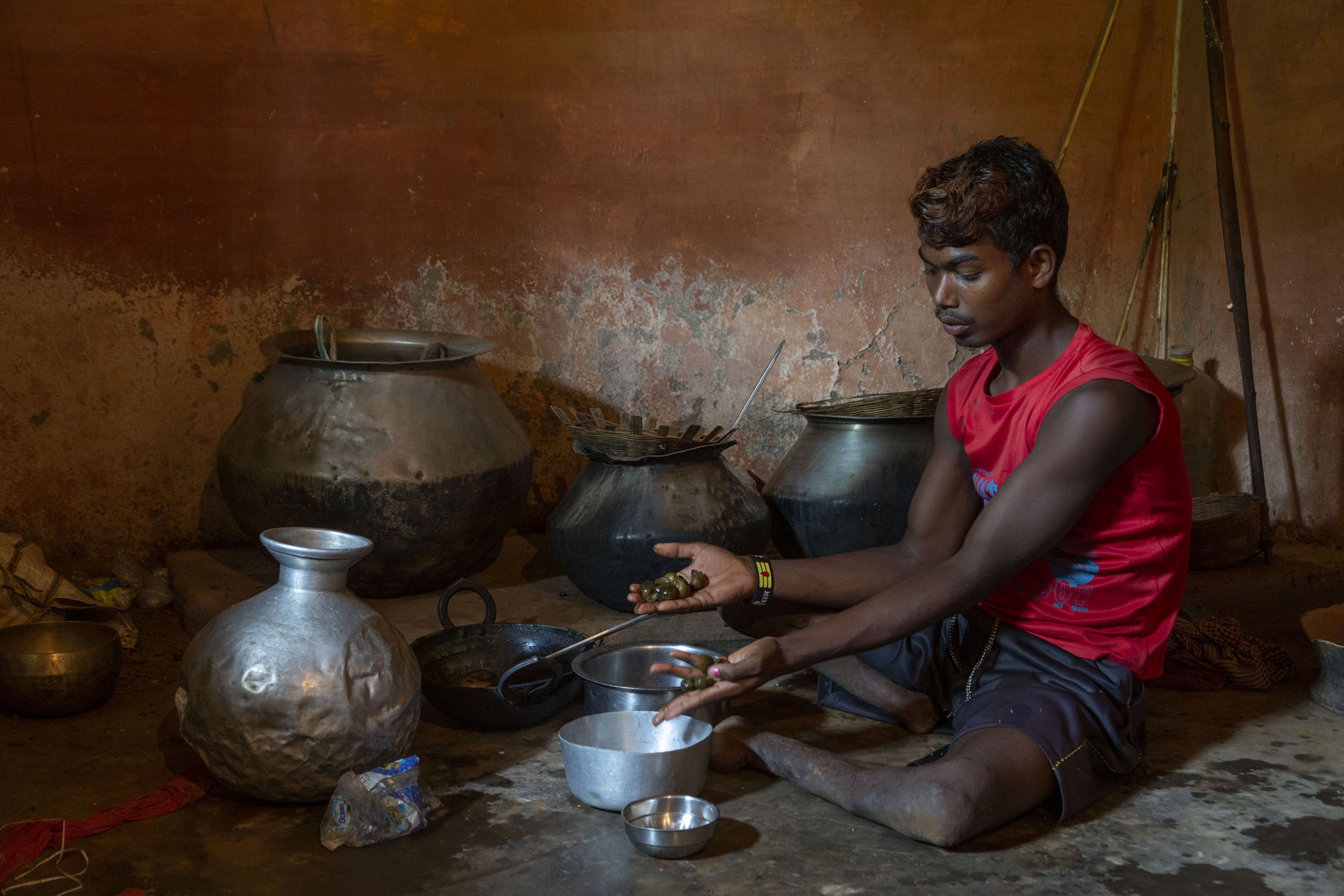 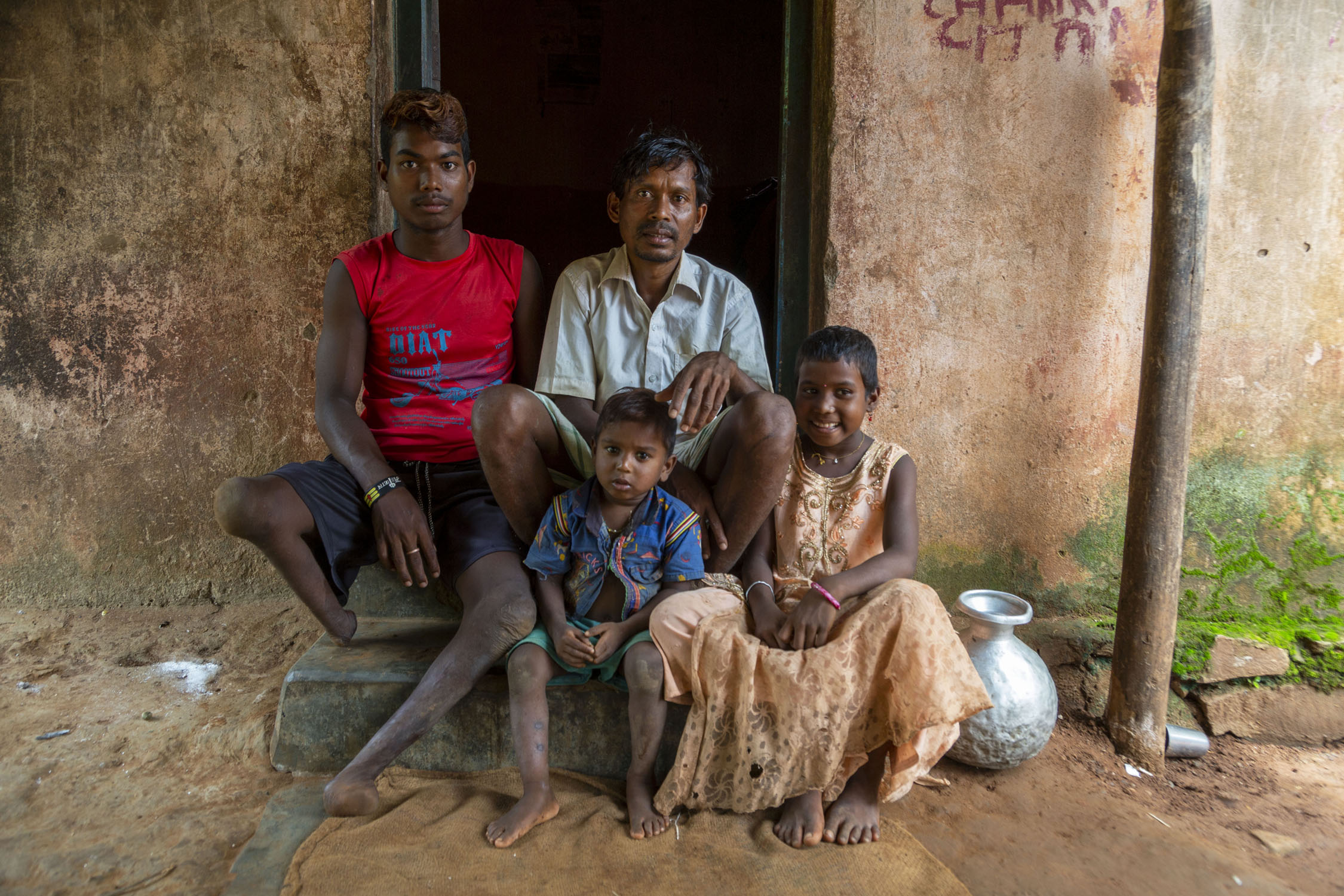 “What can a disabled person do?”

The logistics of interviewing 18-year-old Chhotray Hembram from Odisha resembled a military operation. You are already familiar with our modus operandi: Vicky travels far, wide and deep for a photo shoot of a PwD (Person with Disability) and passes on their phone number to the writing team. In 2021 he burrowed really deep to capture Chhotray who lives in the tribal region of Ghatkuanri (population roughly 700) in Bangiriposi tehsil, Brahmangan gram panchayat, Mayurbhanj district.

Chhotray was supposed to speak to us on the phone of his ‘neighbour’ (it was unclear how distant he was from Chhotray’s hut). Finding a writer who could speak Odiya was the least of our problems; he simply could not get through to the neighbour. Vicky sought the help of a woman working for an NGO. Then we discovered that Ghatkuanri was a dead zone, cellphone-wise. No signal. So the woman would have to transport Chhotray more than 25 km to the nearest town where ‘network’ is available – Bangiriposi.

Vicky arranged a suitable date and time with the NGO woman. Our writer called her after they reached Bangiriposi but then another problem cropped up. Chottray had never in his life used a mobile, so he didn’t know how to speak into one! The woman acted as the intermediary but she was in a hurry: she had places to go, things to do. Our writer could scrape together just a few facts.

Chhotray’s father is a daily wage labourer and when he isn’t going into the jungle he works in someone’s field or farm. One winter’s night, when Chhotray was young, he was sleeping next to the lit, earthen chulha (firewood stove) as usual. His parents had warmed their innards with some country liquor and were fast asleep. The sleeping child’s feet touched the flames and caught fire. The couple did not hear his screams in time to rescue him. Both feet were severely damaged.

Chhotray has been walking on his knees ever since. His education ground to a halt. His younger siblings go to school but he doesn’t know which grades they’re in. Besides doing household chores like feeding and tending to the chickens and farm animals, he sometimes makes and sells leaf plates. There is a weekly market in the village where he has created a makeshift table from bamboo, and this ‘stall’ is where he sells from. He wishes to open a vegetable or grocery shop near his house; this again would be a rudimentary structure with thatched or tarpaulin roof supported by bamboo poles, and a table on which items for sale are placed. He says that he can grow some vegetables and procure the rest from Bangiriposi.

When asked what he does in his spare time he replies, “What can a disabled person do?” It was as if we had asked an irrelevant question. He used to help a shopkeeper nearby who gave out public address systems (mikes and so forth) on hire. Occasionally Chhotray uses his catapult to bring down mangoes and other fruits, or to kill birds which he then eats. The NGO woman interrupted at this point to harangue him on the importance of conserving birdlife. Poor Chhotray said apologetically, “Last year I killed only one bird!”

We have many answers to Chhotray’s rhetorical question, “What can a disabled person do?” But those answers make sense only if the right kind of assistance is able to reach PwDs even in the least accessible corners of the country. Vicky contacted Punyasloka Panda, Ashoka University alumnus and a core team member of Youth for Sustainability India Alliance, who is a trained career counsellor. Towards the end of 2022 Punya made the three-day journey to get acquainted with Chhotray’s environment and realised that simply giving him a lump sum to set up a grocery shop was not feasible. In this region of endemic poverty, there are apparently three or four pairs of eager hands waiting to grasp the money! In fact his family seems none too keen to see him financially independent and a frustrated Chhotray is reportedly yielding to addiction.

Punya is planning yet another trip to Ghatkuanri. He is not ready to give up on this young man whose predicament cannot be resolved through quick-fix solutions but only through different forms of appropriate support.