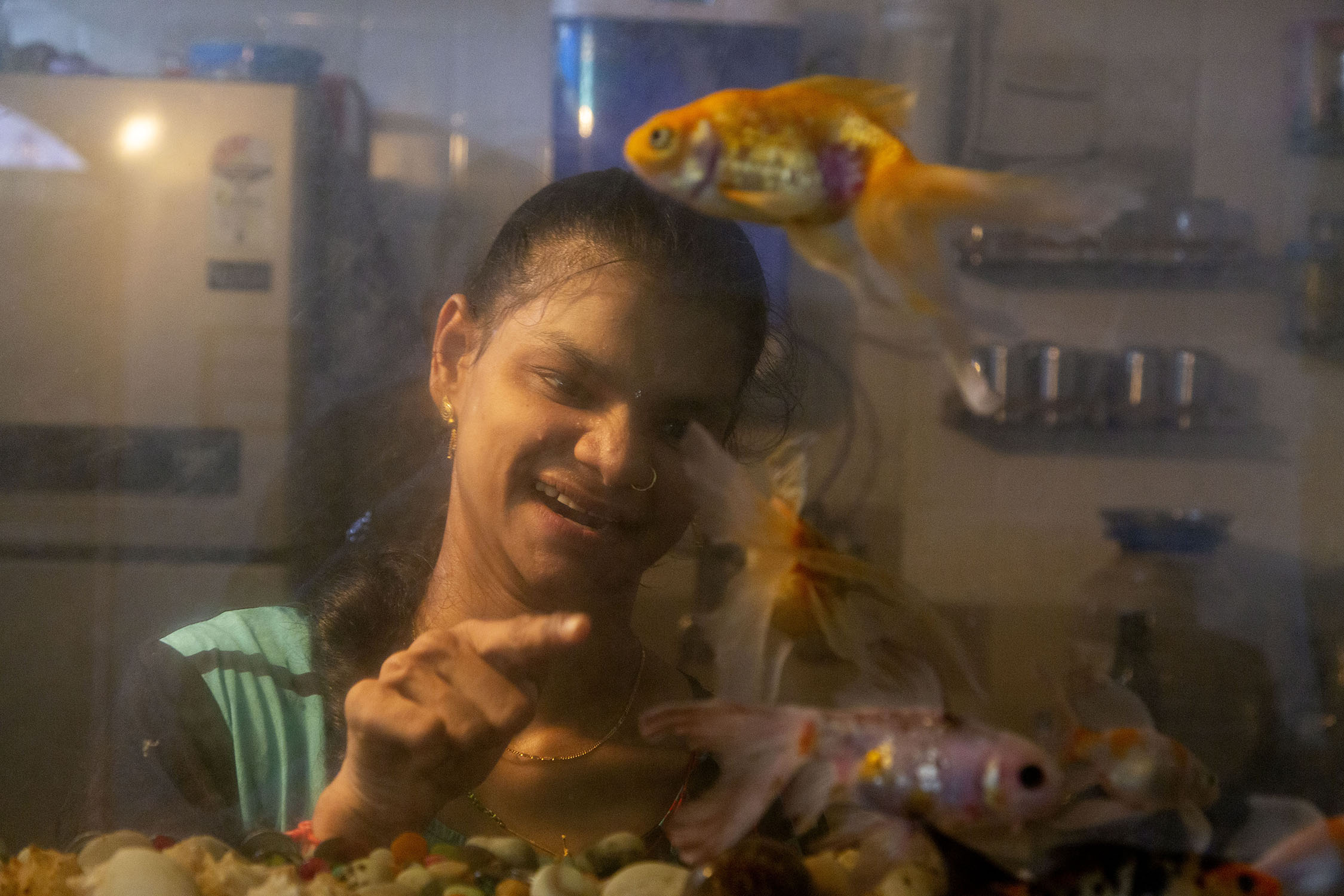 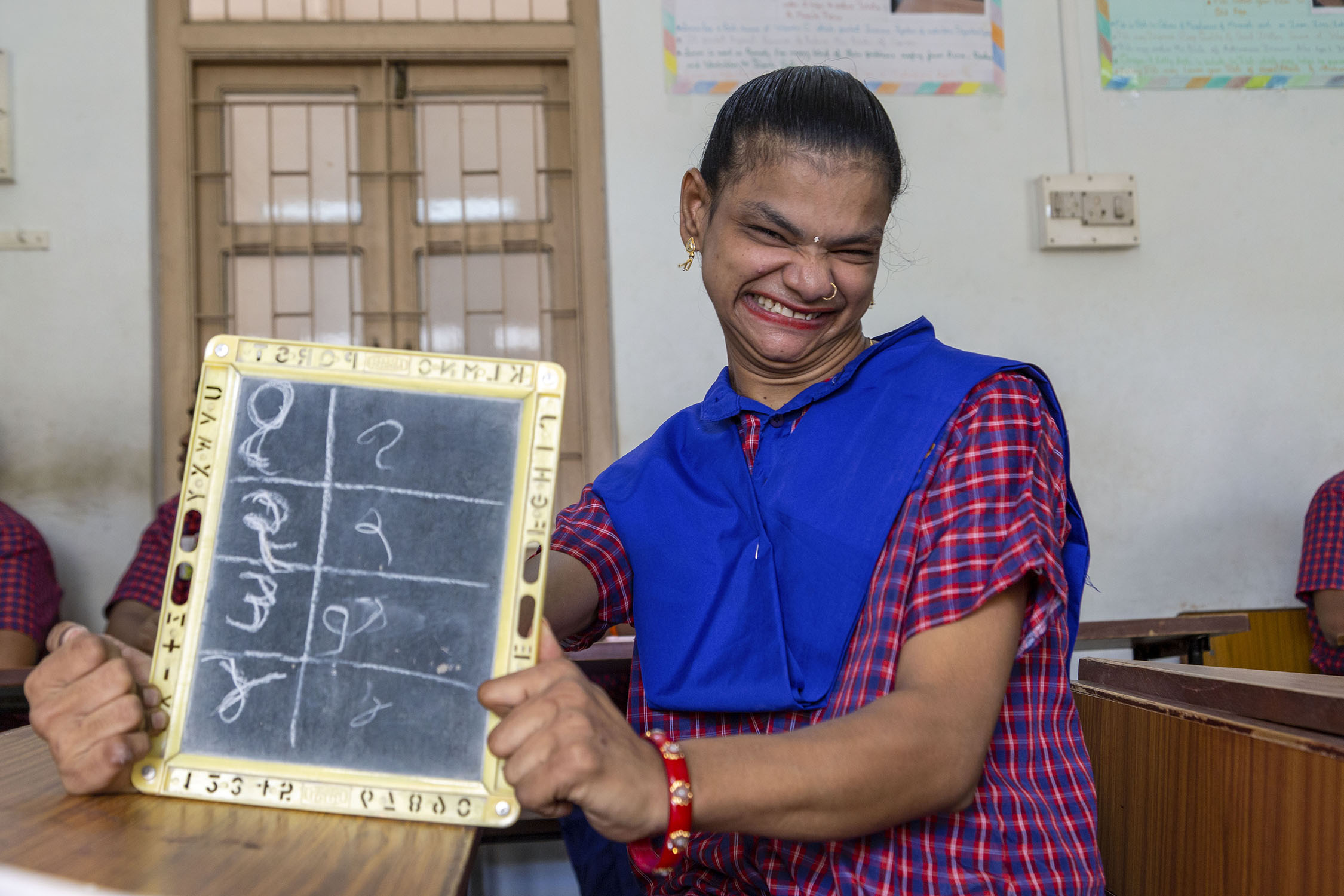 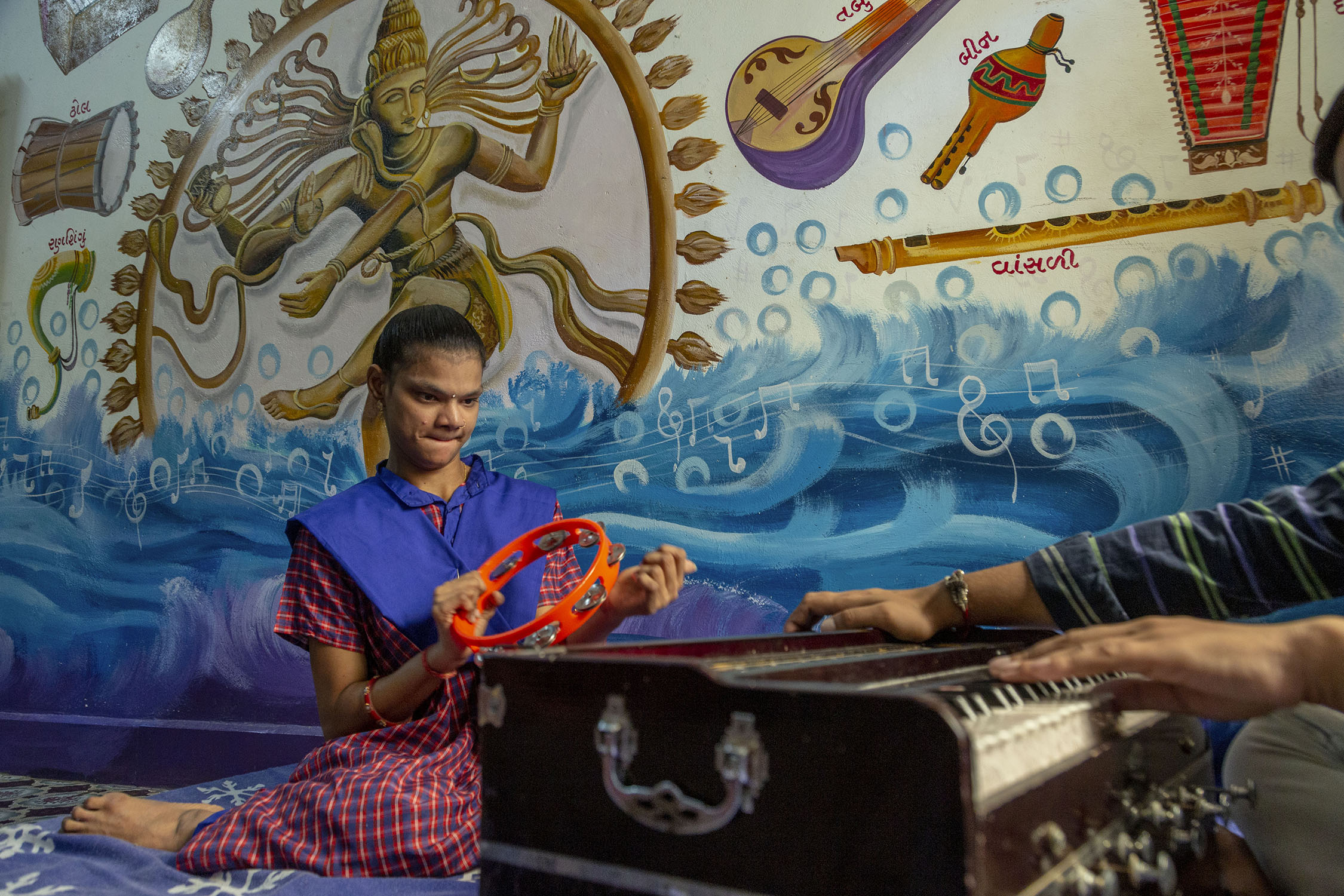 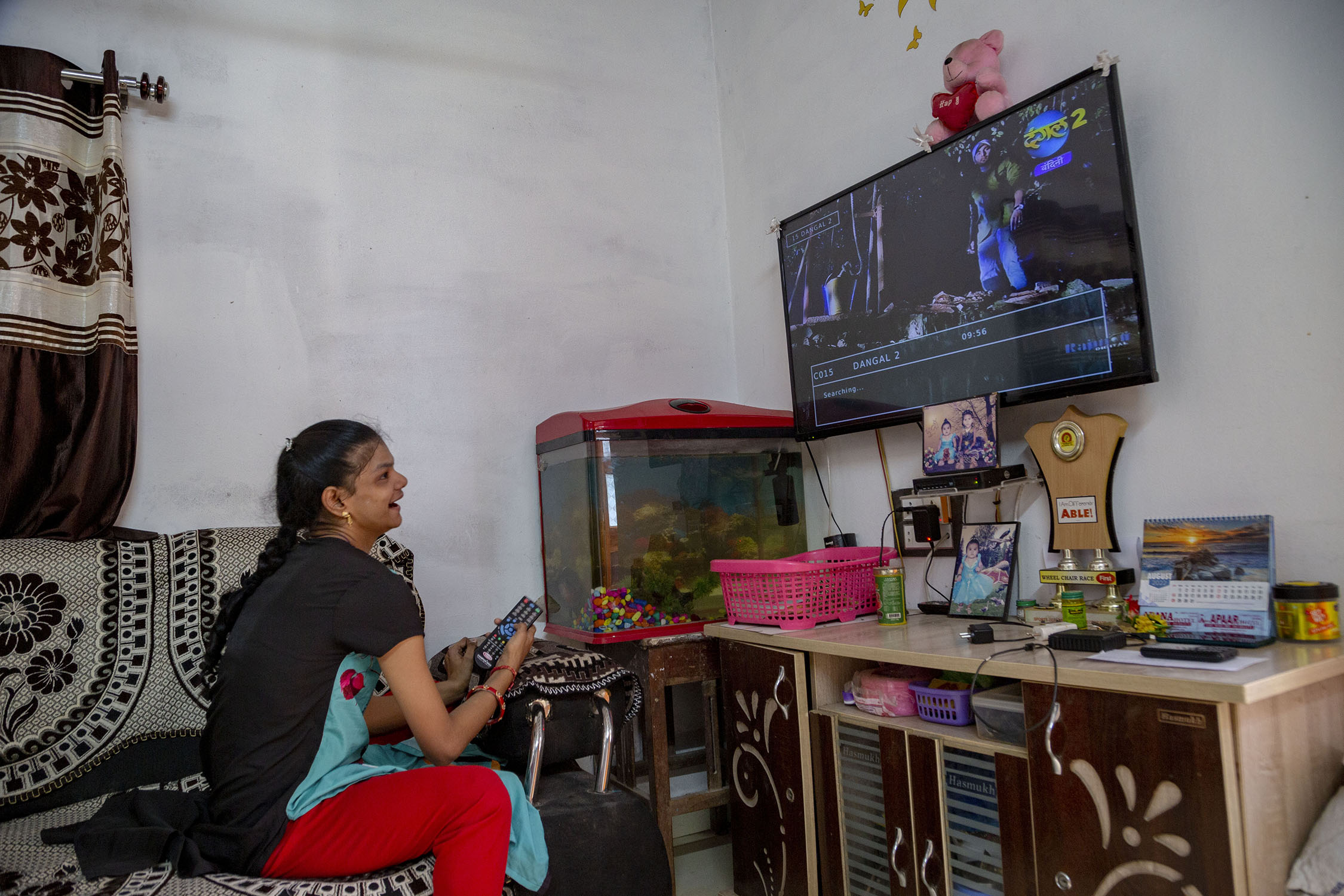 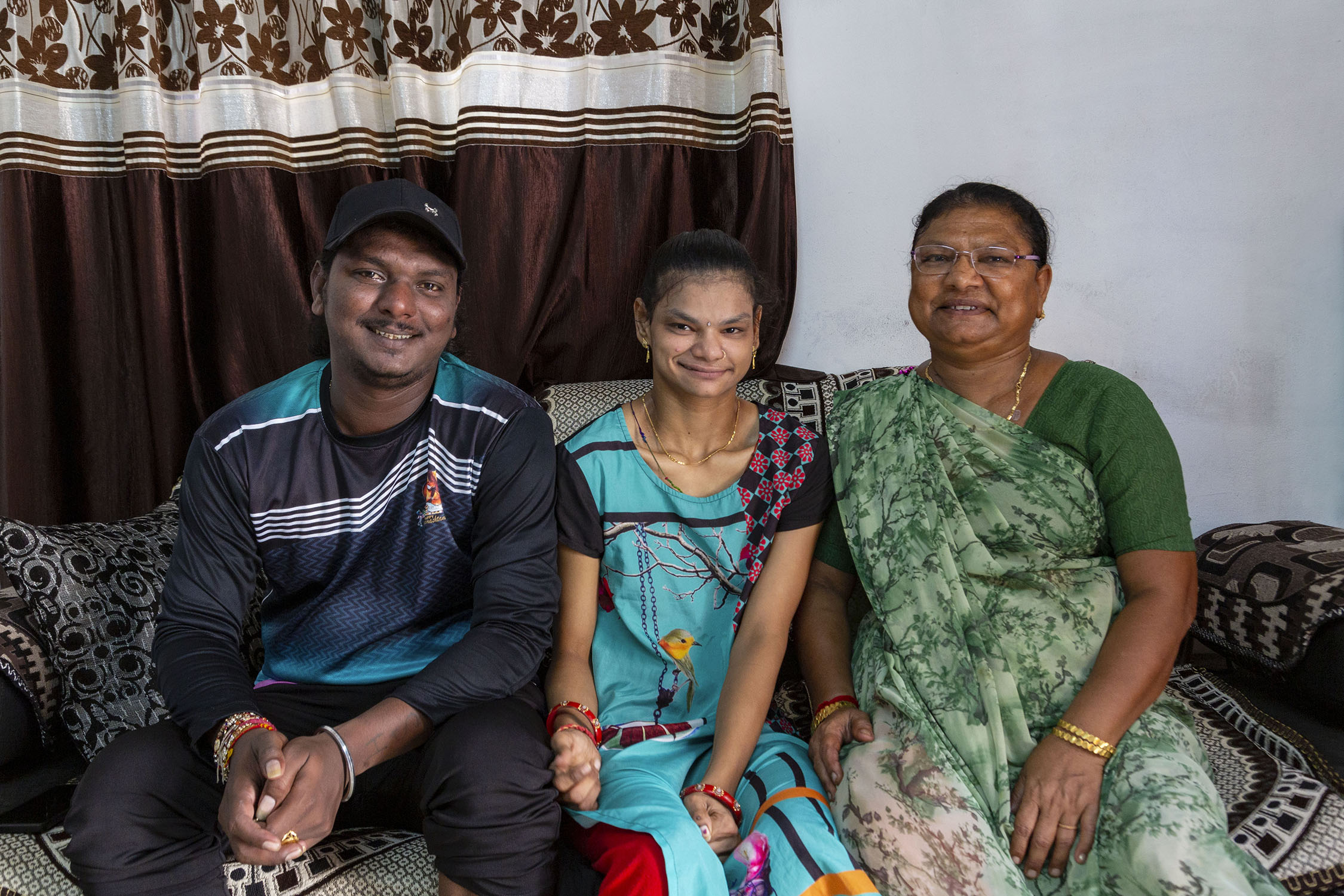 Her black eyes flash and sparkle, often with excitement but sometimes, when she is in a bad mood, with anger. Asmita Ratilal Kapadia (28), who lives in the union territory of Diu, has Cerebral Palsy (CP) but is a bundle of bubbly enthusiasm. Although she has no speech she likes to be around people and greets them with a palm-folded ‘namaste’.

Asmita’s father Ratilal Kapadia was a fisherman. He died when she was around four and her mother Jayabehan started selling fish in order to bring up her five children: daughter Bhartiben, son Ashwinbhai, another daughter who had CP but who died aged four, Asmita and her younger brother Manish. Jayabehan could feed her kids but not educate them all – Manish alone finished high school. Fortunately they had their own roof over their heads – a roof that they only recently upgraded to concrete.

Given their dire situation, the chances of Asmita making progress would have been slim to zero. However, Diu was fortunate in having Vatsalya Special School, started by the venerable Usmanbhai Vora whose son Rizwan has CP. Jayabehan recalls that Asmita had to be carried to school when she joined in 1999 as she could neither walk nor sit up. In a few years her mobility had improved radically: by the age of six she could sit and could walk using a stick, and by eight she was able to manage her daily routine on her own. She could wield a spoon, started eating on her own, and could dress herself.

Physical coordination and fine motor skills are always a major struggle for those with CP; their bodies tend to experience jerky, uncontrollable movements. In Asmita’s case, CP has also affected her ability to speak and she communicates through gestures. She was 18 by the time she managed to manoeuvre her fingers to be able to write. But she has improved remarkably over the years. She even won a trophy in a wheelchair racing contest held by the Diu government in 2015!

Dancing and playing musical instruments are part of the school curriculum and therefore the students get ample practice in moving their limbs in synch. Vatsalya has 15 people on the staff looking after children who have various disabilities such as CP, autism, intellectual and learning disabilities. It doesn’t charge fees and provides free food, uniforms and transport. After they turn 18 the students are given vocational training. They learn to operate the stove, make tea, fold and iron clothes, and perform other tasks that would aid their independent living. They also make doormats, candles, paper bowls and other handicraft items which the school sells in the market. The proceeds go to meet operating costs.

“Usmanbhai takes care of them as if they are his own children,” said Jayabehan, speaking through a local interpreter Nilesh who translated from Gujarati. “It is like he is part of our family.” A rickshaw picks up Asmita to take her to school by 9 a.m. She is given breakfast at 10.30 and lunch at 1.45 and by 5 p.m. she is dropped home, said Jayabehan. The short, real-time videos that Usmanbhai sent us of Asmita with the other students were revealing. We saw her executing dance steps to music, and pairing up with Rizwan to weave doormats and make candles.

Physiotherapy exercises are an intrinsic part of Asmita’s regimen and Manish often assists her in doing them. Manish, who is 25, does not have a steady income and mostly helps out his mother at home. Ashwinbhai (30) is a hotel worker and Bhartiben (32) is married and stays in a nearby village.

Asmita is fond of putting on makeup and loves perfume. Wearing new clothes is a special joy. Non-vegetarian food tickles her palate and she adores fish. In her spare time she mingles with neighbours, plays with their children, plays games on her mother’s mobile and watches Star Plus TV serials late into the night. She loves to travel and has visited all the popular tourist spots in Gujarat – the Statue of Unity is next on her list.